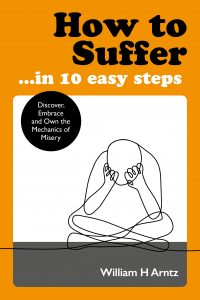 What inspired you to write How to Suffer… in 10 Easy Steps?

One night I walked by my wife who was lying face down on the living room couch. When I asked her if she wanted to go into the kitchen to have a drink, she just groaned (her back was out). I asked again, and she said, “I just want to lay here and suffer. I’m perfecting my suffering.” I stopped, laughed, then said, “Perfect it? Someone needs to write a self-help book on “How to Suffer.” I said it in jest, or so I thought. But a year and a half later, the book was written.

Is the book a satire (roast) of self-help books?

It started out as a roast, but once I dove in, I realized it was a vast subject that needed addressing.

That’s the satire of self-help books that promise the moon and tell you it will be easy. It never is…

In the chapter “The Pseudo Science of Suffering” I look at suffering from a very analytical mindset. There are cycles that repeat and charts and graphs depicting the non-linear relationship between pain and suffering. At the end of the chapter I note that any science, even pseudo ones, need a metric to work with. The Sufferometer obtains that metric. There are instructions in the book on how to make and use this device.

Of course, I was having fun with the idea at first, but soon realized it was actually a valuable tool in externalizing one’s suffering state so that it could be acknowledged and dealt with.

Why do you call suffering “The Gorilla in the Room”?

Because so much of what we all do is motivated by suffering and the avoidance of it. Get rich so you won’t suffer lack. Find love so you won’t suffer loneliness. Furthermore, people rarely address the issue directly. When asked “How are you?” it is rarer than rare to hear someone reply, “I am suffering.” But that is the root internal experience behind pain, loss, frustration… Suffering drives so much of everything, and yet it’s ignored, just like a big gorilla in the room.

Is there anything beyond the 10 easy steps?

I have fun with those 10 easy steps. But after that there are the 6 slippery steps to end suffering. These steps are slippery because they take balance and wisdom to use effectively. As an example: Non-attachment. Being attached can certainly bring on suffering, but there are people who are SO un-attached that they don’t care about anyone, or anything. So, it’s a balance.

What is the most profound concept in the book?

For my money, the best answer trickling down from the Godhead is from India and the ancient Vedic teachings known as the Vedanta. In that teaching the causes of all suffering are listed in the Five Kleshas:

And now the kicker! Causes 2, 3, 4 and 5 are all contained in the First Klesha: all suffering is caused by not understanding the nature of Reality!

Is there an end to Suffering?

According to Buddha – yes, it is possible. He did it! But for most of us it comes and goes. However, whatever you may be suffering about now can end – that’s for sure…

The book has a humorous and satirical tone to it. Why is that?

Well, who wants to suffer through reading a book of suffering!? By using humor, it allows one to approach the subject without pain and dread. Aside from that, a lot of humor arises from ironic views of suffering past, present and future.

How has writing this book changed your life?

By bringing awareness into my life about suffering, it has diminished, and when it does land, it doesn’t camp out for nearly as long!

“S”uffering. And like the “F” word, it is a word not used in polite company.

Why do people generally avoid talking about Suffering directly?

They don’t want to admit it to themselves or others. They want to appear all together, in control, at the top of their game (a.k.a. Ego).

In your chapter, The Pseudo-Science of Suffering, you talk about the “Threshold of Suffering.” What is that?

There is a graph depicting the relationship between pain and suffering. They are not one and the same, but related. The threshold of suffering is the point at which, as pain increases, one tumbles into suffering. The important point for us is – that threshold is under our own control!

And Why call it pseudo-science?

It’s more of the ironic sense of humor about trying to put charts and graphs on the internal state of Suffering.

You coin the word TechnoSuffering. Is it really a new category of suffering?

Oh yes, it is. All these device that are created to make our lives better actually cause our slavery to those devices. And when they don’t work, don’t update, don’t boot, don’t connect, don’t, don’t, don’t… it is frustrating beyond tolerance.

Did you experience any serendipity or synchronicity while you wrote the book or as a result of the book? If so, what?

Nothing in particular. But since writing the book, Deirdre, my wife, tells me I’ve been in a better mood. I’ll take that!

William Arntz is a physicist, software entrepreneur, filmmaker and author. He wrote simulators for the early Star Wars program,  created software that the Fortune 500 world runs on, created the What the BLEEP Do We Know!? movie and books and co-created the book of visionary prophesies –The (not so) Little Book of Surprises – with Deirdre Hade. His newest book is How to Suffer…. In 10 Easy Steps. www.HowToSuffer.me