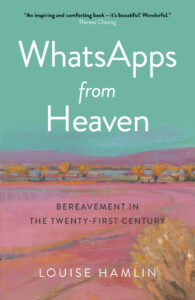 It was shortly after the holiday of a lifetime – a safari to Zambia – that my husband, Patrick, started to feel off-colour.  Three months later, he was dead.  Bile-duct cancer. The shock and horror left me reeling.  We had been so very happy in our marriage, and we had expected many more years together – Patrick was only 71 and until that wretched cancer he had always been incredibly fit and healthy with the physique of a much younger man.

I was totally devastated and incapacitated by my bereavement.  I couldn’t eat, I couldn’t sleep, I couldn’t function.  If it had not been for friends and family, I would just have faded away.  As it was, I lost all sense of my own identity.  I felt like an amorphous, liquid blob without boundaries.  Inside, there was such a deep reservoir of grief that I felt I was drowning.

I sat for hours by the summerhouse at the top of the garden, where there was a wide-ranging view of fields and woodland.  I meditated and discovered that that helped still the constant churning of the lake inside me.  I also learnt that the way to get through was to divide time into tiny chunks, and just live in the moment.  I would say to myself that I just had to get through the next hour, or until the next mealtime.  I could not think about the future – that was too horrendous to contemplate – and I could not let myself think about the past, because it was too devastating to see what I had lost.

It was while I was in this desperate state that I went to mediums and also signs started to appear.  I did not really believe in an afterlife, but I was really worried about Patrick and needed the reassurance that he was all right. I wanted some sort of contact with him. So, I approached mediums, and was astonished by some (not all) of them.  Some said things that convinced me that they were indeed in touch with Patrick’s spirit.  I rang one medium and asked to see her.  I just said that my name was Louise – no surname – and my husband had died in February. That was all I told her.   She said, over the phone, “yes, he died on the 16th.”  I denied that, explaining that he had died on the 18th, though he had lost consciousness on the 16th. “Well,”, she said, “he’s telling me that he died on the 16th.”  And of course, he was right insofar as he was dead to us on that day.  I went to see her, and she said many more things which were indeed absolutely spot on.  For example, she said that he was showing her cornflowers.  Not any old flowers, but specifically cornflowers.  When we had got married, nine years earlier, Patrick had worn a cornflowers is his buttonhole, as had the ushers.  It was a significant flower for us.

As all this was happening, I was also getting signs, apparently from Patrick.  But I was sceptical and nothing convinced me until the morning of 6th August when I was walking on Tooting Common with the phone in my pocket.  When I got back to my son’s house, I discovered that I had apparently created two WhatsApp groups, one called Hamlin Family, consisting of Patrick and me, and one called “Hamlins”, consisting of Patrick’s daughter, Patrick and me.  But I hadn’t.  The phone had been in my pocket at 11.06 am when these groups were created.  I didn’t even know how to create a WhatsApp group back then.  There was no way I could have done it accidentally, subconsciously or in any other way.  And there was no way that anyone else could have created the groups on my phone.  It was paranormal. I realised that it was Patrick, who had been sending me strange WhatsApp messages before, who was saying, “look, I am around, I exist.”  The 6th August was his daughter’s birthday, and I felt that he had included her to give her a birthday present – a present of his presence.

It was a moment of revelation for me.  It was then that I started to accept all the signs that the poor hard-working man had been sending.  It was then I knew for sure that spirit survives death.  It was mind-blowing.  It was wonderful.  It was deeply consoling.

In my book I describe many other signs that I received.  I kept a journal and wrote everything down, and the book was very precious because it detailed my interactions with the man I loved.  I had lights going on and off, books flying from bookshelves, feathers in impossible places, and the WhatsApps, more and more WhatsApps and WhatsApp groups.

I think the most extraordinary sign that I received was when I was playing bridge and a playing card disappeared in the middle of our game. We had played with it and then it suddenly wasn’t there.  We searched and searched – it was nowhere to be found.   It was the Nine of Hearts.  That particular card didn’t mean much to me then, but a friend who knows about tarot said that in the tarot pack, the equivalent, the nine of Cups, is the card that represents deep and unconditional love.  As an addendum, over a year later we found the card underneath an ottoman – an ottoman that had been pulled out and hoovered under several times in the intervening year.  There was no way the card could have got there by normal means, nor had it been there for a year.

I wrote my book because I wanted to chronicle my experience of bereavement.  So many books tell you about bereavement but are written by people from the outside looking in – I wanted to tell my personal story.  I also wanted to tell the world about the extraordinary signs that I had received.  I put my head above the parapet, and I realise that some people will discount what I have written, but as a former lawyer and academic, I wanted to show the world the evidence that I have received.  I hope my book also validates the experience of many bereaved people because I have discovered that many, many people have received signs from their loved ones, but are reluctant to talk about them because they fear that they will be ridiculed.

WhatsApps from Heaven is an account of a bereavement and the extraordinary signs – including WhatsApps – that a retired law lecturer then received from her deceased husband.

WhatsApps from Heaven is available from www.0-books.com and from where books are sold.