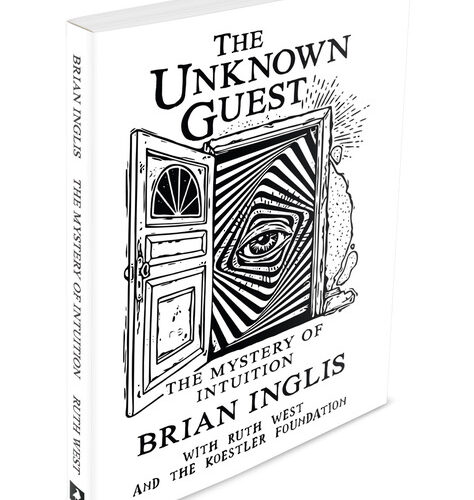 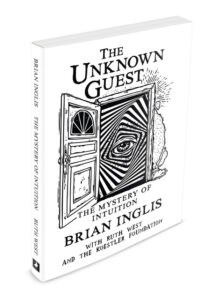 An excerpt from The Unknown Guest: The Mystery of Intuition

By the nineteenth century educated people in general were beginning to feel that they ought to dismiss the entire range of spirits as a superstition. Ghosts, fairies and the rest of the denizens of folklore inevitably had to go, too. The belief in ‘powers that be’ lingered; many a sceptic who professed to disbelieve in ghosts would not have cared to accept an invitation to sleep in a supposedly haunted room – just as many people who would have denied that they were superstitious continued to touch wood after a boast (and were uneasy if they could find no wood to hand for the purpose). But angels were relegated to heaven, there to play harps and sing hymns; demons to hell, to prod the damned with pitchforks. Although ‘guardian angel’ lingered on, it was most commonly used much as ‘Thank the Lord’ is used, without any religious connotation. The concept of daemon, in its Socratic usage, faded out: Goethe accepted it, in his rear guard action against advancing materialism, but by his time it was beginning to qualify for ‘Obs.’ in dictionaries. In our century some dictionaries had ‘Daemon, see Demon’; others left it out. Few people, except those whose classical education had taken them up to the point of construing Plato, would have come across it.

The underlying concept of a guiding and protecting force, however, did not entirely disappear. Usually it has been attributed to divine intervention; but a few agnostics have preferred to leave the issue of its source open, contenting themselves with expressing the belief that such a force has played a positive part in their lives.

The description of somebody as ‘bearing a charmed life’ has long lost its impact, but it certainly applied to Churchill. He knew it, and he attributed it to a protector. ‘I sometimes have a feeling – in fact I have it very strongly – a feeling of interference, ’ he told a gathering of miners in 1943. ‘I want to stress it. I have a feeling that some guiding hand has interfered. ’

In his youth he attributed the interventions to ‘that Higher Power which interferes in the sequence of causes and effects more often than we are always prone to admit’; and in My Early Life he cited as an example the way in which he managed to escape from captivity during the Boer War. Foiled in his intention of clambering onto a goods train going in the direction of Mozambique, he wondered whether it would be safe to go to a place where he saw fires burning at a distance, which he took to be a Kaffir kraal. The Kaffirs, he had heard, loathed the Boers and might be friendly. But what if they were hostile? He sat down, baffled.

Suddenly without the slightest reason all my doubts disappeared. It was certainly by no process of logic that they were dispelled. It just felt quite clear that I would go to the Kaffir kraal. I had sometimes in former years held a ‘Planchette’ pencil and written while others had touched my wrist or hand. I acted in exactly the same unconscious or subconscious manner now.

When he reached the fires he found that they were from the furnaces around a coal mine. There was nothing for it but to take a chance. Some British subjects, he had heard, had been allowed to stay to keep the mines working. He knocked at the door of a house, explaining his dishevelled appearance by saying he had had an accident, and he was let in. His host, who held a revolver, listened sceptically to his tale, so obviously unimpressed that Churchill felt compelled to reveal the truth.

My companion rose from the table slowly and locked the door. After this act, which struck me as unpromising, and was certainly ambiguous, he advanced upon me and suddenly held out his hand.

‘Thank God you have come here! It is the only house for twenty miles where you would not have been handed over. But we are all British here, and we will see you through.’

His host hid Churchill down the mine until he could be concealed in a railway wagon destined for Lourenço Marques, where he regained his freedom.

In My Darling Clementine, the biography of Lady Churchill published in 1963, the story is related of an occasion during the Blitz when Churchill refused to go in the armoured car provided for him, because it was so uncomfortable, and instead commandeered a staff car. As he was about to get in, a strange thing occurred. The nearside door of the car was opened for him – he always sat on the nearside. For no apparent reason, he stopped, turned, opened the door on the other side of the car himself, got in, and sat there instead.

This was something he had never done before. On his way home, a bomb fell near the car, lifting it up on two wheels.

If he had been sitting on the nearside, the car would have unquestionably turned over as the full force of the explosion lifted up the offside. Only Winston’s extra weight had prevented disaster.

Although he didn’t mention this escape to Clementine, she heard about it and asked, Why did you get in on that side?

‘I don’t know, I don’t know,’ Winston answered at first. Then he said: ‘Of course I know. Something said to me “Stop!” before I reached the car door held open for me. It then appeared to me that I was told I was meant to open the door on the other side and get in and sit there. ’