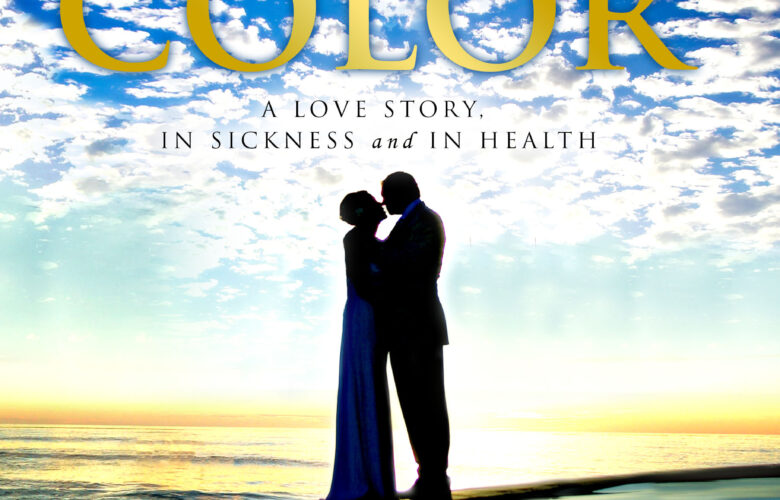 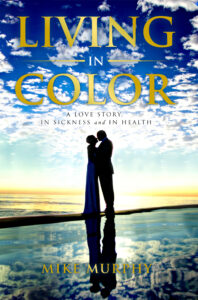 The following is an excerpt from Mike Murphy author LIVING IN COLOR: A Love Story, in Sickness and in Health. Publisher is Ocean M Press; Copyright 2021 by Mike Murphy

The doctor is looking at us like he’s waiting for a response. Does he think he’s offering us a choice? I turn to look at my wife, Margot, who is sitting beside me. Her face is shadowed by the excruciating pain she’s been enduring for the past few weeks, but her expression is calm. The only sign of tension is a slight indentation between her brows—those perfect arcs that she has been drawing on with a pencil every morning for almost a decade. Her glossy dark hair has fallen out and grown back more times than I can count, but her eyebrows were sacrificed forever to her first bout with chemotherapy, nine years ago when she was just twenty-nine. Beneath the penciled curves, her beautiful brown eyes are clear—soft with acceptance, but strong. I know, without asking, that she’s ready to fight. Again.

Her oncologist has just confirmed what we pretty much already knew—Margot’s cancer, which she’s been battling for most of the time I’ve known her, is back. And this time it is in her brain. The technical term for her condition is Leptomeningeal Carcinomatosis. The nontechnical translation, which our other doctor gave me on the telephone a few days ago, is that it’s about the worst possible thing that could happen for her.

I spent much of last night on the Internet reading up on exactly what that means. Margot’s cancer began as breast cancer, but over the years it spread to other parts of her body. Now, it has broken through the meninges—the membrane protecting her brain—and is in the brain’s lining as well as her cerebral spinal fluid. It’s a pretty rare condition, occurring in only a small percentage of cancer sufferers, simply because most patients with active cancer don’t survive long enough for the cancer cells to break through the meninges. Margot has beaten the odds by living so long, but her cancer has beaten them too.

Now the doctor has spelled out her prognosis. “There’s no easy way to say this. If you do nothing, you have about six weeks to live. If you choose to treat it, which will involve full-brain radiation therapy and chemotherapy injected into your spine, you could have six months at best.” Six weeks or six months to live. That means only one more Christmas.
Her next birthday will be her last. She’ll never see another summer.

I can’t let me myself keep thinking like this. Bracing myself, I ask the doctor, “Okay, so what do we do?”

“Wait a minute.” Margot has been quiet, but now she interrupts me, sitting up and leaning toward the doctor. “I need to know, is there any hope? Can I beat this?”

He meets her gaze, but his eyes say it all. Slowly, he shakes his head. “You would need a miracle,” he says.

On the doctor’s desk is a large, brown envelope that I’ve been carrying around for a few days, and next to it, spread out on the desk, the envelope’s contents: Margot’s brain scans, along with the doctor’s report. While I don’t understand the language of these things with the fluency that the doctor does, I’ve seen enough of these images and reports to be pretty sure from the moment I opened the envelope, that the news wasn’t good. Margot knew it too. She went in for the scans a week ago, on Monday, and I returned to collect them Wednesday, the night before Thanksgiving.

By some strange irony, I had gone through this exact sequence of events three years earlier, right before Thanksgiving in 2007. I found myself at the same hospital reception desk, arguing with the same receptionist. She was telling me, just as she had before, that she couldn’t release the scans without a doctor’s permission, and all the doctors had gone home for the holiday. And just as I had before, I somehow convinced her to hand them over, knowing that we couldn’t possibly sit and wait until the following week to get the results.

I arrived home with the envelope, but Margot didn’t want to ruin our family’s holiday celebrations with the bad news we were pretty sure was inside. “Waiting a few days isn’t going to change anything,” she told me. “Let’s not spoil this Thanksgiving.” I didn’t have nearly as much self-control as she did and couldn’t put it off. I went into the study, closed the door, and opened the envelope. The doctor’s report began:

Each paragraph seemed to begin with that word: Unfortunately.

FINDINGS: Unfortunately compatible with metastatic disease of the brain with suspected leptomeningeal carcinomatosis as well as several discrete lesions, at least three noted in the cerebellum…

“Unfortunately.” What a hopelessly inadequate word for a moment like this. Flipping through page after page, I felt numb, unable to process what I knew was happening. All I could think was, how the hell am I supposed to keep this from Margot for a whole weekend? How am I going to keep it from her for the next five minutes?

We were spending the holiday at our second home in Palm Desert in Southern California. My youngest daughter Kelli and my son Mike Jr. had come down from Northern California, where we live for most of the year, and Margot’s parents were joining us, as well as her sister’s family. We were supposed to be having a big, barbeque takeout dinner that night. My hands were shaking as I stuffed the films and reports back into the envelope. I needed to get out of the house, and I needed to talk to a doctor. Thank goodness I’d volunteered to collect the food.