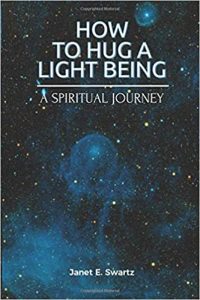 1. What is How to Hug A Light Being: A Spiritual Journey about and why did you write it?

The book is a story from my perspective about my son’s life and suicide, what it was like raising him, what he wrote about in school that we found after he left, what kind of Mom I was during his life-time, his experiences growing up, his friends’ experiences of him, and what was said by those he mentored on-line and in person as a spiritual mentor.

The most revealing information that I learned is that Daniel never had to be on the planet in the first place, that I needed to accept his choice to leave, and that my biggest fear became my greatest blessing.

I wrote the book several years after he left, so it was not meant to be a therapeutic piece, but one that would honor him and perhaps help others heal from their losses though they may be different.

2. What advice would you give to a parent whose child died by suicide?

That is such a personal question and depends so much on the circumstances.

In general, we have to accept the reality as human beings on the planet that we carry an emotional body which is connected to our mental, physical and spiritual bodies.   We are challenged to lovingly forgive ourselves and our child.

Anything that we need to help us rebalance and move forward is important to garner.  I rely on the Empowerment Process® to heal, change my old behaviors that have been prompted by this suicide and other situations in my life, as well as those disempowering energies that I am holding on to from childhood and from my ancestral DNA.

3. What helped you get through the loss of your son?

My situation has changed quite a bit now with my daughter’s transition last June, also an amazing Being, from a painful sarcoma.  It has been 11 years since Daniel left.

For the first few months after Dan’s suicide, I had friends who offered to help, answering my front door and phone while I stayed in my room.  There were so many flower deliveries and visits from those who had the courage to come.

I also took homeopathic remedies for the grief that a professional made for me.  I let myself be angry (in my room), talk to Dan, and also feel the love that I was feeling.  I had guidance from psychic friends as well.

One thing that helped me after a time was my need and ability to support others with their disbelief, grief, and sorrow for themselves and me. I would talk to them (this went on for a year and a half until I decided that I was no longer responsible!) and let them know I was moving forward.  It really helped them know I could talk about it and also be OK with such a reality.

Pretty much what I mentioned above.  Once I felt ready to go into public, I also started my work again.  There is a lot of detail in my book, How to Hug A Light Being, A Spiritual Journey that talks more about all this.

5. Some parents might feel guilty or question whether they should have done anything more to prevent the death of their child who died by suicide. What would you say to them?

As parents, we always do the best we can.  I personally felt the need to forgive myself.  We can always suggest alternatives to our kids if we think there is something wrong, but we also have to leave it up to them and to the Divine for the control of such decisions.  Dan didn’t want any part of medication, therapies other than his and my emotional transformational processes, and when he went to the law school therapist, she said she was learning a lot from him.  Hmmm.

Whatever is inside us to transform, the opportunity comes.  Sometimes life is difficult, but somehow, we must have chosen it at some point before we arrived here.  At least that is my belief.