1. What is The Truth of Yoga about and why did you write it?

It’s an accessible guide to yoga’s history, texts, philosophy, and practices – basically, how it evolved into what it is now. There are 100 blog-length chapters on all the different elements that shaped its development over the centuries. I wrote it to answer the questions I had as a practitioner. Of course, there are other books out there, but none quite like this one. Most of them are either academic (which often means informative but difficult to read), or popular translations that rewrite philosophy to sound more appealing. I’ve tried to offer something different, combining scholarly knowledge, traditional insights, and clear explanations. I guess that’s a product of my own life experience – I used to work as a journalist, I’ve studied yoga academically, and I now teach courses at the Oxford Centre for Hindu Studies and on yoga teacher trainings.

2. How is the historical practice of yoga different than how it is currently practiced?

Yoga today is often thought to mean postures – making shapes on a mat. The Sanskrit word for these is asana, which really means sitting. Until 1,000 years ago, the only postures that were mentioned in texts were ways to sit. The aim was to focus within, by restraining the mind and withdrawing the senses. Two methods were said to achieve this – concentration on an object and control of the breath. Other practitioners stayed in awkward positions for a very long time, standing on one leg or holding an arm above the head. This ascetic approach had a different name. Known as tapas, which translates as “heat,” it was more extreme, but had similar aims. Physical effort was used to detach from the body and the mind, which led to indifference to pleasure or pain. Priorities shifted due to the influence of tantric philosophy, which saw the body as a means to liberation instead of an obstacle. Newer texts taught a method called hatha, in which non-seated postures had physical benefits. These were used to prepare for subtler techniques, which still involved sitting. By the 18th century, there were more than 100 postures taught in texts. However, classes as we know them today – teaching sequences to groups – may have only begun in the 20th century. To simplify history, practice keeps changing, becoming combined with a range of philosophies. The original objective was freedom from suffering, whereas today it might just be relieving stress, or trying to look good in swimwear – though that’s pretty much the opposite of ancient ideas about detachment.

3. Do you consider yoga a spiritual practice? If so, how is it spiritual and how can we deepen our practice to incorporate spirituality into it?

It can be, and that’s how it’s taught in traditional sources. The ultimate goal is a spiritual state beyond the mind. To cite the earliest Upanishads, which predate the Buddha, we’re not the body, or the senses, or the mind. Instead, we’re consciousness seeing the world in subjective ways. To resolve our confusion, we’re told to inquire who we actually are. Early texts share two techniques, which can sound a bit abstract. The first is to list all the things that we’re not. When we run out of language, the mind is transcended. The other is to get more familiar with a witnessing presence behind all experience. The only instruction is framed as a riddle: “By what means can one can perceive the perceiver?” asks the sage Yajnavalkya. “That’s all there is to immortality.” Or in other words, there’s nothing but now, so what counts is where we focus attention. If we notice the gaps between thoughts, we can let these expand. A broader perspective reduces unhappiness. A lot of mental anguish is based on ideas about who we are, and the things that we want, and whether we get them or not. If these stories we tell ourselves stop, even just for a moment, it weakens their grip. None of this is actually linked to the practice of postures, but they can still be approached with a similar mindset of detachment. However, using the body has pitfalls. It’s easy to get fixated on what it can do, so physical practice can strengthen the ego, instead of helping us see through its illusions.

4. There are so many different types of yoga out there. Do you recommend any types and resources for it?

There are certainly many approaches. I think some are less helpful than others, but it depends on priorities. One recent example is “beer yoga.” I don’t find that alcohol helps me to focus, which is one of the traditional goals of practice. But if the aim is just light-hearted fun, then perhaps that’s different. In terms of postural classes, I’d suggest choosing teachers with lots of experience, who care more about students than social media. The method I began with was Iyengar, which I found very helpful in some ways and rigid in others. I feel the same about Ashtanga, which I explored after that. Both of these provided foundations for other modern systems – detailed instructions for getting the body into postures and moving between them with focused awareness. New approaches are always emerging, so it might be worth trying whatever appeals to see how it feels. I’m not the best person for recommendations – I mostly practice at home and rarely go to a class. However, yoga involves more than postures, so I’d recommend starting by reading some texts to get a different perspective. Traditional ideas can be hard to interpret at first, which is why I wrote my book. It offers an overview of influential teachings and quotes them directly. To put them into practice, it helps to get guidance from someone who embodies what they say, though we need to remember that teachers are human and therefore have flaws. My rule of thumb is to run the other way if someone says they’re a guru, even though yoga was traditionally shared within guru-led lineages. If that path sounds tempting, I’d suggest being careful and reading up about abuses before diving in.

5. In general, what is some advice you have for people who practice yoga and would like to deepen their practice?

To keep asking questions, especially “who am I?” and “what is this for?” If a teacher doesn’t like being questioned, I’d try someone else. Having said that, too many questions can also be way of avoiding practice…

6. What is the relationship between yoga and meditation and how can we combine the two practices?

Traditionally, they’re the same thing. Some early descriptions call the practice dhyana yoga (i.e. meditative yoga) and the best-known text about yoga philosophy – the Yoga Sutra of Patanjali – is a meditation manual. Of course, many people find it easier to move on a mat for 90 minutes than to sit by themselves. And postural yoga has meditative aspects. If one is fully absorbed in a physical practice, it can develop one-pointed focus. But it’s hard to go much deeper without being still. That’s why the earliest texts teach seated postures – it’s tricky to meditate while losing your balance or gasping for breath in a challenging backbend. 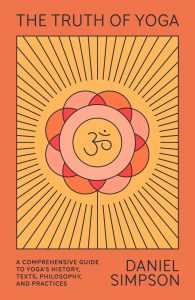 7. What are some common challenges you have encountered in your yoga and meditation practice or seen other people encounter and how can we overcome those.

We all experience ups and downs, thinking we’re getting somewhere or going backwards. As long as I trust what I’m doing, and feel clear why I’m doing it, then I try to continue without getting worried about the results. But if practices start causing harm, then something needs changing. Disciplined effort can easily morph into self-flagellation, and that leads to more pain. It’s important to be honest with ourselves. Finding like-minded people to talk to can also be helpful. Originally, yoga involved renouncing worldly life. Thankfully, this isn’t a requirement today, so it’s nice to feel part of a supportive community.

Did I mention my book? 🙂 You can find out more at http://truthofyoga.com – I also offer courses that cover the contents in more detail, as well as facilitating online discussions. If anyone has questions, they can contact me here: http://danielsimpson.info/contact