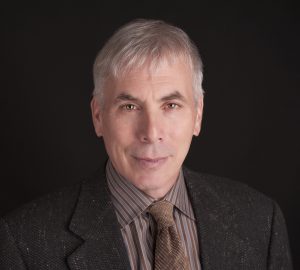 Michael J. Gelb has pioneered the fields of creative thinking, accelerated learning, and innovative leadership. He leads seminars for organizations such as DuPont, Merck, Microsoft, Nike, Raytheon, and the University of Virginia’s Darden School of Business. He is the coauthor of Brain Power and author of The Art of Connection and the international bestseller How to Think Like Leonardo da Vinci. His website is www.MichaelGelb.com.

How will improving my presentation skills affect other aspects of my life?

Mastering the art of public speaking will help you grow as a human being. You learn to place your ego on the shelf as you actively seek feedback on your performance and as you transform your fears, insecurities, and limiting habits.

You will gain valuable insights into your own nature and into that of others. These insights will help you develop your skills in leadership and personal relationships and will enhance your of self-confidence, poise, and sense of personal power.

You write that many great presenters have learned to overcome the fear of public speaking.  Can you give some examples?

One study found that more than 80 percent of elite professional actors experienced stage fright at some point in their careers.

Among those who have reported experiencing intense nervousness  and “butterflies in the stomach” before performing are luminaries such as Adele, Rowan Atkinson, Samuel L. Jackson, Harrison Ford, James Stewart, Megan Fox, Cher, John Lennon, Amanda Seyfried, Fiona Apple, Barbra Streisand, and Sir Laurence Olivier. In other words, if you have grappled with stage fright, you are good company!

The essential question that we will explore together is: How do I get the butterflies to fly in formation? Every word in this book is designed to help you transform fear and anxiety into confidence and enthusiasm.

You are known primarily for your work in the realm of creativity through your bestseller How to Think Like Leonardo da Vinci.  How’s does creativity relate to public speaking?

Creativity is the key to making presentations engaging, both for oneself and for the audience.

You write that The Alexander Technique is the most helpful method for developing public speaking skill?  What is it?

Despite a sometimes grueling speaking schedule, I have never lost my voice. I apply a method that gives me access to the natural, expressive, and authentic use of my voice and body language. This same method is also an effective means for developing self-knowledge, changing habits, and transforming fear. It is called the Alexander Technique, named after its founder, F. M. Alexander. Alexander Technique teachers use their hands in an exquisitely subtle manner to give their students an experience of ease of movement and freedom from the unconscious and unnecessary tension that interferes with breathing, vocal usage, and stage presence. Frank Jones, former director of the Tufts University Institute for Psychological Research, describes the technique as “a means for changing stereotyped response patterns by the inhibition of certain postural sets” and as “a method for expanding consciousness to take in inhibition as well as excitation (i.e., ‘not doing’ as well as ‘doing’) and thus obtaining a better integration of the reflex and voluntary elements in a response pattern.”

My favorite description of the technique was offered by

Gertrude Stein’s brother Leo, who called it “the method for keeping your eye on the ball applied to life.”

When I began my speaking career, I was usually the youngest person in the room. The Alexander Technique gave me a sense of poise and presence that allowed me to hold my ground in in- teractions with people senior to me. Now I’m often the oldest person in the room, but I usually have the most energy and the best posture, thanks to this technique.

Is humor important in public speaking? 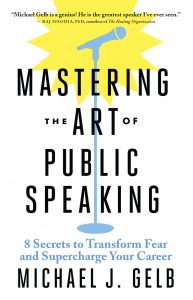 Never use humor. Just kidding! Laughter generates endorphins and defuses stress, helping you and your audience to relax. Cultivate appropriate lightheartedness, and avoid taking yourself too seriously. If you want to tell a joke, practice it and work on the timing, and be sure that it relates to what you want people to remember. (continued)

What has changed in the world of public speaking since you began your career?

Attention spans are shorter, dress codes are more casual, audiences are more global and diverse, and overhead projectors are obsolete. And we are at the dawn of the age of virtual presentation. In a 2010 episode of the television show The Big Bang Theory, Sheldon Cooper appears via a Mobile Virtual Presence Device (MVPD), a robot he invented to protect him from life’s dangers. Decorated with one of his shirts, the MVPD, a.k.a. the Shelbot, uses a webcam, loudspeakers, a flat-panel display, and a moveable platform to allow the germophobic Sheldon to interact with his friends at a sterile distance. I remember thinking when I saw that episode that it wouldn’t be too long before a similar phenomenon might arise at conferences. In 2018 I gave a keynote at the Exponential Medicine conference sponsored by Singularity University, and one of the other speakers onstage in front of an audience of eight hundred was the virtual presence of futurist and author of The Age of Spiritual Machines, Ray Kurzweil.

What are some of the specific challenges of speaking via a virtual modality?

In recent years, I’ve led many seminars via virtual, online platforms and have given more keynotes this way as well. The biggest challenge is that it is harder to read the audience since, in larger events, most of them aren’t visible on the screen and most are muted so it’s not always easy to know if everyone is laughing at the jokes, nodding in agreement, dozing off, or checking their email. The other challenges are technical. It takes some practice to develop skill in using visuals appropriately and to move people in and out of breakout sessions. I can say, with full confidence, that everything we have covered in this book becomes even more important when you are presenting virtually.

What is molecule fondling?

Many people, though very knowledgeable, aren’t wise when it comes to communicating their message.

A number of years ago I had the opportunity to provide regular seminars on creativity and innovation for engineers and scientists from the DuPont Company. Among the many bright people in my classes, some of the most outstanding were those from the DuPont Fellows Program. (From the company website: “DuPont Fellows are scientists and engineers who define new technologies, influence research direction, and mentor other scientists both inside and outside of the company.”)

The head of the fellows program invited me to work with these brilliant scientists to help them in their presentations to the marketing and sales department. When I met with them and asked them to share their latest presentations (we recorded these on video), each scientist stood up and talked about some aspect of the molecular structure of the chemicals they were researching. It went something like this: “So we looked at the molecule under this set of conditions (continued)

Of course, the marketing and salespeople weren’t particularly interested in the details of the specific behavior of the molecules in question. They wanted to know: What specifically will this chemical do? When will it be ready? How safe is it? And what compelling name could we give it? (After all, these are the same folks who came up with great names like Teflon and Corian.)

When the scientists watched the video, after being coached to review it from the perspective of the marketing and sales team, they all seemed to recognize that they needed to be much more audience focused. The chief scientist captured the essence of their revelation when he rose and exclaimed, “Oh, my God. We are guilty of molecule fondling!”

Almost everyone, from every profession, tends to be guilty of molecule fondling. The greater your expertise, the greater the danger that you will focus on the details of what you know rather than on what your audience might need.

Mastering the Art of Public Speaking:

8 Secrets to Overcome Fear and Supercharge Your Career