Stripped of everything he held dear – executive position, money, status and most importantly family – Don Mordasini realized life was over as he knew it … as a stockbroker. As vice president of Dean Witter and Co. he learned the brutal truth of the old adage, “There is no free lunch on Wall Street.” Don had earned success the hard way – long hours and hard work. He knew the challenges of holding a demanding job, while parenting and partnering during good and bad times. The reward for his efforts was over. The “good” life had been cut short.

As a successful stockbroker Don hit the wall, so at mid life he began a psycho-spiritual quest that led to becoming a psychotherapist. He trekked the Himalayas, studied ancient scriptures and spent hours in spiritual practices under the guidance of his teacher in India…

I recently had a chance to interview Don about his journey and new book, Princes & Ogres: Integration of Psyche and Soul. You can read a portion of the transcript of our conversation which is copied below….

Matthew Welsh (MW): How did you come up with the title of your book, Princes and Ogres?

Don Mordasini (DM): I took the title from a Joseph Campbell myth “Prince Five Weapons.” A young prince (very pride-full) enters a deep forest and encounters an enormous beastly ogre. He is nearly vanquished in battle using weapons of his ego. As he faces death he calls upon deep wisdom and masters the ogre which then becomes his aide in guiding others through the forest.

MW: Your writing is very reader friendly since you intersperse personal examples with ancient stories. Is this why you decided to share your wisdom through ancient heroes and heroines?

DM: …the book is reader friendly because I use case histories of those I work with as well as stories about myself that make the book more than a catalogue of interesting wisdom stories. I like to show that we are heroes when we stand into the face of job loss, relationship breakdown and the trials that come our way. Most of the stories are from ancient sources to show that man has been in heroic battle against the projection of the ego since ancient times.

MW: Can you give me a sample of a brief wisdom story, the imbedded psychological theme and how someone actually applied it to their lives so listeners can get an idea of your book and its practical application.

DM: Yes, “The Snake That Wouldn’t Hiss” will give you an example of how we can benefit from wisdom stories and show how practical they are today.

One day a holy man wandered into a village. Following a brief rest and light meal a group of villagers sat around him eager to hear his wise stories and receive his blessings. The next day as he was ready to depart, the villagers advised him not to leave by a certain road because there was a vicious snake on that road that would bite him.  Ignoring their pleas he followed the dangerous path out of the village. Before long a hugh snake appeared and asked the holy man for some spiritual advice. Feeling sorry for the snake he gave his blessing and a bit of sound spiritual wisdom then continued on his way.

Sometime later following the saint’s advice the snake allowed the bravest of the children to touch and play gently with it. Children being children – became emboldened and starting playing rough with the gentle snake. The snake put up with this behavior because it wanted to be ‘holy’. Eventually the children began to abuse the snake hurling it around and stomping on it. Eventually the snake was left by the roadside for dead.

Many years passed and the holy man returned to the village. As he approached he heard a faint voice crying out for help. He failed to recognize the snake in its battered condition. He asked the snake what happened and the snake recounted the years of punishment it endured because it was advised not to bite anyone less it might jeopardize the welfare of its soul. It told the wise man it just wanted to be a simple spiritual snake.

The holy man was puzzled by the snake’s answer and shook his head. Then he replied, “You didn’t have to bite and hurt the children but you certainly could have hissed”.

The psychological message I write in Princes and Ogres is that we must develop boundaries to protect ourselves because we live in a material world and we must take responsibility for our own protection. We cannot pray and ask God to take care of the things we have resources to take care of our selves.

In Princes and Ogres… I point out that our ego protects us in many ways and we are required to draw boundaries, set limits, speak up and assert to get our needs met so life doesn’t walk over us. 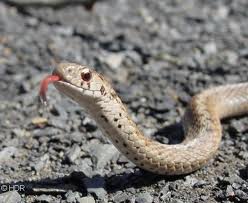 I then tell the story of Naomi, a gifted psychic who failed to ask for payment for her services and often took calls late at night when she was exhausted to please her clients. She thought that being ‘spiritual’ people would understand her needs. She was dead wrong. After several meetings it was clear she was afraid to assert. Like our saintly snake, I told her that she needed to take care of herself. This simply meant setting limits with her clients that infringed on her privacy and asking for payment at the time of her readings. I stayed in touch with Naomi and occasionally would ask her, “Did you hiss.” She laughed and said that she put up a sign asking for payment at the end of each visit and set a work schedule she abided to.

MW: You abandoned your career as a stockbroker to pursue a life with more meaning. Have you been successful?

DM: There are two measures of success – material and spiritual. At the material level I have been supported and guided by mentors and received the grace to help others as a therapist and that has made my work materially rewarding.

At the spiritual level I have been rewarded beyond my dreams because my earlier belief in the sacred has been a most profound experience of the inner sanctum. In other words God or what we might call God has been a Consciousness that is as real for me as talking with you now.

MW: Knowing the challenges of holding a demanding job, while parenting and partnering during good and bad times, what do you feel is the best way to deal with today’s crippling economy?

DM: I have learned through my experience and the experience of others that every challenge has the seeds of personal growth and spiritual awakening. I actually believe trials are opportunities to accelerate or actually supercharge our individual growth. Moreover challenges are an invitation to go within and find the source and purpose of our existence.

MW: If there was just one message you could impart to readers what would it be?

DM: Don’t get stuck in ogre mind that knows nothing of other states of consciousness. Go deep within. The peace you sometimes feel – the love you experience – the compassion and connection to others you sometimes feel are finite experiences that emanate from a source of infinite peace – love – brotherhood and light that form the substratum of your being. The finite cannot create the infinite. The infinite creates the finite. You are one hundred percent a material being and one hundred percent a spiritual being.