For many travellers and book lovers, Las Vegas is a nightmare rather than a dream location, mainly due to its tacky façade, flagrant waste of electricity and consumerism so condensed it’s difficult to stomach. However, for those who look beyond the glaring lights of the strip and the screeching of street hawkers and promo pushers, there’s a genuine spiritual journey to be had in the heart of the Las Vegas desert, a place full of so many contradictions that it beguiles as much as it repulses. Hunter S. Thompson knew this all too well, creating Raoul Duke, who ventured to Sin City to decode what the American dream even meant anymore and whether room service would really bring you anything you want. 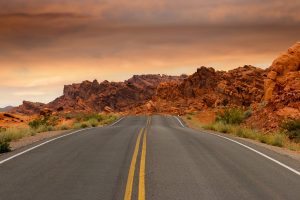 When it was first published in 1971, Fear and Loathing in Las Vegas was revered as a feast for the senses, but with a loosely connected plot. Mainly set in the strip’s casinos and resort hotels, it also highlighted the beautiful naivete and tainted glamour of this alluring Nevada metropolis. Despite all its shortcomings, it remains a dream destination for poker players who would like to feel Las Vegas experience by winning a few nights in a luxury hotel in Las Vegas, playing the casino fiends or for those lovers of a live show. Once you’ve given the book a read you can also watch Johnny Depp’s take on Thompson’s depiction of gonzo journalism, ably assisted by Benicio del Toro for whom the phrase “Too Weird to Live, Too Rare to Die” was aptly coined after his myriad run-ins with Vegas casino owners. Then, your reading done, it’s time to admit to yourself that you owe Vegas a visit, and that the only right way is to do it how Hunter would have wanted, gonzo style. Make him proud and allow yourself to be guided by the following top tips.

Showing up in Vegas on a plane or in a standard saloon rent-a-car is not an option, not when you’re trying to channel all the fear and loathing possible. Only a vintage red 1973 Chevrolet Caprice soft top convertible will do, or something at least close to the American muscle car’s specifications. Remember, like Raoul Duke, you’ll need plenty of space for luggage and all the speed an engine can muster to outrun whatever you may encounter out on the desolate highway. 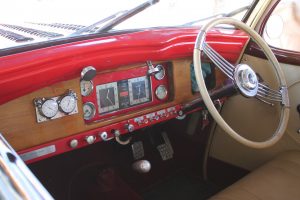 Vegas only felt right for Duke when he was running up an outrageous room service tab in the Flamingo Hotel, a tab he hoped would be picked up by the newspaper he worked for at the end of his stay. There are certain hotels that will allow you to follow suit, such as The Cosmopolitan that specializes in pairing homemade chocolate delights with champagne. If that’s not decadent enough for you then head to Aria, where a mind-boggling menu is offered, all brought to your door, beneath steaming chrome cloches. Go on, treat yourself to a whole lobster and four-cheese pizza, all washed down with a cocktail.

Make Friends with the Locals

While driving around town with his trusted attorney, Duke chose to defy convention and helped a hitchhiker in need. Of course, the character played by a young Toby Maguire soon declined the offer of a ride after being unnerved by the wide-eyed men in the front seats, but that shouldn’t stop you getting to know the Vegas locals. Let’s be honest, some of the stories they have to tell probably eclipse any of the meek recollections you’ve repeated at dinner parties over the years.

Go Hiking in the Desert

Okay, okay, so Duke wasn’t exactly into his sports unless he was betting on them, but the most famous line in Thompson’s book talks of climbing a hill in the Nevada desert, because it’s the best place to watch the wave of spiritual enlightenment that swept the US in the mid 60’s, as it recedes and eventually evaporates in the face of a corporate onslaught. It’s where Thompson would want you to spend your last night in Vegas, wondering what might have been.