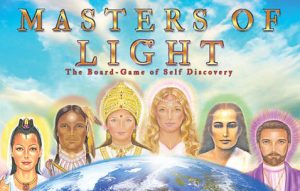 Based on a true story that happened last Christmas.

Laura Alaimo-Magnifico had barely spoken to her brother since she was a young child. After a long family dilemma that dragged them both into a bitter dispute, she and her brother were separated as children. Now, as adults, they could barely recognize one another.

But while playing the Oracle Board-Game, Masters of Light, with a friend last Christmas, she drew a card that challenged her to Call someone she had not spoken to in a long time and say I love you.

She immediately drew up thoughts of her estranged brother and Laura took on the dare by leaving her brother a voicemail, telling him how much she loves and misses him. It was challenging and daring, but this one small gesture had profound effects that sent ripples to her entire life.

As Laura recounts: “I had only spoken to my brother off and on occasionally since I was 9 years old. I had never had a real one-on-one conversation with him. However, that night when I left that message, it was just me telling him what I really felt in my heart.”

Unexpectedly this set off an incredible sequence of events with her brother calling her back and the two meeting for coffee shortly after. The small dare of saying the words ‘I love you” transformed her life and led towards them rebuilding a new relationship, and eventually bringing the entire whole family together after 25 years. All from three simple words.

But how often do we have the courage to say I love you? To reach into this place of deep gratitude and just let the words come flowing out to all the ones whom have given us so much?

We were inspired by this Christmas Miracle and wanted to create a challenge also for you to reach out and simply say I love you.

On the first list, write all the people you are thankful for in your life. Perhaps a loved one, a parent, guardian or just that epic friend who is always there for you when you need! This list should have ones whom have helped your journey, provided joy, inspiration and that you are just simply thankful for.

On the second list think of all the people you love, but haven’t reached out to in a long time. This could be an old friend, a past relationship, or somebody you still hold dear in your heart or maybe don’t even know . Whomever it is write it down!

Now for the action. Make a commitment to say “I love you” on phone, e-mail or in person to all these souls over the holidays. Dig deep and pledge to enter 2020 with all your loved ones knowing you are thankful for them through the good, bad and the ugly!

And if this sounds real daunting you can always make it playful by using games like Masters of Light that encourage you to open your heart, engage in acts of kindness and make yourself open to full inspiration.

For more information on Masters of Light, please visit https://www.mastersoflight.world.