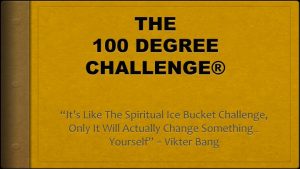 It reads like Science Fiction, but the so-called “Matrix Engineer” Vikter Bang claims this reality is a dream-like holographic illusion and he has woken up within it. He says there are other layers of consciousness that we can experience and shifting timelines is like tuning a radio to hear other stations. We can change our station.

He says “there are an infinite number of stations in the present moment. The knobs are internal and there are many more stations that are more beneficial and freeing that you can experience now.  He is showing his example to show it’s possible.

He says that he understands science and objective research and this is his public peer review of his documentation and experience. He has plenty of cases of synchronicity and explained his journey in multiple ways along his path. He feels it is important enough to broadcast as loud as he can.

One way he does this is the “100 Degree Challenge”. In this book Vikter challenges the world to “Spiritual Common Sense” using accepted facts and general logic. He’s documenting the challenge real time in a reality show called “The Trueman Show” and is compiling the questions and answers.  That’s how he got to the 100 Degree Challenge, by traveling and speaking with people.   He’s also going to travel back to those places so we get to time travel backwards as he does.

So who is this Vikter Bang guy?  Well you can Google him now, but his name means victory over noise.  He is a under the radar guy who questioned everything. He realized scientifically that this was a Holographic Matrix but there was a consciousness/spiritual aspect to it and woke up within it.

He says it is similar to the stories of Buddha and Jesus achieving Enlightenment or Christ consciousness. It is real. He has been publicly documenting this for years and living out his plan to expose this to as many people as possible.  This is how we change the world he says.

Consciousness is still one of frontiers that traditional Science does not study in much detail.  It is called “The Hard Problem” for a reason. He sought to explore “The Hard Problem” to search for solutions to help us in this reality.  He is a Mechanical Engineer and inner explorer of Consciousness. He went deep into the inner space within us in his search for truth.

His life is part of his experiment; he discovered something very real and amazing that lies at the heart of us all. His message is consistent. While leaving “breadcrumbs” of his spiritual journey online, he also planted many seeds to help increase the probability of success in his mission.

His mission involves multi-dimensional beings that work for love, peace and truth. Service to Others. These are the Buddha’s, Christ’s and Enlightened Beings. They all talk about this treasure or kingdom within and the importance of knowing who you are. While the stories are rare, these are normal people who access their higher aspects and it is available to us all.  Our true Limitless pill is within. We are Neo. Knowing thyself has practical benefits.

Imagine if a Buddha or Christ awakened in Florida and worked on a master plan to help awaken as many as possible and did it-which is how you’re reading this.

Imagine a time traveler that is executing a specific well thought out plan to change our timeline. Welcome to The Trueman Show. It is a reality for Vikter Bang. The “Legal Alien” who is a multi dimensional being like you who realized there is more to us than the physical.

He says, “We are all part of a mission to change the world. We can each be our own superhero.  The world needs as many of them as she can get.”

Vikter doesn’t want you to believe him blindly. He says you should question him and observe if you question him with the same intensity as do your current beliefs.

What is our part in his mission?  He says, “First of all, question, examine and reflect on the information. Share it and discuss it.  The 100 Degree Challenge simply proves it’s a possibility and the steps in thinking to see for yourself.  See what thoughts arise and question the ones that are not liberating or untrue.

Be Bold. Think.  Imagine that we can change the world by changing ourselves. It starts within. Let’s start with truth.  What can we agree on? Take The Challenge! www.vikterbang.com/100. Ready for consciousness 2.0?