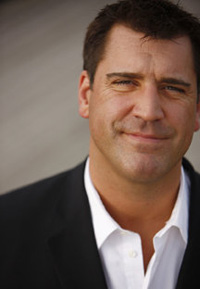 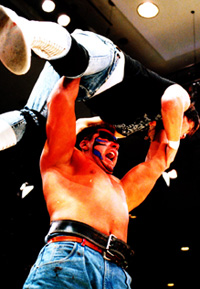 Rick Bognar is the author of “Wrestling with Consciousness,” a book contrasting and comparing the inside world of pro wrestling that he spent 10 years in to a spiritual awakening that he has been experiencing for the last 10 years. I had the pleasure of interviewing Rick about his experience as a professional wrestler, insights on how we can live a more meaningful and compassionate life style, and what prompted him to seek out a deeper spiritual path. You can read our interview by looking at transcript below or download an MP3 of it for free on Spiritual Media Blog’s iTunes Podcast by visiting:

Matt: What is your book about?

Rick: An uplifting autobiographical story of a pro-wrestler forced to leave behind the only life I knew and adapt to “normal” life after the “Game”. This was achieved through the practice of Buddhism and other spiritual practice. Follow me on a liberating journey of compassion, finding self-love and love for others after walking a deep dark path. Much of my story is based on the emotional suffering as an athlete and entertainer and how I achieved a graceful transition after the fame and fortune had disappeared.

Matt: What is the message of your book?

Rick: How we, as humans, can move away from the dark side of life and spot the light at the end of the tunnel while still in despair. I suggest tools to use, which have assisted me with my mental strength and resolve as I attempted to climb my own “Inner Mountain™.” These tools will help my readers let go of old habits and thought patterns then rewire those thoughts through focusing on aspirations of who and how they want to be, setting very personal goals and working happily towards them.

Rick: At the time of wrestling, I blocked it. I felt that life could and should be different but my current life situation and environment at that time would not allow for it. I had to “play the role” in order to be a success. I let my family down and in turn myself by pushing to be a tough, uncaring stereotype. It was considered a sign of weakness to be caring and compassionate in the industry. I learned to be passive aggressive and not show my feelings, never opening up and never trusting anyone. I engulfed myself in solitude.

I had sensed there was a higher path and felt a gut pull toward reaching for deeper meaning but the competitive, superficial environment I was immersed in sidetracked me. I always had a natural gravitation towards compassion and peace in life but at this point, it was just a feeling I had not put into practice yet.

Matt: Did you find it difficult to move from a life of ego, aggression and being ‘things’ and task oriented to one of egolessness, compassion and deeper-meaning oriented as a professional wrestler?  How were you able to do that?

Rick: Yes, it was a slow process. Coming from a way of life where my value as a human being was judged by how physically powerful, aggressive and dominating I was, how many fans I drew or how much I made for others. I became an Automatron. I also became a nervous wreck. I knew I was only as good as my last match and this was my value as a human being. “What have you done for me lately?” made me strive to be bigger, better and more innovative than other competitors in the spotlight. I became very, very proud of being a top guy. A lot of Ego went along with that. I would look at myself at one point at 29 years of age and say “Is this really all there is to life? There’s got to be more.” Suddenly, my mind opened up to the possibility of the opposite. If all of this Ego stroking was making me miserable, then wouldn’t the opposite make me happy? It was something I knew but didn’t know why. I did not yet know how to practice it due to the mental gripping of “I am so important” and “People treat me like a King.” This was my daily thought routine which would steer me away from dropping Ego.

Compassion came when I realized how such a huge sense of self-inflated importance hurt others as well as myself. Currently, I know a millionaire who is deluded of the same affliction. Without money, without muscles, without being on TV would you or others think you were so important? No. No one would listen to you unless you cared about others.

During my last year of wrestling, I learned to get past myself and show interest in others. I read philosophy by Plato and The Book of Buddha afterwards and made it a practice to be interested in and show empathy toward others. This is hard to do when I was in the spotlight. It was always all about me. Not others. Age and maturity have helped progress the journey! I have also learned that getting angry is just a self-centred weapon of control. Most times it only hurts the person serving up the poison. We harbour anger within. It poisons only us. Others do not feel it. If we lash out, we time-release a toxin that eats us alive. We wallow in it for a long time. Guilt, self blame and regret follows. Damage control and endless apologies are the external side.

Matt:  How do you balance letting go of aggression, ego and being ‘things and task oriented’ with still following your passions and trying to achieve your goals, especially as a professional wrestler?

Rick: It is very hard to get a sense of letting go, while being pressured by the promoters and the fans to always out do myself. Both of these people fully expect a new improved caliber of workmanship each time I would perform. Being involved in Professional wrestling is an extremely tense and intense lifestyle. I did not have much time to relax because I was always “On” and when I did, I could not relax. I came to the conclusion “I need to get out of this business to be who I want to be.” I have seen my Yogachariya friend get pushed for quotas before and noticed how peacefully, step by step he handled these situations. I have learned how to step back but still take action in a detached manner which seems to work.

Passion is good, but anything to excess becomes unhealthy. One could become a workaholic or a sex addict for example. If passionately in love or passionately angry both are just one step across a very thin line. They are the opposite but yet so close.

Matt: How were you able to let go of your aggression and ego and still maintain the focus needed to be a professional wrestler?

Rick: It was very hard to stop wrestling and get out of that toxic environment. For every step forward, it became two steps backward.

Matt: What sparked you to try to find a more spiritual path or deeper meaning in life?

Rick: I had a deep yearning to escape the emotional suffering of loneliness, my fragile Ego and my strong ignorance. Buddhism had the right answers to my questions at the time. I felt I was on the right path and continued on it.

Matt: What advice do you have for other people who are aggressive, but would like to live a more compassionate life style?

Rick: First, practice awareness. Be aware of your inappropriate or hurtful anger. Be honest with yourself. This can be hard. Old patterns are hard to change. Pay attention to your gut. If it feels bad, it usually is bad.

Find the antidote. Try to turn negativity into something positive whether it be about a person or situation. For example, take a traffic jam. Instead of being angry and upset think of it as possibly saving you $160 on a speeding ticket!

Matt: How can we maintain our spiritual practice while in environments that don’t lend to keeping our emotional fitness?

Rick: My teacher had taught me years ago that spiritual practice isn’t going into a cave in the mountains, becoming a Hermit and meditating for the rest of our life until we reach enlightenment.

Spiritual Practice is using the tools we’ve learned in challenging life situations with our children, family and jobs to maintain a sense of compassion and love no matter what the exterior circumstances are. That is what it is all about. Bringing our meditation and lessons with us and maintaining our integrity wherever we go.

I was challenged recently to start training an old wrestling student again as a favour. I found myself then getting caught up in old patterns. Ego and aggression stepped in a bit and I had to step into being the ‘Observer’ and practice discrimination with myself. “Is this who I want to be, or how I want to represent myself now?” I asked myself. The answer was a resounding “No!” and I went in next time as the ‘Witness’ to myself and came out in the same state of mind after the training that I had went in with!I even used that state *during* teaching! It made for a much deeper experience in class.