FINJA is the creator of original songs inspired by life, love and spirit. Her intention is to uplift her listeners out of time and place and move them into a state of joy and empowerment. She believes in the virtue of music as medicine and its inherent ability to bypass the noise of the head and be received in the heart. Her bold and buoyant message is expressed through her music and the way she lives life. But this hasn’t always been the case. For Finja, adversity and drama was the catalyst that propelled her out of a life lived dreaming in the shadows and onto the path of making those dreams a reality.

Finja had always wanted to sing, write and perform her own songs. But, like most of us, she kept her singing to the confines of the shower, and as she “grew up” she convinced herself she’d missed the boat and that her dream was an unrealistic one.

In her mid-twenties Finja studied metaphysics and consciousness, and discovered bhakti yoga, kirtan and plant medicine circles. At age 29, right in the middle of her saturn return, she moved to Ubud, Bali:

“A place where spirituality and self-expression go hand in hand. It was liberating and inspiring to be amongst it.”

Being in a community of open-minded, spiritual seekers she began fantasising about using her voice to uplift others. It was here that she met the father of her firstborn child. Finja fondly describes him as an incredibly playful character and their relationship as a wild adventure.

“He helped bring my voice out with his words of encouragement. Beating my chest as a drum he would tell me I shine. We would ride our motorbikes down the streets of Ubud singing at the top of our lungs and laughing hysterically like school kids. It put the playfulness back into singing and the joy back into my heart. I felt like a care-free child, a feeling which was missing in my youth.”

As fun-loving as their relationship was it was also very volatile. After two years of chaos it ended in a painful separation. One year later Finja was informed of the suicide of her former partner. This was a devastating blow and Finja felt a deep sense of loss and regret for what could’ve been.

Her now husband, a new friend at the time, sent her some recordings of Abraham-Hicks; source energy channelled by Esther Hicks and master teachers of the most powerful law in the universe – the Law of Attraction. From their perspective, every death is a form of suicide. Their teachings describe us as eternal and that there is no death, only life. This is because we move as individual conscious spirits between the physical and non-physical planes. These concepts really resonated with Finja.

“It took the stigma out of suicide. I released the guilt and shame I felt, and the fear of blame from others. I made peace with his choice and I felt love for him in a more unconditional way.”

During her time of grieving Finja removed herself from the influence of the outside world. She went within and the songs started to pour out of her. The first one she wrote was borne out of a desire to honour the love that existed between her and her deceased former partner. In her despair she found the courage to approach a producer, expose the vulnerability of her heart and mind and begin recording; a process she describes as thrilling.

Now, just two years later, and having officially released her debut single ‘Calling You Home’, she feels only gratitude for what she describes as her dark night of the soul.

“It motivated me to pursue my dreams. I was tired of feeling low. It was so painful that I found a new determination to feel good, to see the light and create a future that could be very bright.”

‘Calling You Home’ can be described as a beautiful lullaby that is sung from the perspective of your inner being, your spirit within, to you. Inspired by the teachings on manifestation by Abraham-Hicks, Finja’s intention is for it to remind you of your divinity and to gently empower you with the knowledge that you can do, be and have whatever you want. 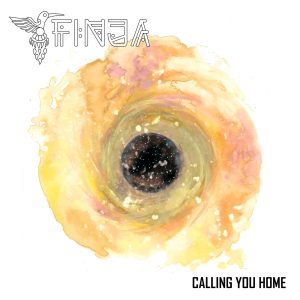 Reflecting upon her journey, Finja credits her new found sense of freedom and confidence to the adversity she faced and, specifically, to the tools she received.  These tools of manifestation empowered her to transmute an experience of tragedy and misfortune into a life lived in joy, power and purpose.

“I’ve finally given myself permission to sing from an untrained, intuitive space and to songwrite for the pure love of it. I craft my lyrics to remind my listeners, and myself, that our power and potential as humans is limitless.”

FINJA would like to offer my readers a FREE MP3 DOWNLOAD of her single, Calling You Home, found here: