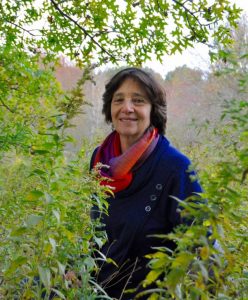 The title of your book is Edna’s Gift. What is the nature of that gift?

Like no one else in my life, my sister Edna loved me unconditionally. I was her wonderful “sister Susie” no matter what.  She gave me my earliest experience of what it means to be accepted the way I was, no matter what.  And more than that, this was Edna’s way of being in the world with everyone including herself. As a child when she went to a recreational club for handicapped children, she chose one of the most severely challenged girls as her best friend. Fritzi could barely speak, and was wheelchair bound. But that didn’t matter to Edna. They sang show tunes, and played records and had a grand time!  And while others judged her as “handicapped”, a word I learned at a very young age, she was okay with herself.  Oh, she knew there were things she was unable to do, but these were merely facts, not attributes to be used to judge someone. She saw herself as “differently abled” about 60 years before the term was coined.  I like to say she held me in wholeness. There is no greater gift!!!

Also the words broken and whole appear in your title. What is the importance of these words to you? How do they apply to your life? And what is the connection with a spiritual path?

“The wound is the place where the light enters you.”  Rumi

The intention and driving force of my book is the exploration of brokenness and wholeness and how they are profoundly and inescapably related. It is a complex multi-layered subject.

On the most basic level if a chair leg breaks, we consider the chair to be broken and we either throw it away or fix it, and then it is whole again. But what happens when we apply this view to people who are challenged or different? Are they broken? Do they need to be fixed? Yes, we can put a cast on a broken leg. Yes, we can have speech therapy to correct a lisp.  But our society then goes a step further and devalues and stigmatizes those who are different.

Growing up with an all-pervading experience of this, as Edna and I were so close, only a year apart, I was drawn to other ways of understanding, which led first to psychotherapy and then to other spiritual paths.  So in Judaism, Moses smashes the first tablet with the ten commandments on it, when he comes down from the mount, and sees that people have been living in an unethical way. He receives a second one. And all through their wanderings in the desert, the Jewish people carry both the broken and the whole tablets. Brokenness is part of who we are. In the Buddhist perspective we are all intrinsically whole, lacking nothing. Our belief systems may keep us from this truth, but this is our true nature. Through a practice of moment-to moment-meditation we can access this experience of wholeness.

Ultimately, and paradoxically, it was Edna herself and her way of being that became my first model of understanding. And that brings me back to Rumi. Quoting from my book, on the deepest level we are “always broken, forever whole.”  The two are inextricably interwoven.

What was difficult about growing up with your sister?

I grew up with a kind of survivor’s guilt. There were so many things I could do that she couldn’t. I had friends, she didn’t, I could ice skate, skip, jump rope and play the piano, all of which were beyond her reach. I felt so guilty that I could enjoy these things and she couldn’t. The result was that although I didn’t stop myself from participating, I often would suppress my excitement and joy, so as not to make her feel bad.  (That she would feel bad was mostly in my head, not hers.) I wouldn’t talk much about my experiences or triumphs. But worse, over time I didn’t feel much about them.

As an adult I have learned to allow myself the full experience of life. But sometimes I still bend over backwards not to offend or have people feel badly, when I’ve accomplished or experienced something they haven’t.  Publishing this book has been a wonderful journey towards experiencing the joy of actually finishing a monumental ten-year project! And this is even though some people close to me might have wished to do so, but as yet, have not.

Society often misunderstands, labels and undervalues people with disabilities, seeing only hindrances instead of a whole person. How did you and your family deal with this as your sister and you were growing up, and what were the lessons you learned from it?

As a family we judged people by whether they were kind to Edna or not. If they were kind we were grateful, and they could enter our gates. If not, we turned our backs.  Looking back it was like we were a handicapped family. We were sailing on different kind of ship than the families around us. And certainly while I was growing up I internalized that label and felt inadequate.  But later on I learned to feel compassion for anyone who walks through life loaded down with labels. My ability to feel empathic is in large part what has made me a good psychotherapist. In a way I have spent my life learning not to label people or myself, not to think in terms of hierarchy or comparison, not to see the world in a polarized, black and white, or have and have not way.  There is so much scarring and suffering that happens from this way of thinking.

How has being Jewish, and first generation American been a part of your life?

On the one hand I had parents with thick accents, who didn’t understand some of American culture. And in addition to my sister, that was just another way that I felt different and marginalized. I just wanted to be American and do things like drink coke and get a permanent for my hair, things my parents disparaged. As a child one aspiration I had was to be a drum majorette, and I convinced my mother to let me have baton twirling lessons in addition to my piano and dance ones.

But on the other hand I was fiercely proud of my parents who had the wisdom to leave     Germany in the early thirties, because they saw the writing on the wall. They had a long refugee journey, which ended in NYC, where I was born.  I grew up with a strong Jewish consciousness and a pride in being part of a group of people who has survived for thousands of years, and in the process made so many contributions to the well being of humanity. While we didn’t belong to a synagogue when I was a child, as an adult I have been a member of two wonderful synagogue communities, where I have always felt welcome.

In your teen years, you discovered your own invisible disability.  How did that affect your relationship with Edna?

Yes, just short of my 16thbirthday, when I hadn’t yet menstruated, my mother took me to a gynecologist and I learned that I was born without a uterus, and would, in fact never menstruate, and of course not be able to have birth children.  At first, I felt like I was now with Edna in the deficit pile. I was now damaged goods just like her.  Later in life I found out this syndrome has name: MRKH, and there are other women like me. For an inexplicable reason the doctor never gave me the actual name, and I grew up feeling like a complete anomaly. But in fact, how lucky I was to have Edna. It was her way of being and love for me that became the core of my strength and ability to find my way to self -acceptance. 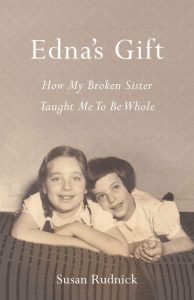 What is the meaning of the kaleidoscope metaphor that emerges in your book?

A kaleidoscope has a fixed number of colored stones that create a pattern. But if you    turn it even the tiniest bit, the stones rearrange themselves into another pattern. This is a metaphor I use in various places to illustrate the possibility of seeing the same situation or issue from another perspective that actually changes your reality. For example, toward the end of her life, because of health reasons, Edna needed to leave the spiritual community where she had lived for almost forty years, and move to a nursing home. I was horrified. But after awhile it turned out that with the 24 hour 7 care she got, she actually could live more independently than she had in her previous life.  She arranged her own activities, took cabs to the local town for its greenmarket and went to concerts by herself. The kaleidoscope turned and I saw it all another way.

When your sister died you say it was a transformative experience for you, and led you to write the memoir. Can you say more about this?

After Edna died I really missed her, and although I had always known she was important to me, I didn’t quite realize how significant she really was. Writing the book was my journey of finding out. As I wrote I kept discovering more about how she helped me, just by being who she was.  Also, like many challenged people, her life and accomplishments are not as visible as those of so-called normal people. Even friends and colleagues of mine didn’t know much about her.  I wanted to honor her and make her life and its impact on me palpable and visible.