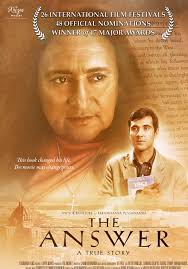 Peter Kretzmann is a lifelong devotee of Paramhansa Yogananda through Swami Kriyananda. He played Reverend Bernard in the The Answer. The Answer is an award winning narrative feature film. It is the true story of an amazing spiritual journey involving Paramhansa Yogananda and an American, James Donald Walters – who later becomes Swami Kriyananda. Below is my Q&A with Peter about the film…

1. The film tells the true story an American, James Donald Walters. The film portrays his youthful quest for truth, which took him from his birthplace in Romania, to Switzerland and England, as far as the United States, where in 1948 in Hollywood, he has the extraordinary meeting with Paramhansa Yogananda. What led or inspired him to come to the United States and eventually Hollywood?

From a young age James Donald Walters was searching for Truth. Throughout his young life he sought it in science, social systems, writing and theater, even in the peace the countryside. Yet everywhere he looked, the answers were falling short. When he read the Autobiography of a Yogi by Paramhansa Yogananda, he was thrilled to his core. He knew he had found someone who had what he was seeking. Without even bothering to write first, he simply took virtually the next bus from New York to LA to where Yogananda had made his home. Their meeting in September of 1948 would shape the rest of Walters’ life. He spent the remaining 65 years of his life to serving his guru.

2. How is Parahansa Yogananda’s message relevant to people today who are worried about their financial situation, finding meaningful work, or trying to meet their basic needs?

Paramhansa Yogananda came to the US in the Roaring Twenties, lived in LA through the Great Depression of the thirties and through World War II. His approach with Americans had to be intensely practical. Throughout his life he showed how the timeless truths which he represented applied directly in our daily lives. During the Great Depression he said “If I didn’t have a job I would churn the ether until I had one!” He showed that spiritual truths hold sway over this world we live in. With great energy and magnetism we can accomplish all that we will to do in this world.

3. Moreover, how would Parahansa Yogananda suggest that we move from a survivalistic mindset to a thriving mindset?

He taught that we are happier if we give and are expansive in our hearts and minds. When we hoard for ourselves we contract and limit ourselves to a very small self-definition. When we can expand our sympathies our self-definition grows more broad and we find ourselves being much happier. We are God’s Children and we are a part of Him!

One interesting thing on set is that Victor Banerjee really looked like Paramhansa Yogananda. Several times, after seeing him out of the corner of my eye, I would turn quickly to see him, because for that split second my mind would think it was really Yogananda that was there with us. It was just the mind playing tricks I suppose, but I let myself just go to that time and feel what it might have been like for those devotees to be there with the master. As a devotee myself, it is incredibly sweet to think that the guru is just in the next room and might walk in at any moment to say hello. That nearness blesses my heart even now.

***************
The Answer opens in theaters this week in Santa Monica, CA February 27th at Laemmle Monica Film Center @7pm. For more information about the movie and screenings, please visit its website at https://answermovie.com/epk