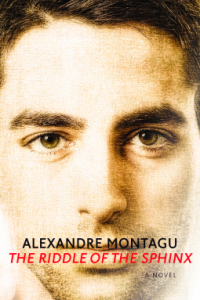 Your new book, “The Riddle of the Sphinx” seems to have everything– adventure, a heartbreaking and obsessive love affair, suspense, psychological drama and a journey toward self-discovery. How would you characterize your book? What genre or genres would you place it in?

You can read this book on three different levels. First, on the level of plot, it’s about a young man who desperately tries to escape Revolutionary Iran, a young scholar whose career and life are derailed by a tragic love affair and a middle aged lawyer at the pinnacle of a successful career at a top law firm who finds himself dissatisfied with and disconnected from what others may consider a perfect life. You can read the novel just for that and hopefully enjoy the storyline. On another level it is about the political and social history of the Iranian Revolution, its unfolding through the eyes of one family and their aftermath in exile. While there are countless books on the political forces that caused the Iranian Revolution, there are few that tell the story from such a personal perspective and even fewer that tell the story of Iranian exiles. For this reason alone, the Riddle of the Sphinx is worthy of a read.

But the novel can be read on a third level, perhaps the most fascinating and that is a philosophical and spiritual angle, which as the epigraphs at the front of each part signal, follow the noble truths of Buddhism. The Buddha answered the question “Who am I” by starting with a negative, “who am I not” and so the protagonist in the Riddle of the Sphinx, when confronted with this primordial question of identity, begins to strip away the false selves which are mental projections that he had confused for reality, as had Oedipus in Sophocles’ play “Oedipus Rex” from which the novel derives its title.

As for the genre, I would say it’s literary fiction and while I would never presume to compare myself with someone like Albert Camus, his novel “La Peste” (“The Plage”) is similar in that it can be read and enjoyed on three levels—the plot, the social/political history of fascism/Nazism and the third level that explores evil from a philosophical and existential perspective.

What inspired you to write the book?

About six years ago, I started to learn about Buddhism and its teachings on meditation, mindfulness, wisdom and compassion. As I deepened my studies as well as my sitting practice, it began to occur to me that there was a whole dimension of my life that I had been completely unaware of until that point. Carl Jung said “Who looks out dreams; who looks in inside awakes”. I started to look inside and wake up—which for me has been a very gradual process. But then I realized that these teachings– that insight and wisdom come from looking in rather than grasping and groping outside—are not just part of Eastern philosophy. They have been written about in Western literature, beginning with the Greeks and all the way up to modern times with writers such as Marcel Proust, who I studied a great deal as a Comparative Literature major at Princeton. How could I have missed this for half my life? So I went back to these works that I loved and I read them as if with new eyes and this inspired me to write this novel.

What experiences, in your background, did you pull up to write this new work of fiction?

I drew on the places that I had been to and knew well – Teheran before the revolution for example; my family was quite close with the Royal Court and growing up there, not only did I draw on my own experiences but also my parents would tell me stories that have stayed with me. And then of course the revolution and its aftermath and although I wasn’t in Iran during and after the revolution I knew a number of people who were and I spoke with them at length about their experiences. The second part of the book takes place in the 1980s in Princeton, which I went to and know well but also at well known spots such as the Wimbledon tennis finals or the Bain Douche night club in Paris, all of which I’ve been to. The prologue and the last part of the book take place in New York, at a major law firm, as well as venues on the Upper East side, the Hamptons and a well known private school. Again I have personal experience with all of these places, which helped me write the story.

What was your early life like and how does it compare to your life now?

My early life was in Iran before the revolution and then at boarding school in England. On the surface of course it’s a very different life. Life under an absolute monarchy isn’t the same as in a democracy. But you know something, the U.S. today is starting to resemble that world that was swept away by a revolution. Rule by a small elite who control the levers of power, whether it’s the executive branch, the legislative branch or the media. There are parallels and definitely some lessons to be heeded. I’m not saying that the U.S. today is facing a revolution but if we continue down the same road without making key changes to improve the lot of the vast majority of people, there could be trouble ahead. And it can come very quickly. If you read my book, you see how swiftly the revolution took off and how it took the ruling elites in Iran by surprise.