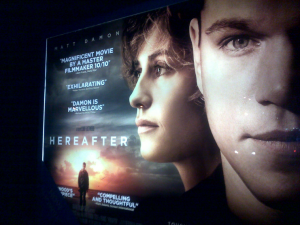 Clint Eastwood is a praised champion of heartwarming cinema and powerful messages, and his 2010 Hereafter does not fall short either. While critics and reviewers wanted to “see” a dramatic display of the afterlife, Eastwood played more with metaphors, symbols, and delicate layers of intertextuality, gently including them in the narrative and thus telling a compelling story, notabout the afterlife per se, but more about what it means to people. Let’s learn more about it today, shall we?

The Afterlife Debate – An Eastwood Perspective

The afterlife was and still is in the limelight these days, with writers and directors taking a shot at the Unexplainable. Movies such as What Dreams May Come, A Matter of Life and Death, or Heaven Can Wait managed to offer both compelling stories and spiritual intricacies to ponder upon in our quests for introspection. Hereafter wanted to be an eerie, bold, problematic, and strange foray into what life and death, heaven or hell mean for each of us – and in this regard, it succeeded.

The movie has a crowd of detractors saying that the entire afterlife concept received a “basic cable” treatment. No special effects, no out worldly imagery, etc. They all considered Eastwood’s views on the matter vague and unsophisticated.

Other critics, nevertheless, saw more than just a movie with blockbuster potential weaved together with spiritual, philosophical, and psychological themes.

An Introspective, not inflammatory view on the Afterlife

Rolling Stone’s film critic, Peter Travers, saw this movie as a personal spiritual journey for the famed actor and director. A visionary in his own right, Eastwood did not bet this movie on the “shock factor” card, offering viewers a spectacular take on the afterlife.

Just as Travers suggested, when people take a glimpse of the other side, they feel both the terror of the unknown, the relief of their beliefs, the sense of wonder and surprise, a child’s curiosity, and an adult’s sense of regret. Such powerful feelings and their display on the silver screen do not need a Michael Bay’s approach to them, but sensitivity and a gentleness few directors can manage. Eastwood did not tap into sensitive matters, religious bias, or whatever criticism of spirituality is trendy these days.

What he offered was a haunting experience for each of the characters he followed dispassionately, in tune with their wonders and fears. He let the characters have their own experiences, live their moments without interfering in their journeys.

Moviegoers may have wanted action scenes and striking visuals, but instead,they got blurry figures, blue filters, and bright lights. While this display of the world beyond the veil did upset the majority, many appreciated little details that made the story so compelling and the message so luminous.

The Metaphors and Symbols of Hope

We aresure many said “That’s it? That is the afterlife? Disappointing!” when gazing upon the blurry figures. But few have seen the metaphor hidden by the Dicken’s Dream painting. The psychic (Matt Damon) considers the afterlife to bea meeting with people from his life, all clad in light, with each person stepping out of the shadows to communicate with him. The Dicken’s Dream painting depicts the famous author dreaming about all the book characters he brought to life.

In association, you can consider that Clint Eastwood sees the afterlife as a beautiful dream, a natural effect of sleeping, and a place where you meet all those you loved during your earthly life. What if the afterlife is a place of infinite joy where all the essential characters in your life’s story gather to meet you and accompany you onto your new path?

Another scene of importance is the cooking class one. The psychic and his partner take a more sensual route on describing how foods smell and taste while blindfolded. However, they remain unable to name the foods they so enjoy.

Besides being a graceful and sensual moment in the movie, we find it to be another example of how Clint Eastwood perceives the afterlife. We are blind, incapable to name it, see it, give it dimension, and color, and shape; but we are indeed conscious of its existence. Its otherworldly reality is in our grasp, but it remains closed to us, inexpressible, hidden still.

The hazy, dreamlike depiction of the narrative, while bothering for some, is indeed worthy of a re-watch to catch the symbols and grasp the connections.

Since Clint Eastwood never said he would show us how “the real” afterlife looks like, reveal us a truth keeping humanity on the edge of its seat since the first ray of light shone upon our world, expecting him to offer definitive explanations and visuals is far-fetched. Eastwood never promised us proof of Heaven (that is for Dr. Eben Alexander III), but he delivered us a lesson about how wonderful life truly is.

What he offers us is a personal challenge and a reason more to search our hearts. Maybe, for once, we do not wonder whether there is an afterlife after all, but whether we loved and had been loved by enough people to wait for us on the other side and reveal their secrets to us.

About the author: Erik Winther is a passionate blogger from Southern California and the creator of Netflixguides.com, a site made to help all TV and movie enthusiasts keep up with the latest shows coming on Netflix.