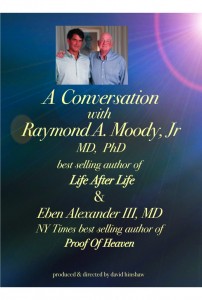 Throughout the film, their conversation advances the discussion to a whole new level questioning the scientific and spiritual methodology, offering new insights into the ultimate human questions. Their discussion goes beyond the normal emotional, subjective, discussion to consider science, quantum physics, the question of the soul and the possibility of the eventual combination of science and spirituality as partners rather than adversaries. Some of the highlights of the film are:

– That consciousness does not depend on the brain but, is much richer when it is freed from the brain
– Dr. Alexander’s concept of a Soul School and why we are here
– What is the greatest lesson of all NDEs?
– Dr. Alexander reveals the identity of the mysterious angel who was his guide while he was having his beyond death experience

As you watch the film, you can see the passion, joy and openheartedness in Dr. Alexander’s face (a former agnostic neurosurgeon) as he talks about what it was like to have a near death experience that, he, a medical doctor, could not explain via science. His account sparks Dr. Moody to respond with delight and compassion.

This movie shows firsthand how a near death experience can truly be transformative. It also restores our faith in the possibility that their truly is life after death and that the Divine has a plan for all of us.

For more information about the film, you can visit www.Raymondmoody.org.