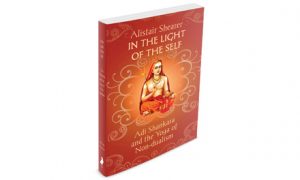 1. What is the book about and why did you write it?

It’s an account of one of one of the world’s greatest spiritual teachers, who lived in India about twelve hundred years ago and was called Adi Shankara. The book falls into two parts. The first is an account of his early life and apprenticeship with his Master, imagined from the very sparse historical evidence we have, while the second and longer part deals with his teaching. As an Indologist, I’ve been interested in Shankara for years, not least because I was curious how someone who reputedly taught that the world is an illusion should have had such a profound influence on Indian thought and still enjoy the huge respect he does. So, I went back to his commentaries on the great Sanskrit scriptures to see if what he said could really have any relevance to where we are today. What I discovered was a message that has huge contemporary relevance! It is not some dry philosophy but a practical psychology that tackles the perennial problem of human suffering head on and helps us understand and transform our lives.

2. What is the Yoga of Non-duality and how is that similar or different than other types of yoga?

Yoga is everywhere today, widely understood to be postural work, physical exercises on the mat. That’s fine and brings great benefits but it’s only half the story, at best. The Sanskrit word yoga means ‘union’ and what is meant by that is the union of the limited individual mind to the cosmic intelligence, the joining of the human with the Divine. So properly understood, yoga is a spiritual discipline that starts with the body, moves on to deep meditation and ends in enlightenment. The experience of those who make this journey to the real Self is that our limited sense of being an isolated ‘me’ is an illusion. The person who experiences the duality of separation from, and often conflict with, the rest of the world is living a waking dream, a collective hallucination! Our true status is that we are one with the universal consciousness that is also manifesting as the ‘outside’ world, and so there is a state of unity or ‘non-duality’ between ourselves and everything we imagine to be ‘other’. In the light of truth, we are all one, different manifestations of the same divine ground of being. This is not just some faded hippie theory, but a direct and living experience that we also find recorded by all the great seers and mystics over time, no matter what their religion or culture.

3. What would you say to someone who has practiced yoga for years, but still experiences stress, anxiety, and frustration on a daily basis?

Learn to meditate! Your question proves my previous point exactly: if we confine ourselves to a bodily practice, there is only so far we can go. Physical yoga is great, but it’s the jumping-off point. As Shankara says ‘the body is the perch of the mind’; so we must let the mind move inwards beyond the body and contact the inherent peace and creative wisdom that is always there deep inside us.

4. How can your book help someone who is in a career they don’t like or are struggling to pay their bills?

Our life is the creation of our mind. The same situation can be viewed as a problem, a challenge or an opportunity; it’s all a question of perspective. Shankara’s teaching is about cultivating the creative abilities of the mind by increasing our understanding of ourselves, of how we function, what our particular patterns of misunderstanding and repetition are and how to move beyond them. As I said, it’s a practical psychology. What I’ve done in the book is to present dozens of question and answer sessions taking place between Shankara and many different types of people, so as to provide answers to exactly these sorts of practical problems.

It seems we are at a crucial turning point in our evolutionary history. So many of our conventional ways of doing things are running into cul-de-sacs and there is general confusion about the best future direction. What is being demanded of us is a shift in planetary awareness, a new paradigm of who and what we are and what our true potential and purposes are. To guide the emergence of this higher paradigm, we don’t need the tired old religious forms, most of which are more or less corrupt, but a breakthrough to a new level of consciousness. This begins on the individual level and spreads to the collective; it has already begun and is manifesting in various ways. To help us make the transition, the teachings of enlightened sages such as Shankara are not only relevant, but indispensable. Hence the book.