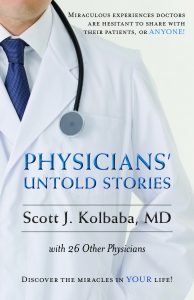 The following is a true story of a miracle. It is written by Dr. John A. Heitzler, MD and is an excerpt from the book Physicians’ Untold Stories: Miraculous Experiences Doctors are Hesitant to Share with their Patients or ANYONE!

My wife, Joan, was birthing our fifth child with her attending obstetrician, two nurses, and me in the delivery room, when a quiet, unassuming midwife, Johannah O’Hanlon, stepped in and, without saying a word, saved Joan’s life.

In order to understand the significance of this miracle, you need to know a little more about the background of this exceptional midwife. Johannah O’Hanlon was Joan’s grandmother. As a young lady, she and her two brothers were sent to the safety of the United States from Ireland by their father, Michael. Michael regularly skirmished with English soldiers, rode on horseback at midnight on illegal missions, and hid Catholic priests in secret rooms in his home. It was a time of great danger, and Michael feared for the lives of his family, particularly his special daughter, Johannah, who demonstrated remarkable charity to all the rebels who crossed their threshold in the dark of the night.

After immigrating to the United States, she lived with her uncles on a farm in Sterling, Illinois, until her new home could be constructed by her two brothers and her betrothed. When the home was completed, she married and moved into the bustling Irish community in Chicago. She gave birth to her first child, a son, who lived only six months and died of complications of pneumonia. She took in laundry for a time until after the birth of her second child, a daughter, Marie. When Marie was two, Grandma O’Hanlon became a midwife and stayed with her families for up to six weeks after a birth. She took Marie with her and tutored her when they were away from home. Marie became a beautiful young lady and found the love of her life, married, and moved into their own home in the Chicago suburbs.

Grandma O’Hanlon continued her service to others as a midwife, but, when her husband died in his sixties, the family encouraged her to move in with Marie, who now had a child of her own, Joan (my future wife). There, the love that Grandma O’Hanlon and Joan shared ultimately bonded them in a way that would overcome the boundaries of time and space. Joan often said that when she got into trouble with her mother, if she could make it to Grandma O’Hanlon’s lap, she’d be safe.

Grandma O’Hanlon continued to serve as a midwife, but, at the time, there was considerable prejudice against the Irish population in Chicago, so she was primarily involved with delivering babies in the Irish community on Chicago’s south side. If her service was needed and the family could not pay, she gladly worked for free. I remember one grateful family with very little money, but Grandma O’Hanlon was named in their will. The lot in Chicago near the Dan Ryan Expressway that she inherited after the couple died turned out to be very valuable.

Grandma rode the train into the city and got off near Madison Avenue. In those days, there were many homeless men on the streets, and she always had something for them. Her friends thought she was foolish to give money to the homeless because they would often use it to buy alcohol, but Grandma simply said that she did what God would want her to do, and what the men did with the money was up to them. She became a spiritual model for the entire family.

Joan’s fifth pregnancy proceeded uneventfully, and, when the ultrasound revealed that we were expecting another boy, we decided to name him Michael, after Grandma O’Hanlon’s father. She would like that.

Labor contractions started on March 14, and, on the fifteenth, the Ides of March, we went to the hospital. I called my partner, Dr. Michael Hussey, to do the delivery. With contractions coming closer and closer, Joan was moved to the delivery room where there was a flurry of activity to make sure their busiest obstetrician (me) would not be disappointed with his own team. I tried to maintain my role as husband and father and not participate as an obstetrician. Everything went well, and Joan delivered a healthy baby without anesthesia or pain medication. After the delivery, the routine in those days was to manually explore the uterus to make sure no part of the placenta was remaining. During that procedure, Joan began to experience considerable pain.

To lessen her pain during the procedure, Dr. Hussey suggested she be given the standard drug at the time, Trilene, which is administered by mask to induce a deep sleep. Joan hesitated to accept it because she did not want to become unconscious, but she finally agreed. As the nurse was about to put the mask over her face, Joan looked up and saw Grandma O’Hanlon, who had just come into the room and stood at the foot of her bed. She was dressed in her typical blue dress with tiny white polka dots and a gray knit sweater vest. Her hair was white and put up in a bun on the top of her head. She didn’t say a word but stood there, shaking her head, with her arm on her hip and a look of displeasure on her face. Joan realized immediately that her beloved grandmother did not want her to accept the anesthetic, so she pushed the mask away.

No one remembered that Joan had eaten a large meal before she went into labor, and two minutes after refusing the anesthesia, which would have put her into a deep sleep, she suddenly vomited the large meal. Had the mask been on her face, she could easily have choked and aspirated into her lungs, which could have killed her.

Grandma O’Hanlon, without saying a word, slipped out of the delivery room as quickly as she arrived, her mission complete, her presence unnoticed by anyone else in the room. Joan made it to the safety of her lap one more time, their unconditional love transcending all earthly bounds—because Grandma O’Hanlon had died twenty-two years before.