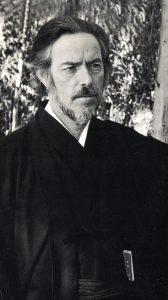 Below is an excerpt from Psychotherapy East & West by Alan Watts.

If Eastern cultures were less ego-conscious than Western, then Buddhist and Taoist texts would be relatively silent as to the illusory nature of the ego. Jung is therefore perfectly right in sounding a warning-but for the wrong reason. He assumes that a strong ego structure, a struggle against nature, is the necessary condition of civilization, and is thus in danger of reaching the same despair as Freud. But it is one thing to note that civilization as we know it has depended upon the ego concept; it is quite another to assert that it must, as if this convention were somehow in the nature of things. Freud and Jung are both fully alive to the interdependence of life ’s great opposites, but for both they constitute a finally insoluble problem. Freud fears that the tension between them must at least become unbearable; Jung seems prepared to walk the tightrope between them forever.

“Western culture generally [writes Maslow] rests on the Judaic-Christian theology. The United States particularly is dominated by the Puritan and pragmatic spirit which stresses work, struggle and striving, soberness and earnestness, and above all, purposefulness. Like any other social institution, science in general and psychology in particular is not exempt from these cultural climate and atmosphere effects. American psychology, by participation, is overpragmatic, over-Puritan, and overpurposeful. . . . No textbooks have chapters on fun and gaiety, on leisure and meditation, on loafing and puttering, on aimless, useless, and purposeless activity.

American psychology is busily occupying itself with only half of life to the neglect of the other — and perhaps more important — half.” In all directions we use the means of life to justify the ends: we read or go to concerts to improve our minds; we relax to improve our work; we worship God to improve our morals; we even get drunk in order to forget our worries. Everything that is done playfully, without ulterior motive and second thought, makes us feel guilty, and it is even widely believed that such unmotivated action is impossible. You must have a reason for what you do! But the statement is more of a command than an observation. As soon as the ego is divided from the world, like the effect from its cause, it seems to be the puppet of “motivations” which are really the disowned parts of ourselves. If we could see ourselves whole, as differing positions in the unified field of the world, we should see that we are unmotivated — for the whole floats freely and does not rest upon something beyond itself.

Thus the Existentialists are right in saying that nonbeing and death give being, a being, its authenticity. But anxiety is the repression of death, for whatever is repressed does not simply vanish from sight; it lurks in the corner of one’s eye as a perpetual distraction, and the center of vision and attention trembles because it cannot fully look away from it.

What amounts in Existentialism to an idealization of anxiety is surely no more than a survival of the Protestant notion that it is good to feel guilty, anxious, and serious. This is quite a different matter from admitting honestly that that is how one feels, thereby breaking the vicious circle of anxiety by ceasing to be anxious about being anxious. Allowed anxiety ceases to be anxiety, for the whole nature of anxiety is that it is a vicious circle. It is the frustration of not being able to have life without death, that is, of not being able to solve a nonsensical problem. As Freud saw, the ego is constituted by a repression of Eros and Thanatos, of life and death, and for this reason it is a parody of authentic individuality. And as Norman Brown goes on to show, repressed Thanatos turns itself outward as the desire to kill, as aggression; and, on the other hand, repressed Eros becomes a fixation to the past, to the search for satisfaction in the repetition of some primary experience of satisfaction. 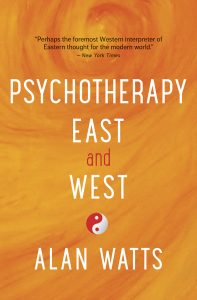 Life is renewed by death because it is again and again set free from what would otherwise become an insufferable burden of memory and monotony. Genuine reincarnation lies in the fact that whenever a child is born “I” — or human awareness — arises into the world again with memory wiped clean and the wonder of life restored. Everlasting annihilation is as nonsensical as everlasting individuality. And who can doubt that if human life has arisen in this tiny area of one immense galaxy, it must be happening again and again, on grounds of sheer probability, throughout the whole diffusion of nebulae that surrounds us. For where the organism is intelligent the environment also must be intelligent.

Alan Watts (6 January 1915 – 16 November 1973) was a British-born American philosopher, writer, speaker, and counterculture hero, best known as an interpreter of Asian philosophies for a Western audience. He wrote over 25 books and numerous articles weaving scientific knowledge into the teachings of Eastern and Western religion and philosophy, including Psychotherapy East & West.