The night was October 4th, 2014. I had just gotten home from a rehearsal with the band I was playing drums in at the time; The Sound of Ugly. On the surface, things were going really well for me: I was going on my second year of having my own recording studio, The Sound of Ugly was being picked up by a significant manager and planning a major music video, and I was building a hefty catalog of songs. And yet, something inside me was not at ease. I had come close to quitting the band a few times because it was feeling less and less like a real band. I was getting tired of putting in so many hours of work and feeling like I wasn’t getting anywhere. I had also reached a season where it felt like nothing I wrote was any good. Fortunately, the “work hard and something will eventually happen” mentality was still driving me, so I persisted. When I got home this night in October, I sat down to try and record just for fun; something I hadn’t done in a while. I started playing a riff I had kept in my back pocket for a couple years and decided to record it. I didn’t have a song structure or even a concept, but I knew I loved the riff; it had a Velvet Revolver feel to it. So I free-styled one take of the guitar, all the way through, feeling more and more excited each note I played. Immediately after the take, I began cutting up the parts and structuring the song. I decided to program a basic drum track before doubling the guitar, to enhance the feeling as I played. This was sounding good, the energy felt so refreshing.

One by one, the other pieces of the instrumental came together. I sat back with my headphones on, about four hours after the initial take, feeling very proud of what I heard. I tried free-styling a vocal take, just to see if any ideas came out. The basic rhythm for the verse and the basic melodies for the pre-chorus and chorus came out. I wanted to record the vocals so bad but it was too late and my parents were asleep in the next room. I decided to sleep on it. I awoke the next morning feeling even more excited about completing the song. I knew the main theme of the song was going to be something like, “Rise Above It All.”

I ran downstairs, prepped my usual morning cup-of-coffee, came back up and listened back. After a few edits on the instrumental, I began writing the lyrics. I felt myself channeling a perspective that felt like my dad; crafting the verse and pre-chorus as if it was a father-figure speaking to me. Lines like “Guess you know too much for your own good,” and “Don’t make me smack ya,” all had the tone of an adult figure to me, and I thought it was perfect symbolism of the internal struggle I was going through. And then the chorus came, “Rise, and live my friend… Lift your head and heart above it all. Rise, with hand in hand… We’ll rise above the world we know, we’ll rise above, we’ll rise above it all.” “…Awesome” I thought. A few more sips of coffee and I hit the record button.

It came quickly. Within another four hours, I had finished what I considered the “demo” vocals and bounced down the song. It was dope.It had the feeling I loved about Velvet Revolver’s song “Slither,” mixed with vocal harmonies and layers that reminded me of Nine Inch Nails. And with my rapping in the verses, I had channeled my inner Mike Shinoda (Linkin Park). I didn’t know it at the time, but I had just set the direction for what would become my debut EP. 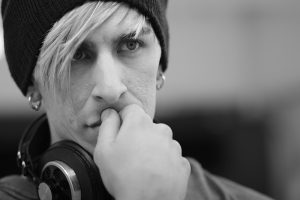 What the song is about:

Above It All represents the internal struggle we all face on a daily basis. Voices of our elders growing up, people we look up to and admire, and of course, our critics. All of these voices become absorbed into us as we live our lives, and eventually we begin mimicking them to ourselves; often the very things that upset or diminish us. Mix that in with this modern-day stimulation-saturated world, and suddenly we are in a constant state of self-doubt and indifference. This song was given to me when I was at one of my lowest points. A time where I felt completely defeated and uncertain that I would ever see my dreams of being a professional songwriter and performer come true. This song became my own mantra, that somehow, someway, I would rise above this. Everyone will rise above whatever it is that is interfering with the joy of their life experience.

About a year after recording the demo of Above It All, which actually became the final version on my EP, I was in preparation to shoot the music video for it. The music video became an even greater depiction of what the song means to me and the place I was in when I wrote it. Much of my struggle has been with knowing I have so many talents to offer the world, and trying to figure out how to blend them in a way that I enjoy, while still sharing them as openly as possible. I still face that inner-dialogue to this day. But now, I have a song that will always remind me what the simple and powerful answer to that question is.

********
For more information, you can visit www.trevanmusic.com