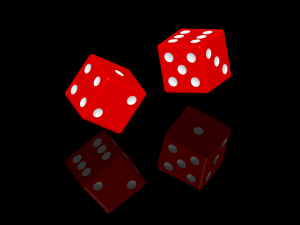 Before the mathematicians of the seventeenth century started to get their heads around probability, we had luck. The idea was that there was another world – a “spirit world” if you like – that informed what happened in our lives. It was this other world that meant that not everything that happened was by chance. There was an element of design in there too.

As the methods of early pioneers, like Sir Francis Bacon, became more popular, scientism went mainstream. Bacon insisted that the only way to know if your theory about the world was correct was to test it rigorously. That meant that everything else that was not amenable to science was left out in the cold.

The problems for those who believed in the spiritual dimension were twofold. The first issue was proving that there is a spiritual dimension to life. Proving that there is requires a scientific methodology. But the scientific methodology itself is set up to preclude spiritual interpretations. And the second problem is just how effective science has been in both theory and practice. The modern world is built on the knowledge gained by science, not spirituality.

If you go looking on the internet for how to improve your luck, you’ll find all sorts of way to improve your chances of being successful. But the methods that are recommended ignore any spiritual dimension of life.

When it comes to luck, they can’t recommend a magic spell to win lottery. All that they can suggest is that you buy more tickets to improve your odds. In other words, luck has become merely about probability in the mathematical sense. The universe is fundamentally random, and you’re just a part of that randomness. There isn’t, in other words, any scope for the idea that there is luck – something in the background that is skewing things in your favor.

As a result, an essential element of human existence is missing. Yes, spirituality can’t be used to develop new technology. But that’s because it’s operating on a fundamentally different level. The spirit world is outside of the normal realm of probability and doesn’t interact with our world according to standard laws of physics. Rather, the spirit world communicates with through different means.

The science of Bacon, Newton, and Einstein was dependent on the world running like clockwork. Einstein was famously in awe of just how regular and predictable the universe was. And when it comes to physical stuff, there is no doubt that it is. But the problem is that the primacy of the physical sciences has become a dogma. It now drives people towards itself and away from alternative explanations of the world. Science can’t disprove that those alternative explanations exist. And neither should it try.