The book 90 Days of Heat is an adventure recounting the 90 straight days of Moksha Hot Yoga David Matthew Brown went through to find inner peace after his divorce. David shares with you 90 days of thoughts, inspirations, and his personal journey to peace through hot yoga. Here are selected insights from the book.

November 26th, 2010, and I had recently been separated from my wife and received a call from my Uncle Paul. “Hey, David, it’s your uncle, congratulations you won a prize, give me a call, okay, bye.”

My uncle has a wonderful sense of humor, so I called him back, and he explained that he, my aunt, and cousins were going skydiving the day after Thanksgiving and they would like me to go. I had never thought in my wildest dreams that first I would be going through a divorce, and second jumping out of an airplane, so I said, “Yes.” What else could happen? So my almost three-year-old daughter and I drove down to a small airport by San Diego. As we arrived my daughter saw all the little planes, and asked what we were doing there, and I responded, “Well, Harper, your dad is going to jump out of plane?”
“Who‘s going to watch me?” she asked.

I smiled. “My aunt will watch you.”

My uncle and aunt arrived, I was chosen to go first, and my heart was pounding, and my mind was dancing in fear. What am I doing? This is nuts. I would be jumping tandem. The man I was jumping with must have reassured me one hundred times. The plane was tiny. On board would be a pilot, myself, the man I would be strapped to, and another man and jumper; five of us traveling in a tuna can, puttering up two miles high. The higher we flew, the more my mind started to race, and finally we arrived, hovering above the Pacific Ocean.

It was beautiful up there and I watched the other jumper sit on the edge of the plane, and then go. And after they jumped I heard, “Okay, David, we have to jump now, let‘s go.” So we moved to the edge of plane, and I sat with my feet dangling over the edge. I heard directions being spoken to me, my mind screaming now, and like that, we jumped. All was quiet in me as we moved through the air, and I opened my eyes and looked out over the vast sky and down at the wonderful greens and browns of the fall season below me. I signaled thumbs up to the camera that was on me, and said, “Wow,” about fifty times. No words can describe the feeling of being up there.

We all decided to go for Mexican food. Harper and I jumped into my car and followed behind my uncle. Out of the blue, our car just gave up. Smoke billowed from the hood. My daughter asked me, “Dad, why is the car on fire?”

We hopped in my uncle’s car. As we drove back to their house I remember thinking about my separation, moving out of the house, jumping out of plane, and then the thought came, Now this. At that moment, it felt as if life kept giving me lemons. Over the next few months I would be mugged, become a caregiver, and endure family members that couldn’t keep themselves out of the mediation between my wife and me. My Facebook became a posting ground of nonsense, from people who had no idea or sensitivity to divorce. The divorce felt like the wind being knocked out of me, it really hurt, was painful, and I began to turn away from the world. I wanted to stay inside. I worked many jobs, and did the best I could to keep a positive outlook at work. It was difficult.

After many meetings, therapy sessions, energy sessions, massages, and seeing my life from all different vantage points, I came across Radical Forgiveness by Colin Tipping. It was here that I started to feel a sense of relief. After I did his worksheet I noticed a weight being lifted. Finally after three years of resentment, there was actual movement happening. Actual forgiveness. 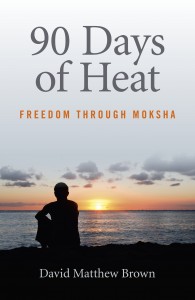 I remember getting in my car to run errands around Los Angeles, and I felt as though I was renewed. I thought what could I do to mark this new beginning. As the thought appeared, I looked to my right and saw the sign, “Moksha Yoga,” which was hot yoga. I thought to myself, now that’s interesting, I haven’t done yoga for three years. So I sat with the idea, but the idea didn’t want to sit, it wanted to move, take action. As I had just started writing a blog, I thought it would be fun to do thirty straight days of hot yoga and blog on my experience every day. I would blog about my insights, struggles, and inspiration on the mat and how it was affecting me off the mat.

I used to believe vulnerability was weakness, but not anymore. Vulnerability is strength. By writing every day about my journey on the mat, I stayed open – stayed in the state of vulnerability – because what I learned on this 90 days of hot yoga is that life is not about holding on to anything, it flows no matter what. We are here to accept it, and then take action from the place of acceptance. I spent most of my life on this planet resisting, then proving others wrong, and then searching for approval: an unhealthy approach that worked for many years, but finally failed.

So you may be in a place right now where everything is going in the opposite direction to where you would like it to go. Take breath, and accept it. Accept where you are now. Accept the feelings, thoughts, and sensations that are happening inside you and be one with them. They are your real teachers. Witness them. Because if they are happening inside you, own it, they are your feelings. You matter, so your feelings matter.Take your time with this journey. Remember you are already here, so be here fully, breathe, and enjoy!