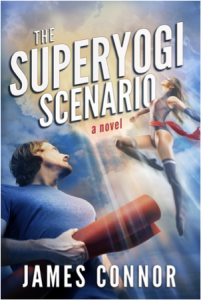 Below is an excerpt from THE SUPERYOGI SCENARIO, a novel by JAMES CONNOR

ARIAL DAVIS TOOK ERIC TO THE QUIETEST ROOM THE small complex had to offer. Closing the door behind her, she said, “We’ll have to do it in here.” Immediate regret followed her choice of words. “You know—whatever we’re going to do.”

Eric spotted a burgundy-colored meditation cushion in the corner, the kind filled with barley husks that sounded like a bean-bag when touched. Trying to break the ice, he asked, “You’ve been meditating regularly?”

“I have.” She practically clicked her heels. “That Yoga Sutra course in New York changed my life. Otherwise, I wouldn’t have known that yoga was originally a path of meditation.”

Already reminiscing in his mind, Eric nodded. It had been a difficult time in his life: his SEAL career had ended, he had been bound to a wheelchair, and his fiancée had left him. Even the pop of a car backfiring in the street triggered flashbacks.

Like most students at that teaching, Eric and Arial were asana practitioners looking to go deeper. They wanted the deepest questions about life and reality answered—but Eric, perhaps more so than any others in the room, really needed it.

When Eric had rolled his wheelchair into the crowded, posh yoga studio just south of bustling Union Square in Manhattan, he wasn’t sure what to expect. The course he had traveled across the country to attend wasn’t just an ordinary teaching, but an historic event. It was probably the first time—maybe in a thousand years—where heavyweight Buddhist lamas and hardcore yogis had gone through Master Patanjali’s Yoga Sutra together using recently recovered texts (long preserved in Tibet) to clarify how someone like Eric could travel the yogic path to enlightenment.

Feeling nervous and out of place, Eric had even bumped his wheels into a wooden stand, knocking over yoga mats with a loud thwack. Arial had been the first to help him. Restacking mats, she introduced herself.

Before this teaching, Eric and Arial knew some Sanskrit philosophy words like purusha and prakirti, and like good yogis, they knew how to make traditional chai and how to use a neti pot for cleansing the nose. And of course, Arial could stand on her head. But they had little idea how to practice the higher stages of Master Patanjali’s famous eight limbs of yoga beyond the third limb of asana, the physical exercises.

Arial never forgot the biggest surprise from the first night of teachings: traditionally, yoga was more about meditation than the physical exercises. To Arial, this revelation felt like learning that raspberries, blackberries, and strawberries were not true berries, but aggregate fruits. Yet, Arial found ample proof once she actually started studying The Yoga Sutra.

When she counted the 195 verses in The Yoga Sutra, only three verses dealt with asana—less than 2%. Both Arial and Eric quickly realized that taking physical poses to be a complete yogic path—while ignoring the seven additional limbs of yoga—was a great distortion. It was like taking bar stretching to be ballet.

This was a welcomed relief to Eric. There were too many poses that he would never be able to do from his wheelchair. And if that was what it took to reach enlightenment, then Eric Adams had already been ruled out.

“That course changed my life too,” Eric said, smiling.

“I can see that!” Arial looked him up and down to communicate that she was talking about his healed body—but once again, she wished she could take it back.

“Once I started seriously meditating and studying more root texts….” Eric hesitated. “Well, let’s just say there’s a lot for us to talk about.”

Eric’s studies had taken him on a most unexpected journey. He believed the transformations Master Patanjali outlined in The Yoga Sutra almost two millennia ago were still achievable for an ordinary westerner like himself. And long retreat had proved him right.

The roar of an F-22 Raptor taking off the runway pulled Arial’s attention. “Concentration is my edge in the sky,” Arial said, starting to open up. “Everyone here has great reflexes and the balls to really push the envelope. You need a three hundred knot mind to fly jets. But meditation gives me an advantage. On my best days, I’ve got a six hundred knot mind.”

They fell into another awkward silence. Eric still hadn’t explained what they were supposed to be doing and why. Eric cleared his throat. “So, we’re going to focus mainly on meditation to push your wisdom.”

Arial turned around. Her hands leaned against the windowsill. “I’ve been working for years on the emptiness meditations we got from those lamas. But they’re really difficult.” Sliding into her Texas drawl, Arial said, “Every time I think I’ve got it, it just slips away like a greased pig.”

Eric smiled. Meditating on the illusory nature of reality was difficult for anyone accustomed to thinking things are as they appear.

Arial wanted to ask him about his remarkable recovery, but other questions came first. “Eric, I’m just going to say it: this is weird. What’s this all about? And why me?”

Eric stiffened, wondering how to explain. What’s the warm-up for “I’m here to teach you how to fly without a machine?”

***********
James Connor recently completed a three-year meditation retreat in the mountains of Arizona. The Superyogi Scenario is available at all major booksellers and Amazon.com.

Author Bio:
James Connor is the author of The Superyogi Scenario. James began writing supernatural thrillers when he won a Raven Society Award at the University of Virginia in support of his creative writing. But it wasn’t until two decades later, after completing a three-year isolated meditation and yoga retreat in the high-desert mountains of Arizona, that James felt compelled to publish stories to allow readers to experience deep wisdom gained from his fifteen years of detailed Buddhist and yoga training.

Novel Description:
The Superyogi Scenario is a fresh new take on the superhero story that packs a philosophical punch. Instead of getting supernatural powers from radiation or spider bites, powers are developed through yoga and meditation.