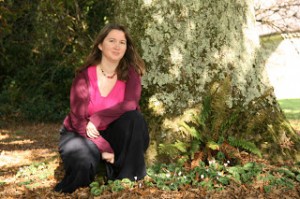 Lynn V. Andrews, celebrated author and shaman, introduced the idea of the Creative Rainbow Woman to Western women in her third book, Jaguar Woman, published in 1985 and elucidated the concept further in a 2005 article in The Meta Arts magazine.

Andrews, who identifies herself with the Creative Rainbow Woman archetype, refers to the two mothering archetypes as the “Ecstatic Rainbow Mother” and the “Nurturing Earth Mother”.

Each of these has her shadow side or opposite face, like a yin and yang. These are described as four energy hoops or archetypes, which can be imagined as two double-headed arrows overlapping to make a cross. Rainbow Mother’s dark side is “Crazy Woman” and Earth Mother’s is “Death Mother”.

The Rainbow Mother is often perceived, either in her own mind, or those of others, as a misfit. A dreamer and creatrix, she is always fluttering like a butterfly from one project to another, always trying new things. She regularly needs to descend into her creative depths, bringing visions between the physical world and the dream-time.

The ecstatic Rainbow Mother is the energy of the poet, the dancer, the weaver and the Seer. Artists are intimate with Rainbow Mother, for she is their muse. And she is completely misunderstood in our society, a world that does not support its artists, its writers and thinkers. She wants to dream and inspire people to health and wellbeing, and routine wilts her. – Lynn Andrews, The Meta Arts magazine

A Creative Rainbow Mother’s home, despite her often being a real home-body, tends to reflect her abundant yet chaotic approach to life – with half-finished projects, creative materials and inspiration, and mess, all around her. She does not prioritize housework over soul work! Not for her the routines of the Earth Mother, nor the consistency which society tells her she must provide for her children in order to be a good mother.

Whilst the Nurturing Mother finds immense comfort, safety and satisfaction in marriage, domesticity, growing food and children, and enjoys order around her, the Creative Rainbow Mother regularly feels the need to fly free. And the truth is that she is a divided soul. Her home and family, despite her great love for them, usually come second in her heart. Her spirit follows a different calling, often her art, but sometimes another career, which is, if she is honest with herself, the most important thing in her life. But she needs her home, her partner and children to help her to ground her energy and keep her in this world – and so there is a constant tension built into her relationships.

Of course I hate labels and stereotypes as much as the next creative individual. I am sure that each woman has a degree of Earth and Rainbow mother in her, just as I am sure that there must be other mother ‘types’ omitted from this dichotomy. After all, none of us is a one-dimensional being. We all hold many archetypes, or energy patterns associated with different characters, within us: Mother, Lover, Virgin, Fool, Wise Woman, Student, Teacher, Artist…which can teach us more about the aspects of our personalities that we need insight and guidance in.

When we use archetypes as a tool in this way, often the patterns of our character and unconscious behavior which previously baffled us fall into relief. This is the gift of archetypes: to allow us momentary detachment from our individuality, in order to see ourselves more clearly. 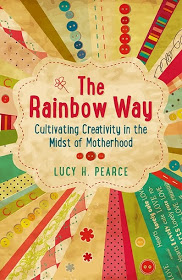 se on the south coast of Ireland. She is an established writer, editor, artist, women’s workshop facilitator and mother of three young children (aged 8, 5, and 3). The Rainbow Way is her fourth book. Her earlier titles (Moon Time; Reaching for the Moon and Moods of Motherhood) have been described as “life changing” by women around the world.

She is the contributing editor and columnist at JUNO magazine.

Her blog, Dreaming Aloud (www.dreamingaloud.net) (named after her JUNO column) was established late in 2010. Shortlisted for the Irish Blog Awards, it has developed a devoted following of creative mothers.