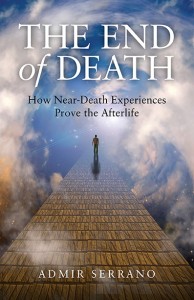 From the book The End of Death, by Admir Serrano

“I was admitted to the hospital with heart trouble, and the next morning, lying in the hospital bed, I began to have a very severe pain in my chest. I pushed the button beside the bed to call the nurses, and they came in and started working on me. I was quite uncomfortable lying on my back so I turned over, and as I did I quit breathing and my heart stopped beating. Just then, I heard the nurses shout, ‘Code pink! Code pink!’ As they were saying this, I could feel myself moving out of my body and sliding down between the mattress and the rail on the side of the bed—actually it seemed as if I went through the rail—on down to the floor. Then, I started rising upward, slowly.

On my way up, I saw more nurses come running into the room—there must have been a dozen of them. My doctor happened to be making his rounds in the hospital so they called him and I saw him come in, too. I thought, ‘I wonder what he’s doing here.’ I drifted on up past the light fixture—I saw it from the side and very distinctly—and then I stopped, floating right below the ceiling, looking down. I felt almost as though I were a piece of paper that someone had blown up to the ceiling. I watched them reviving me from up there! My body was lying down there stretched out on the bed, in plain view, and they were all standing around it. I heard one say, ‘Oh, my God! She’s gone!’ while another one leaned down to give me mouth-to-mouth resuscitation. I was looking at the back of her head while she did this. I’ll never forget the way her hair looked; it was cut kind of short. Just then, I saw them roll this machine in there, and they put the shocks on my chest. When they did, I saw my whole body just jump right up off the bed, and I heard every bone in my body crack and pop. It was the most awful thing! As I saw them below beating on my chest and rubbing my arms and legs, I thought, ‘Why are they going to so much trouble? I am just fine now.’”

You may have noticed by this account what I mean when I say that our consciousness is not locked up in the brain like a bird in a cage. When this lady was physically conscious her locus of consciousness was in her physical head, indeed manifested through the brain. However, as the heart and the brain quit their normal functioning, her consciousness along with her spirit body slipped out, intact, and continued their independent existence, without the need of—in fact, better without!—a physical apparatus. If you had been one of those attending nurses and had psychic vision, this is what you would have seen when the woman turned to her side, stopped breathing, and felt herself leaving the body.Around the head, you would see a mist-like substance gathering, shapeless at first, and then coming into form. In a few seconds, you would have seen the shape of a new head—face, eyes, nose and all! This was the moment when the woman said, “I could feel myself moving out of my body.” Seconds later, astounded and with your jaw dropping again, you would have seen an entire new body exiting the physical counterpart. You would have seen it sliding down between the mattress and the rail—metal rail, for that matter—moving out with ease and grace and in the most absolute freedom as material objects were no longer barriers to the spirit body.

No longer bound by the law of gravity, rather than forcibly pulled to the center of the earth, as a physical body would be, it rose up, lightly and gently, as a delicate feather floating in a soft breeze. At this moment, something would draw your attention. As you stared at the spirit body floating above you, you would see a remarkable resemblance to the physical counterpart, with some enhancements. You would see, for example, smoother skin, a younger looking face, brighter perfect teeth, and a suppler constitution to name a few visible differences. She could have emerged to the non-physical reality dressed in a similar garment as the physical body she was leaving, but of a finer, silk-like material, or the same way, as a baby, she emerged to the physical world—naked as a jaybird. But regardless of what covered the new body, if anything, you would be certain it had a connection to the body lying dead on the hospital bed. Somehow, they were related.

If a departed loved one were to appear to you, this is how you would recognize her or him—by the appearance of their last earthly incarnation, one that you would recognize. As you glanced between the two bodies to make further comparisons, you would notice something you had seen before, but thicker now. You would see, connecting both bodies, a ropelike energy cord—the silver cord—attached to the forehead, throat or stomach of the physical body, and to the back of the head of the spirit body. Paying closer attention to the cord, you could tell it was not static. It seemed to pulsate as energy from the spirit body ran to the physical to keep it whole.

When I asked Celi to tell me what she had seen in the ICU while out of her body, there was more than the body lying in bed with tubes and cables connected to monitors. In fact, she caught me by surprise. Asking about it had not even crossed my mind, since it is something nearly unheard of in NDE accounts, with rare exceptions.

“What else drew your attention?” I asked.
“The cord,” she replied.
Since this was precious information, I pretended I did not know what she was referring to.
“On the monitors?”
“No, there was a cord attached to the body that came to my direction. To the back of my head, I think.”
“How was this cord?”
“Like a rope, sort of.”
“Was there a color to it?”
“Silverish like.” 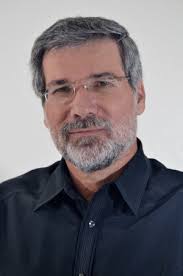 Since our floating woman had not moved too far out, and if you as a nurse would go back in time to assist the physical birth of this person, you would see that the silver cord resembled the baby’s umbilical cord. And this would take you to a startling conclusion—death and birth are similar events with opposing destinations. The child whose birth you had assisted hailed from the spirit world and through her mother grew a physical body to experiment life on earth. When her job on earth was done, as you witnessed the death of her physical body, you saw the spirit body emerge from the physical—umbilical cord and all—to return to the spiritual dimension again, our true home.