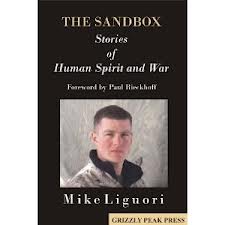 Below is a Q&A with Mike Liguori, Author The Sandbox Stories of Human Spirit and War.

1. How long did you serve in the Marines and where did you travel?

I served four years active duty. I was stationed in Okinawa, Japan for a year followed by two years at Camp Pendleton, CA.

2. Tell me about Iraq. What was the training like for it? And what was it like when you landed there?

Iraq was one of the most challenging events I have ever experienced. The training was rigorous, more mental, preparing our unit for long hours driving all over Al Anbar province. I thought initially war was something like the movie “Black Hawk Down.” I thought it would be landing in the middle of nowhere and we’d have to have other units protecting us while we were leaving the plane. When we landed in country, I was scared since it was unknown what it was like. But when I find out we were landing on an air base on a runway and we were going to walk with our gear to a small bus, it was kind of a letdown since I figured all that training was going to apply from day one. The training did apply (to the convoys) but you always learn more when you actually get “thrown into the fire.”

3. What was the one thing you took away from your deployments?

One of the things that really strikes me now that I look back on all my experiences is that I learned what family meant, what it meant to experience all the tragedies of war and know that through it all, there was a unit of men and women who were in the same boat as you were.

4. In 2006, you were honorably discharged from the Marines. What was the transition like coming out of the service back into the civilian world?

After my two tours in Iraq, I decided it was time for me to reenter the civilian world again. While I was in the service, I thought being back out in the “real world” was going to be a walk in the park. But when it was my last day in the service, doubt set in. Despite being literally battle tested, I felt I was leaving one war zone being Iraq and reentering another one.

5. You mention being recalled back to service during the President Bush troop surge and that was when you knew something wasn’t right mentally. Did you know what Post-Traumatic Stress Syndrome (PTSD) was and think that you had it?

Everything I was ever told in the military about PTSD was made out to be a weakness. My command told me that we shouldn’t be using it as an excuse to get out of another deployment even if we had it. So I just ended up thinking I wasn’t going to have that “chink in the armor.” However, when my father read to me over the phone that I had been recalled back, it was a nightmare that had come true. I was scared, fearful, and full of adrenaline, anxiety, and a cocktail of human emotion. I stayed in my house for a couple weeks, worrying and fearing for my life. It almost felt like Iraq would never escape me no matter where I was.

6. Why did you write this book?

I started writing this book during my sophomore year in college. I just quit playing football and it became a new project for me. I always wanted to write a book so I just started typing away. I wrote every single memory I had, stories I had heard, events I had experienced, and every single thing I could possibly remember. Once I started writing, I couldn’t stop. One hour turned into four hours turned into eight hours a day. I had finished the foundation of the book within six months.

7. This book was the first time you told anyone of your experiences in war and coming home. What made writing those experiences easier than talking to someone?

Writing allows you to pen thoughts down that may not be so easy to express verbally. I was able to chronicle experiences, describe certain details about those stories. To me, writing came so easy. I didn’t have an immediate response or feedback like you do when you are in therapy. I could write without any judgment and I was able to share those experiences when I was ready rather than when you talk to someone, there is an expectation to tell them everything in person. I wasn’t ready to show them every detail that the book entails. I think writing this book became therapeutic and empowered me to keep on pushing through everything I was going through at the time.

8. At the end of the book, you recount your suicide attempt and talk about an intervention that happened right as you were about to go through with it. What was the intervention?

During my attempt, I had planned to cut myself with a knife. When I decided that I was going to go through with it, I walked over to the knife drawer in my kitchen and opened it. Right when I was about to reach for one, my house was extremely quiet. I felt a light coat around me and what felt like a pair of hands. There was no one home but me. A voice in my ear calmly whispered to me to “put the knife down, son. It is not your time to go.” In that moment, all my thoughts of war and harming myself went away. I shut the drawer as hard as I could and cried. I never had cried like that in my life. I firmly believe that at my darkest hour, God had intervened and saved me from myself.

9. You say you feel more alive than ever before. Would you attribute that to your attempt or more so the journey you are on?

I would say it’s a combination of both, not one being more than the other. The overall journey I had been on since I first served in Iraq led to the best of times, the worst of times and the moments now where I look back at those experiences as the ultimate lessons in learning about life and myself.

10. If you could tell everyone one thing about mental health, what would it be?

Don’t be afraid to talk and share what’s troubling you. There are resources and people out there who want to help.

11. You mention that a newfound spirituality has helped you to heal. Can you elaborate?

I grew up a practicing Christian but when I encountered my first combat experience, something changed inside of me. In the book, I say, “What I experienced was more concrete than believing in God whom I have never seen or felt” because at that time, I felt that maybe it was the training and the Marines that had kept me alive that night, not a supernatural force. Now looking back, with the attempt and the journey I had been on, my newfound spirituality came from experiencing God at my darkest hour. From that experience, I found peace in serving other veterans and helping those who need it. It created my belief that we all have a purpose to help one another and to enjoy life the way it was intended.

12. How do you think your story can help others?

I think my story shows others that no matter how bad things can get or whatever your situation, you’ve got to keep on pushing through. Things always get worse before they get better and I think my story from war to coming home will help veterans and their families understand that help is out there and you can be successful out of the service. You’ve just got to believe you can do it no matter what.

13. What was your biggest fear in combat?

My biggest fear in combat was that my life was destined to end, dead, in a combat zone, that I wouldn’t have a chance to say good bye to my family and loved ones. Even though being a marine means going to war and death is a possible consequence that you had to accept, I feared that I would end up being a name on a memorial or a tombstone in a cemetery.

14. What was one of your best memories from Iraq?

One of my best memories was waking up every morning to walk to breakfast at the chow hall before we left on our convoys. The mornings were pretty quiet and at that time, you could collect your thoughts, think about your life and wish you were home with your family. I enjoyed breathing the crisp air during the early mornings. It was my time to enjoy some quiet time alone.

15. If there was only one thing people could take away from the book what would it be?

Life is all about the journey. There will be times that you wish you never went through it but everything happens to teach you a lesson. There will be times where the best moments possible will be captured in pure bliss and those result from lessons you have learned. No matter what, we are all on our own unique journeys so enjoy the time you have in this life regardless of the moments.