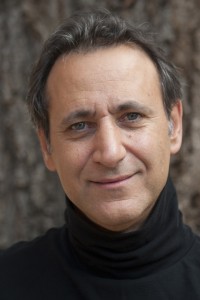 David Bedrick JD, Dipl. PW is the author of Talking Back to Dr. Phil: Alternatives to Mainstream Psychology

. Below is a Q&A I did with him about his book…

1. Why did you write “Talking Back to Dr. Phil: Alternatives to Mainstream Psychology?”

Everyone practices psychology- whenever we self reflect or try to understand another person or group. However, our psychology is incredibly limited often offering unsustainable solutions that neglect the depth and meaning of people’s deeper experiences. But there is incredible power, beauty, intelligence, and spirit in people’s subjectivity that should be the province of psychology. I wrote the book call into question our current paradigm and to change that paradigm to one that respects and believes in people.

2. Why do you think we need alternatives to mainstream psychology and what are those alternatives?

There are two main reasons. First, as I indicated above, there is profound meaning in people’s experiences. We need a psychology that believes in and works toward that depth and offers the skills and techniques to reveal that depth of meaning.

Second, we need alternatives that account for the social factors that impact individual’s difficulties and suffering. Psychology has too often taken the symptoms experienced by individuals and looked for causes that exist entirely in the individual. However, it is clear that individual women and men experience certain symptoms because of gender biases; black and whites experience symptoms because of racial biases; gays and straights experience symptoms because of heterosexual biases. For example, a woman who feels ashamed of her body is impacted by a culture that objectifies and criticizes women’s bodies and shames them for not fitting a narrow mold. If we reduce that problem to self-esteem, say, we neglect to address the social prejudices that lurk in the background. At worst, we hold individuals accountable for factors that are social.

3. How would you use alternatives to mainstream psychology to treat someone who has been hospitalized with a chronic mental illness such as schizophrenia, severe depression or bipolar disorder?

While I have been trained to work with people who are in extreme states (a term used to describe people in the states you refer to- a term that is less likely to label and shame the individual), I am not an expert in the practice of working with extreme states. I mostly focus on people who have come out of these states and want to address the longer term process or recovery from these difficulties.

That said, I have worked with folks who had been hospitalized for severe depression and psychotic breaks. While each person is different, the most important thing is to help the person access the difficult experience they had in their extreme state in order to help them unfold that experience further. This is done over time in order to mine the gifts and gold in these experiences and then help the person integrate those experiences- make them useful to the person in their lives. Some of these states may have profound trauma in the background that needs to be processed; other states have potential gifts in them – gifts that are “extra-ordinary” and therefore difficult to access in “normal” life. In that case I help the person integrate those gifts into their “normal” lives.

I have worked with some people in the midst of an extreme state. In these cases my approach, the approach of Process-oriented Psychology, is to join the person in the state they are in, make a relationship with a person, and see if the experience can be unfolded to the point that the person shifts or that some meaning for the state begins to be revealed.

Actually, psychology was my first love. I studied organizational psychology at the University of Minnesota, drama therapy, hospice treatment, abuse work, and mindfulness approaches to psychological trauma in my early career. Later, in 1992, I began studying Process-oriented psychology with Dr. Arnold Mindell. I moved to Oregon to study with the Process Work Institute and began dreaming (at night) of going to law school. Deciding to take these dreams more literal than most, I applied to law school, was accepted on scholarship, and began studying law and psychology in 1995. The overlap in these two disciplines arose because of my interest in democracy and justice. My psychological paradigm has always centered on the difficulties caused by marginalization – the oppression, suppression, or denial of groups of people or certain experiences of individuals. I found the law to be one model and approach, especially constitutional law, to perfecting our democracy and addressing injustice.

5. How has your work as an attorney helped you as a counselor?

I have always loved bridging different disciplines, for example: poetry and social justice or mathematics, physics and psychology. Bridging disciplines forces me to think outside the box and allows me to find common substrates that are perhaps deeper and more immutable.

In addition, the legal system is built on addressing polarizations- problems where there are two distinct sides in conflict that is not easily resolved. Psychological difficulties often begin with the basic dilemma- a person has two different “parts,” as it were, that are not in agreement. One side is often so dominant that it marginalizes the other leaving it to cause unconscious difficulties and show up in nighttime dreams. The law provides one paradigm- a paradigm of defending both sides and giving a kind of “free-speech” to both- that is sometimes useful in helping people psychologically.

Further, much of my “practice” of psychology has taken place in the classroom – educating people by introducing them to alternative paradigms. Studying and practicing law has made me a more potent and fierce educator.

No, I am not currently practicing law. While I was doing both, my creative life/writing life suffered. I moved from Oregon to Santa Fe, New Mexico three years ago, stopped practicing law, and completed by first book. I also blog for Psychology Today and am working on new essays for my next book.

Psychology can do so much more for people than it does. It can stop labeling and exploring the reason people are disturbed, often labeling them sick in the process, and stay truer to its roots – psyche and soul. Psychology can help individuals bring out their greatest gifts and purpose as well as help groups and nations resolve our most intractable conflicts. It can offer new perspectives on political polarization. It can help us all feel more human and give us a chance to develop a deeper capacity to form relationships and to love. 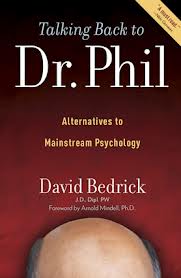 David Bedrick JD, Dipl. PW, spent eight years on the faculty of the University of Phoenix and taught courses for the US Navy, 3M, the American Society of Training and Development, the Process Work Institute, and psychological associations. An expert in mediation and conflict resolution, Bedrick blogs for Psychology Today and has received numerous awards for teaching, employee development and legal services to the community. He is the author of TALKING BACK TO DR. PHIL: Alternatives to Mainstream Psychology (Belly Song Press; February 2013; $17.95).