Bonsai People is an emotionally compelling documentary film that explores the work and vision of Nobel Peace Prize winner Muhammad Yunus. As the founder of Grameen Bank, Yunus pioneered microcredit, the innovative banking program that provides poor people – mainly women – with small loans they use to launch businesses and lift their families out of poverty. In the past thirty years, microcredit has spread to every continent and benefited over 100 million families. His Grameen Bank currently lends to one out of every 1,000 people on earth and with a 98% rate of return – unheard of in the financial world.

I recently had the chance to interview the producer of Bonsai People, Holly Mosher, about her documentary. Below is the transcript of our interview.

1. Why did you make Bonsai People?

I was inspired to make this film when I read that Muhammad Yunus and the Grameen Bank won the Nobel Peace Prize. My curiosity was piqued because here were an economist and a bank getting the Peace prize, not the prize for economics, and they were helping 6.5 million women, which I realized was 1 out of every 1,000 on earth!

2. How did you get interested in the subject matter?

The article on the Nobel Peace Prize was enough to send me packing my bags and heading to Bangladesh to see this work for myself. Both of the films I have directed were a direct result of reading an article in the newspaper or a magazine and then just having that idea stick with me and move me to create a film.

3. The Grameen Bank currently lends to one out of every 1,000 people on earth and with a 98% rate of return – unheard of in the financial world. Why do you think the return rate is so high?

I believe their success rate is so high because they have consistently listened to the people they are working with and adapted as a result. They used to lend to groups, but now lend to individuals. They are also flexible when people start to have problems paying back a loan. They work with them to find a payment term that will work for them. We could have used this methodology with our housing crisis to keep people in their homes, and I find it sad that we did not. Everyone wants to pay off their debt and is trying their best, sometimes the structure of repayment needs to be adjusted to fit the situation. They also realized that most people who can’t pay back, have a health issue in the family, so that is why they created Grameen Kalyan (Grameen Healthcare), because they realized they needed to address the difficulty in getting good healthcare in rural Bangladesh.

4. What sort of reaction have you received from people who watched Bonsai People?

I am happy to hear that this work is inspiring other people to believe in social business and want to expand it both here at home and around the world. Audiences walk away feeling empowered that they, too, can do something with their lives and make an impact on those around them. 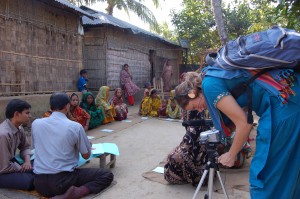 5. What were some of the challenging parts of making the film?

It was very difficult to come from the US and understand the culture of Bangladesh. It was hard to witness the women being so shy to talk to strangers and not feel that they could speak up for themselves. However it was very rewarding to see that as people worked with the bank, their confidence grew and they were on their way to a more equal relationship within their family structure. I came back appreciating what our grandmothers fought for over here and the freedom we have as women. But it also made me want to fight harder for women’s rights around the globe.

The other challenge was that Bangladesh really has it’s battle against nature. My filming would often be put on hold because of flooding or cyclones. It really disrupts people’s lives. My heart went out to the people of Bangladesh that they have this constant battle with nature, whereas I could come back here and get away from it. They really have such a strength and determination to keep picking themselves up after so much continually gets washed away. They are also one of the first countries to be hit by global climate change.

6. What were some of the most rewarding parts of making Bonsai People?

The rewarding parts were seeing the progress with the borrowers of the bank – seeing them improve their homes, their food intake, the courage they gained. I could see progress each time I came back. I also was so excited by the idea of social business that it has made me a big advocate of it here at home. We are now bringing the Social Business and Microcredit Forums to the US. There will be forums in North Carolina, DC and Oregon this fall, so that students in the US can find business solutions to local problems.

He is such an inspiration and I have so much admiration for his tireless work. I was surprised when I happened to run into him in the hall on my first visit to Bangladesh. He actually came over to me and said hello. I was in complete shock because he had just received the Nobel Peace Prize, yet was taking the time away from his group to greet me, when I didn’t have an appointment. I knew then that he was someone special. And now since I’ve been touring with the film, I am always amazed when I hear his touring schedule. At the age of 73, he has more energy than I do. He has 4 passports full of entry and exit stamps because he’s endlessly going around the globe sharing the work he is doing with social business so that the movement can really take hold.

8. What was it like filming “the borrowers”? Can you talk a little bit about them? For example, what were some of the most inspiring stories or anecdotes you heard from them? And, what was their reaction to your film? 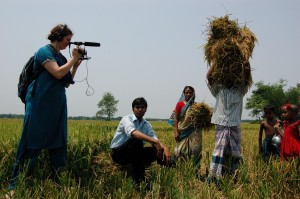 First off, it was heartbreaking to meet Shahnaj when she had just lost her son to tetanus from stepping on a chicken bone. It made me see the precariousness of life in a remote area, with little access to healthcare. This was a situation that would have never happened here. I also felt for her, as she struggled through the storm with a leaky roof. In the first few years, until they have built up their savings accounts, they really are at the mercy of any natural disaster, health issue or business problem. They have really hard choices to make about where to allocate those first profits. They are starting out with conditions that we can’t even fathom. It was only the day I went to film during the rain that I saw that her thatched roof left them completely soaked in a storm. And as a result her baby was sniffling and her husband had a fever. It was heartbreaking to see their real living conditions. But then it was great to see that after a couple of years, they were able to invest in a new roof and were doing well.

They were so happy to see me when I came back to visit and show them what I had filmed of them. They were thrilled that I remembered them all and was taking the time to see them again.

9. Where can we get a copy of Bonsai People?

You can get a copy from my website http://bonsaimovie.com, or you can see it on American Public Television or from Amazon streaming.

I hope people see the film and see that it really is possible to combine their desire to make the world a better place with their work. We can get rid of this mindset where something is either non-profit or for profit, and out for only the interest of benefiting the owners of the company. If we can bring the selflessness we all have into our work environment, we can create this new business model that benefits society.