“Finding Joe” is a documentary that interviews visionaries from a wide variety of fields on how Joseph Campbell’s teachings on ‘following your bliss’ and ‘The Hero’s Journey’ can be applied to our everyday life, including our challenges and personal dragons. The movie has become so popular that even President Barack Obama requested a screener of the film.

While most inspirational documentaries focus on how good life can be if you get everything you want; “Finding Joe” stands out because it interviews real life people ranging from Deepak Chopra, Tony Hawk, to Rashida Jones about how their struggles, failures, and personal dragons were necessary to help them develop the capabilities to truly follow their bliss.

According to the film, everybody receives some sort of mysterious call to adventure or to awaken to a life previously unknown. Not everybody answers this call. However, those that do and then choose to act on this call embark on what Campbell and the film describe as ‘The Hero’s Journey.’

As the documentary portrays in vivid detail from popular movies, enactments of classic tales by a group of sweet and motley group of kids, and first hand accounts from real people ‘The Hero’s Journey’ is filled with a series of tests, trials, or ordeals a person must go through to begin and complete a transformation. Often a person will fail one or more of these tests. But, if the hero remains steadfast and open to unexpected help along the way, he or she will emerge victorious. 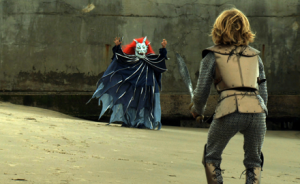 For example, Campbell summarizes this process in “The Hero with a Thousand Faces” when he writes

“A hero ventures forth from the world of common day into a region of supernatural wonder: fabulous forces are there encountered and a decisive victory is won: the hero comes back from this mysterious adventure with the power to bestow boons on his fellow man.”

I had the chance to interview the filmmaker for “Finding Joe”, Patrick Solomon, and asked him what sort of dragons he faced in his personal journey. His answer was very insightful and eye-opening:

“On my own personal journey, there are a lot of challenges in making a movie. I went down this road when I first started this movie. And I shot a bunch of things. I went to Bali. I went to Jerusalem. I shot just a ton of film and interviewed a bunch of people and when I started to put that together it wasn’t working.

So, at some point, I had to admit that this wasn’t going to work and we got to take another path. But, that to me was a dragon. That was months and months of work and thousands and thousands of dollars that I kind of had to let go of and come to grips with the truth that that wasn’t going to work. And, that was a wrestling match and that took months to come to the point of saying ‘okay man this isn’t going to work, you gotta let that go.’ And, I’m glad I did because the movie would be quite different had I hung onto that.”

The rest of our conversation focuses on why he made “Finding Joe” in addition to some straightforward advice for other filmmakers who are trying to make an inspirational or transformational film. You can listen to our entire 9 minute conversation by
by downloading an MP3 of our interview by right clicking on text below.

Finding Joe is truly a transformational film that will help anyone who is wrestling with a personal dragon right now, but knows in their heart that they are on path. Or as Joseph Campbell said,

“Follow your bliss and the Universe will open doors where there were only walls.”