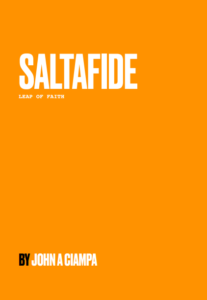 By Professor John A Ciampa

Even couch potatoes have eyes, but rather than see, they sink into easy chair bondage. They evade ascension with the excuse that its only for saints. But on some level we all know that anyone can ascend. We mustn’t be offended by the un-ascended. There is a tendency to love- up and across, but not down. We tend to limit love to only those who can return it, but that is a formula for conflict. It is important for us to understand that the hot heads under the red hats, Trump followers, are not evil; Putin’s murderous soldiers are not evil, just misguided. Plato said long ago: “the only evil is ignorance.” It is important to replace the concept of evil with ignorance; evil cannot be repaired, ignorance can.

You will see in the conga line how Plato’s ideas fed neoplatonism and eventually made sin forgivable for the new Christian faith. There is some argument between different Christian faiths about the sacrament of confession. I must also confess to some confusion about the sacrament of confession. Do-over passes don’t seem to work as a prevention of sins against humanity.

‘Do-over passes and indulgences, were strong marketing points for the Jews who became the early Christians. The old testament had Yom Kipper where the congregation collectively begs forgiveness for their sins, but there were no personal hall passes or indulgences given out. Eventually, thanks to Gutenberg, indulgence became currency that could be replicated.

The new testament’s only mention of confession is where Christ said: “Confess ye one to another.” Voltaire imagines the very first confession where a sinner confesses all his sins and then waits for the priest to confess all his sins. We’re all still waiting . Voltaire imagines the priesthood to have begun when “the first rogue met the first fool.” Voltaire seems to be saying that organized religion doesn’t help with spiritual enlightenment. Voltaire is not in the conga line, but many who are in the conga line would agree with him. Too many pages in the history of organized religion are blood stained. Crusades, inquisitions, jihads, and suicide bombers continue to make war on each other even in our modern world, killing each other in God’s name. Thousands of leaders and billions of followers of organized religions spend most of their time in the trenches of the power struggle and not floating up toward spiritual transcendence. Connection is something we can’t live without and the partitions of organized religion by their very nature prevent connection. Church is a human institution aimed at God; since it is human it is flawed and doesn’t always reach God. I’m not saying never. If God is hidden everywhere and in each of us He is with us wherever we are, maybe even in church. In or out of church, I believe that ignorance is not invincible, because ignorance is not a thing in itself but the lack of a thing, the thing being self respect, self love which enables introspection.

Recently because of the pandemic, the whole world was forced by a microbe to look inward. Never in the history of consciousness, have so many been thinking so much about about the same thing at the same time. We’re all obsessed with security, short term and long term. Short term security worries about man made disaster; long term security about natural disaster. We make weapons for the former and build shelters and discover cures for the latter. What would be your guess on the proportion of time and money spent on weapons for short term security, call it ‘S,’ and long term security in the form of vaccines and cures and levies to provide microscopic and macroscopic protection from natural disasters, call it ‘L’ ? My guess is ‘S’ dwarfs ‘L.’ Whatever your guess, S is larger than it should be. ‘L’ expenditures are justified because natural disaster is unavoidable, but man made disaster is our own folly which we can end the second we figure out how to fill the inner void of hate and ignorance. That makes the S expense the most tragic waste in the human condition.

My new book Conga Line of Consciousness is well reasoned step in the direction of spiritualism. It suggest a personal spiritual expansion that raises consciousness above the unanswered questions of science and the unquestioned answers of religion. It is available free to you if you send me your contact info