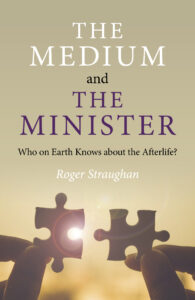 THE MEDIUM AND THE MINISTER by Roger Straughn/ www.6th-books.com

THE MEDIUM AND THE MINISTER examines reasons why anyone should believe in a life after death and the controversies that can arise when these reasons conflict.  It asks who should be regarded as authorities on the subject?  Traditionally, it was thought that the place to look for information about an afterlife was religion and that the experts were priests and theologians.  Christianity offers a clear example of how a particular religious system can strongly influence attitudes towards a possible afterlife, for centuries exercising a monopoly over beliefs about life after death.  This conferred enormous power upon churches and priests, who claimed to have privileged knowledge of what happens to us after death and of the requirements and rituals needed to ensure salvation and avoid eternal damnation

The Church probably maintained its position as the unquestioned authority on the afterlife for so long because there were no real contenders.  This changed dramatically, however, when there appeared on the scene during the 19th century two strong challengers whose influence is still felt today in various ways – Spiritualism and psychical research.

The origins of modern Spiritualism are usually traced back to the events in Hydesville, New York State in 1848 when the two young Fox sisters appeared to communicate with the source of mysterious knockings and other noises in their home.  This episode marked the beginning of the rapid spread and development of Spiritualism, initially in North America and quickly reaching Great Britain and mainland Europe.

Spiritualism was soon recognised as a threat to the traditional role of the Church as the sole authority and intermediary on all matters relating to life after death.   Now that exclusive position was being challenged by the public awareness of an alternative – the medium.  A medium did not need to have any religious position or credentials

in order to offer apparent access to those who had died. Spiritualism was not dependent on theological jargon and it could be enormously comforting to the bereaved.

Religious opposition was not slow to arise.   One favourite gambit was to accuse Spiritualism of being ‘unbiblical’ and of indulging in the forbidden practice of ‘necromancy’. The rapid spread of the movement to Europe was accompanied by  fierce denunciations from all branches of the Church.  Catholic opposition was particularly vehement

The initial response in the UK was more restrained than in many other countries.  The confrontation here came to a head at a later date, following the First World War.  Before this was to take place, however, another development, much less dramatic than the Hydesville saga, was threatening to challenge the minister’s privileged access to knowledge of the afterlife – the rise of psychical research.

The British Society for Psychical Research held its first meeting in February, 1882, and soon attracted the attention and support of the American psychologist and philosopher, William James, who helped to found the American Society for Psychical Research three years later.  From the start both societies aspired to be scientific bodies, adhering to scientific principles and procedures; neither was ever a Spiritualist organisation.  Nevertheless, they shared with Spiritualism the antagonism of some religious traditionalists, who regarded any experimental investigation of psychical phenomena as wrong, because they must be the work either of the Devil or of ‘familiar spirits’, and so forbidden by the Bible.

The main common feature attracting religious opposition, shared by psychical research and Spiritualism, despite their obvious differences in approach and ethos, lay in the emphasis both placed upon mediums and their apparent ability to receive communications from the dead.  Although from the outset psychical research investigated a wide range of other phenomena, studies of mediumship have played a central role throughout its history.

In the UK, events during and after the First World War throw a fascinating light on the clash between medium and minister, at the heart of which were two knights, the author Sir Arthur Conan Doyle and the scientist Sir Oliver Lodge.  Both men were early members of the SPR and Lodge was actually its President at the time of his knighthood.

The War and its immediate aftermath strengthened both men’s conviction of the fact of survival as a result of their personal experiences.  Lodge’s son, Raymond, was killed in action in 1915 and a year later his father published the first edition of a book about the many apparent communications the family had received from him after his death.  That book, Raymond or Life and Death, soon became very popular and controversial.  Conan Doyle also in 1916 threw his weight unequivocally behind the Spiritualist position as a result of a message given to him via a medium apparently from his brother-in-law, who had been killed in 1914.   By 1916, then, both men believed they had a duty to publicize these truths to as wide an audience as possible.  This was a mission which they would both pursue for the rest of their lives and which would put them on a collision course with the Church.

The two knights caught the mood of the time perfectly, as it was becoming increasingly clear that for many people the Church was failing to meet the psychological and spiritual needs of many of the bereaved.  Conan Doyle blamed the Church for ‘cold comfort administered to those who mourn their dead’, and for ‘windy words and dogmatic assertions prevailing in the pulpit’. The Church quickly hit back and a bitter war of words ensued.  Many Church leaders viewed Spiritualism as a new, rival ‘religion’, even though this was not a claim made by Doyle and Lodge, who saw Spiritualism as entirely compatible in most respects with Christianity.  Psychical research was equally suspect in the view of some theologians, but here it was venturing on to dangerous ground.  Psychical research did not rest upon any religious system of faith and from the start had insisted on the need for open-minded, rigorous investigation of phenomena.  Was the Church to object to the pursuit of new knowledge and understanding?  This seemed to be the position being adopted by some influential Church leaders, including William Temple, the future Archbishop of Canterbury, who declared that it was undesirable that there should be experimental proof of man’s survival of death.

The Anglican Church faced increasing pressure during the 20’s and 30’s to recognise the contribution that Spiritualism and psychical research might make to the question of life after death.  Finally, in 1936 the current Archbishop of Canterbury, Cosmo Lang, was forced to take action and a commission was appointed to investigate the matter.  The tortuous story of how this was done and how the Report was belatedly and reluctantly published in 1979 reveals further evidence of the deep-rooted tensions that have continued to exist between the minister and the medium.

The book focusses upon these tensions and upon attempts to bridge the gap between these two approaches.  In doing so it examines a number of detailed case studies describing individuals, organisations and personal experiences.  It also looks at some historical and modern examples of psychical investigations which present particularly convincing evidence of life after death.  It’s up to the reader to decide who on earth knows about the afterlife!

THE MEDIUM AND THE MINISTER is available from www.6th-books.com and from wherever books are sold