By Janis Harper, author of Jonas and the Mountain: A Metaphysical Love Story

Over the course of my life, my practice has vacillated between time spent involved with channeling and psychic material and activity, to time spent in quiet, non-dualist meditation and clear mind. The attempt to reconcile these two paths is the impetus for the birth of my new spiritual-philosophical novel, Jonas and the Mountain: A Metaphysical Love Story.

Is it true that freedom from the illusory, transitory world is the be-all-and-end-all? Is enlightenment the final and most noble achievement and what we should all be shooting for? Are we here to find our way back home, to God, to Source, the one shining Consciousness? Traditional eastern religions and philosophy would back this up for the most part, as well as the more contemporary versions of non-dualism, often associated with those “realized” non-dualist teachers (like Eckhart Tolle and Rupert Spira, for starters), whose message is simple and direct and aimed toward getting you there, waking you up from the dream of life. Often meditation and sitting still are involved.

But, but . . . where is all the metaphysics in this? I’m talking about what’s often associated with the psychic and paranormal world: it encompasses channeling disembodied personalities, angelic and spirit guides, ascended masters, the after-life; it intersects with quantum physics in its multidimensionality, the multiverse and many lives; it acknowledges the illusion of the physical world, the simultaneity of time and (re)incarnations; it encompasses starseeds and walk-ins and alien encounters; it’s the domain of creating your own reality through your beliefs. It’s a lot.

More and more these days, I find these two paths—non-dualism and metaphysics—are being conflated, squished together in the same spiritual sandwich. Sometimes in a Facebook group about one of my all-time fave channeled entities, Seth (channeled by Jane Roberts in the 60s), where members are discussing a particular point made by Seth, someone will pipe up that what’s most important is “We’re all one,” or that the ultimate purpose of everything is to return to Source, to wake up. This comment is often greeted very well, yet it also shuts down the discussion. I’m occasionally driven to point out that this is really non-dualism, not Seth’s metaphysics. And while there might be some common ground, there are also important differences. But the distinction is usually not taken in.

I do find that the world of “creating your reality,” “attracting/manifesting what you want into your life,” even reincarnation, multiple dimensions and selves, etc., is conceptually separate from the non-dual world—where silence, stillness, meditation, and the letting go of the ego-mind into union with one Consciousness is the only game in town. The differences between these two paths to truth have occupied me all of my life: I’ve been trying to discover how they can be reconciled since I was a mystical-metaphysical teenager. In Jonas and the Mountain—which is really an autobiographical novel—I give Jonas the job of figuring it all out.

In the novel, there’s an eastern mystic, a western psychic, and a broken man who falls in love with them both at a holy, magnetic mountain. More than an unusual love story, Jonas and the Mountain is a quest for the deepest truth, an excursion into the nature of reality. Jonas has been living a half-life since he lost his marriage, his college teaching position, and his best friend all at once. In his darkest moment, he hears a voice in his head, and strange poems start to come to him. Curious and open to exploration, he joins a friend who is traveling to Mt. Arunachala in South India. There Jonas meets the guru D, who shows him a direct path to enlightenment, and Anamika, an oddly familiar woman who explains the voice and poems and reveals yet another reality of multiple dimensions and partner selves. Jonas seeks to reconcile D’s and Anamika’s philosophies to find what is true with a capital “T,” as he struggles to resolve the pain in his past and the surprising ways it appears in his present.

Although I won’t give away any spoilers here (do these two paths come together? if so, how?), here’s a taste of how dear Jonas is thinking about this. The following is an excerpt from Chapter 27, in Section V: Paths (Air):

“Path One: If it’s true that everyone creates his reality like an artist, including the gurus and masters, then one needs to open oneself to how one is doing it and why. Learning, exploring, and growing—these are what one does on this path. One does something. The locus of action and control is in you, the fuller you. It’s all about you—you as your individual self and you in conjunction with your greater, multidimensional Self and partner selves or incarnations. The existence of God, or whatever name you want to use, Love, All That Is, Consciousness, is of little consequence on this path, Jonas thinks. He’s not sure about that though—hence his question to Anamika. He’s not sure where this path ‘ends’ either. If it does.

Path Two: But if it’s true that you aren’t really in control of anything—in fact, there’s really no ‘you’ at all—all one needs to do is surrender, relax, let it all unfold as it will anyway, being divinely orchestrated and all. You just receive what’s given; you get out of your own way. If you get caught up in ‘doing’ stuff that you identify with, then you get caught up in the dream, the story, and you remain in the illusory world of subject and object, on the rollercoaster ride of joy and pain, desire and fear. So you don’t ‘do’ anything except meditate and feel the aliveness of your existence, your heart. Be still and silent, and dissociate from the world and activity; and when stuff comes up, you let it burn. And thus the illusion dissolves along with the habits of mind that keep you in your hypnotic trance and maintain the separate ‘I’ character—and your true nature is revealed, which is unchanging, which is Self, God, that shining ocean of love. And that’s where the path ends. It’s all about not-you.

To do or not to do? That is the question. And of course, the age-old ‘free will vs. destiny’ dilemma is tied up in this, too. Path One: You do, you create, you have free will. Path Two: You cease doing, you surrender, you let destiny do its thing without you. Most world religions and twelve-step recovery programs take Path Two: God is in control. Let go, let God. Most ‘new age’ philosophies take Path One: You are in control. It’s your world, make it good, be the change.

He has a sneaking suspicion the bigger problem is that no matter how hard he tries to think this two-path thing through, he’s not going to get anywhere. Is he positing yet another philosophical duality, a Taoist yin-yang circle that should be sent spinning until its two halves blur together into one? It’s probably another one of those problems where a solution just can’t be arrived at intellectually. Both D and Anamika would likely agree on that one, too.” 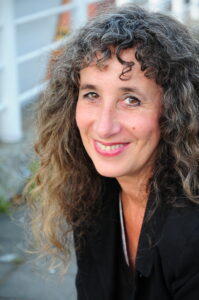 Jonas and the Mountain: A Metaphysical Love Story is available from online booksellers everywhere and by request at your local bookstore. Published by Sacred Stories, October 2021.

Janis Harper is a former adjunct English professor turned expressive arts therapist, as well as a writer, singer-songwriter, and actor. Her lifelong passions for the creative arts, metaphysics, spirituality, and philosophy come together in Jonas and the Mountain. Although she has published mainly nonfiction, she considers this novel to be the truest work she’s ever written. Music from her original folk-roots album Better This way is available everywhere online. https://janisharper.ca