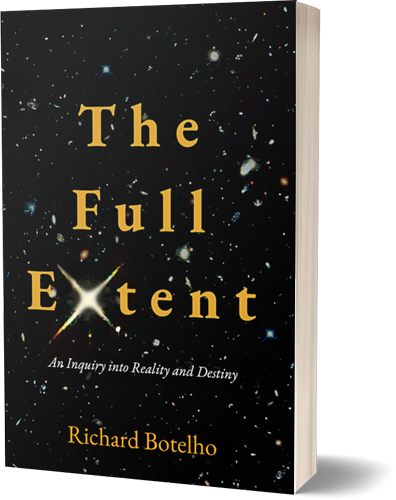 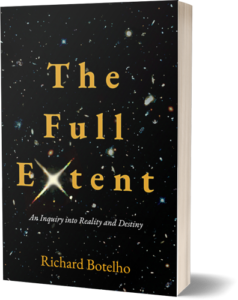 By Richard Botelho, author of The Full Extent: An Inquiry into Reality and Destiny

Reality is not what it seems.

Consciousness is the ground of all being. Physical matter results from Mind.

The grandest experiment in history comes from Quantum Mechanics, and its results—the Double Slit Experiment—are not only astonishing but revolutionary. Everything humans believed about the nature of reality was obliterated with this one, simple experimental result.

In the Double Slit Experiment, electrons were shot at a partition with two open slits (there was a screen behind the partition to record the paths of the electrons). What emerged was a wave-like arrangement on the screen when the expectation was two distinct columns of dots representing individual particles. The results showed that the electrons were behaving like waves, transversing through both slits when they should have traveled through one slit or the other. Remember, a wave could pass through both slits, whereas particles would have to choose one or the other slit. Physicists initially thought the electrons were bouncing off each other, forming the wave arrangement. So, they reduced the electron stream to one electron at a time. When the electrons were fired singularly and slowly (supposedly ensuring their particle-like nature), each individual electron also passed through the two slits. What was thought to be a single particle was behaving like a wave by passing through both slits at the same time. This is the famous wave-particle duality of Quantum Mechanics since an electron is both a wave and a particle existing as one. To this day, there is no satisfactory explanation for this phenomenon.

Obviously, this baffled early physicists. In fact, these findings were so bizarre that physicists tried to peek at the electrons to catch them in their curious behavior. They used measuring devices to view the electrons pass through the slits. Much to their astonishment, when they observed the electron, it behaved like a particle and passed through only one slit. The mere act of observing the electron (called the Observer Effect) caused it to assume particle characteristics and abandon its wave-like nature.

Then some extremely high-level mathematics was applied, and the calculations demonstrated that an electron in its natural state can go through both slits, neither slit, one slit, or the other slit. All the potentials of the electron exist before observation in what is known as a superposition. At once, the electron is everywhere! It does not have a definite state or position. That is also known as the wave function of the atom where the electron exists in many orbital positions above the nucleus (behaving like a wave). Yet if we want to observe the electron at a specific point, the electron appears as a particle (as opposed to a wave) in that exact location and ceases its other potential positions. That is known as collapse of the wave function. This bizarre collapse is caused by the observation made by an observer where literally Consciousness collapses the wave function and forces the electron into one position with nothing more than the intention of a human observer.

In short, our observation of the electron creates its nature. When we are observing, the electron behaves as a particle; when we are not observing, the electron behaves as a wave. Our observation (Consciousness) determines the electron’s properties and actualizes it. Thus, the universe is not a real thing in the materialist sense of the term. As Nobel Prize–winning physicist Neils Bohr once famously remarked, “Everything we term real is made of things that cannot be regarded as real.” Physicists have discovered that atoms and subatomic particles are vortices of invisible energy, perpetually spinning and vibrating, existing in a type of physical void with no actual material structure. Things become real only by connection to Mind.

Thus, the Double Slit Experiment is the definitive glance into reality. Mind compels electrons to become real things, controlling their characteristics and behavior. Without Consciousness observing them, electrons exist only as clouds of potential and would never become actual things. Again, the same dynamic extends to atoms and simple molecules that form the building blocks of the entire universe, so reality is inexorably linked to observation and Mind. Fundamentally, it is Consciousness that brings things into existence by materializing potential into matter. Consciousness creates the universe.

The Supremacy of Consciousness

This puts Consciousness at the forefront as the organizer of existence, arranging innumerable potentials into the one actuality we know as reality. But the question remains—“of whose Consciousness?” Where does this Mind come from? Is this Mind evenly dispersed throughout the universe or located in just one place? We obviously have some of this Universal Mind in us, but we are not its source. Moreover, since the ingredients forming the universe are immaterial and unreal, that fact alone attests to a source that is incorporeal, transcendental, or even spiritual.

Therefore, Consciousness is likely related to Spirit, comprised of the same incorporeal essence. In addition, the Observer Effect noted earlier connotes a first observer where an initial observation (or something similar) brought an entire physical universe into existence. This original observer would possess both mental and spiritual properties, offering considerable challenge to scientific orthodoxy that cannot account for Mind and believes Spirit is ridiculous. After all, science is based on things being physically real, our common-sense notion of reality premised on matter as actually existing in material form. The quantum, however, clearly demonstrates this is false. Thus, the primary ramification of the experimental evidence is that Consciousness is paramount to existence. Nothing is more essential or causative of being than Mind. Max Planck, the Nobel Prize–winning physicist and father of quantum theory, once stated:

When Quantum Mechanics first linked the properties and behavior of the atomic and subatomic worlds to Consciousness, an interesting transformation occurred; where once Mind sought to discover, it now became the discovered. We did not find truth as much as truth found us. Traditional science has renounced this fact because of its revolutionary consequence: Mind is not a product of the physical, but rather the physical is a product of the Mind. Scientific materialists hate this fact (partly because it was derived scientifically), but also because it threatens the entire materialist structure, including the building blocks of nature and our consensus reality.

Put another way, some of our greatest minds are struggling to accept reality. Hence, mainstream science exists in a state of denial, as an acknowledgement of quantum truths destroys their worldview. That cannot be good for the human future.

So, what exactly is Consciousness? Simply, Consciousness is self-awareness, will, intention, and desire. But Consciousness is also an inherent property of the universe. That means Consciousness is designed into the very fabric of reality and transcends time and space. Mind is therefore intrinsic to nature, infused into the totality and actuative of everything visible and comprehendible. As a result, the supremacy of Consciousness necessitates a restructuring of our conceptual foundations. First, consider the following organization of reality according to classic materialism:

• Galaxies form, filled with billions of stars and planets.

• On some of these planets, life happens. Evolution begins.

• On Earth, after billions of years of evolution, humans emerge.

• Consciousness is thus born of materialism.

This framework reigned until the arrival of Quantum Mechanics. What replaces materialism is a revolution. Consider the correct framework:

• Mind therefore precedes the Big Bang and all physical processes.

• Humans have Consciousness as a derivative of First Mind, not because of a physical brain.

Nevertheless, the emerging Consciousness Paradigm must incorporate truths from the previous paradigm. Two realms exist—the material and the immaterial; the latter is foundational of the former. We have traversed the planet in commercial aircraft, explored the depths of the oceans, walked on the Moon, and sent probes deep into space. Modern conveniences like cellular phones and computers make life simpler and more enjoyable. Nevertheless, materialism has failed to provide answers to basic questions of existence and has failed miserably to satisfy our spiritual core. So, we also must expand our understanding of the powers of Mind and Spirit. Consider the following from Brazilian scholar Debora Nunes:

“The new paradigms, both as a worldview and as the basis of the organization of science, are better suited to the characteristics of the world. There are still important resistances, especially in the intellectual environment, but they will be gradually overcome. The new paradigms accept plurality and validate the idea that to better understand reality, several approaches are necessary, several truths can coexist, including some defended by the old paradigm, which may continue to be valid.”

The reality we were all taught to believe in, a physicalist material reality, exists only by virtue of observational and creative Mind. The ostensible realness of existence is a manifestation of original mental and spiritual energy. Mind and Spirit are fundamental forces of the universe, reflecting the original Consciousness of the First Mind or God. In our greatest reductionist tradition (reducing to the smallest possible to discover constituent parts of things) science discovered the quantum and thus discovered foundational Mind. We are fortunate to possess some of that Mind, as well as Spirit, as both together contribute toward our own creative abilities, mirroring the original act of Creation.

In conclusion, we were also meant to be creative, and the lives we live are expressions of our inherent creativity. Reality is fundamentally mental and spiritual, the physical realm nothing more than a stage for the fulfillment of Spirit. Obviously, we are also meant to learn, and from that learning create better opportunities for ourselves. Moreover, our individual creative progress powers the advancement of our society. Thus, we have a responsibility toward our own creativity and the culture we create. What we construct, both individually and collectively, determines our future. Destiny—our destiny—is inexorably bound with original Mind and Spirit and the fulfillment of its desired ends.

Adapted from The Full Extent: An Inquiry into Reality and Destiny by Richard Botelho, published by Windstream Publishing Company, 2022.