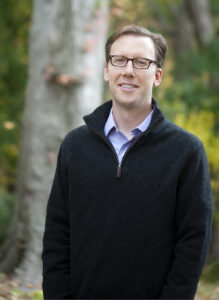 By William Meyer, author of Healing Breath: A Guided Meditation through Nature for Kids

The first few months of the lockdown in 2020 were hard, real hard. As a parent of two little ones, our afternoons and weekends quickly went from playgrounds and play dates to iPads and Paw Patrol.  During the day, I’d find myself struggling to balance my own work with the online schooling responsibilities of my son. I would struggle with him to sit quietly in front of the computer for just a few short minutes as his preschool teacher taught a lesson on Zoom. However, this never worked out as I had hoped. Most sessions ended with the camera being shut off just before my son melted down. Making things worse was the tapestry of what appeared to be eighteen angelic faces, diligently following along with the teacher’s prompts, staring back at us. I found myself wondering what I was doing wrong.

As the months went by, I finally gave up trying to get him to sit for class. It just was not worth the emotional toll. However, without his schooling, I was left with a hopeless feeling. How was I going to occupy his days? The swimming pools and museums that used to fill our weekends were off limits. The mall, which had become a safe haven for early morning outings, was closed. Moreover, playdates with friends were simply out of the question. Without anything to do, I watched my son descend into an endless abyss of screen time.  It was only after a particularly trying outburst during an afternoon nap, when he had figured out how to weaponize the knob of his bedroom door and punctured a hole in the drywall, that I realized I needed to start thinking outside of the box, literally.

I can still remember the first hike we took together. It was about forty minutes north of our house. For me, it was a chance to get him outside and be safely socially distanced. For him, it was an annoyance to his usual routine on the couch and in front of a screen. My expectations were low and my goal was simple: fill a few hours of his day before he inevitably returned to his IPad. After walking for only a few minutes, we soon found ourselves on a trail leading through the ruins of an old Civilian Conservation Corp community. It was new, but nothing surprising. As we moved deeper into the woods, past fallen trees, through ruins and rock scrambles, I started to notice a subtle shift in my son. At first, it was almost unnoticeable, a simple question here, a dash up the trail there, but as we continued deeper into the woods, the emotional dysregulation that often characterized our struggles in the virtual world started to subside. I realized that we were onto something, or better yet, into something.

Over the next six months, weekends and weekday afternoons, every chance we got, I would take him on hikes in the woods, along mountain ridges, and through marshlands. We hiked every trail, every rock scramble, and every mountain we could find in the area. The more challenging the hike, the more excited he would become, often insisting we return the next weekend. The little boy who had so struggled in the virtual world had transformed into a curious little explorer in the natural one. The forest was a sensory playground of stimulation and grounding, a magical balance that seemed to meet his emotional, physical and sensory needs. In addition, the sense of stillness and balanced excitement that overcame him in the woods, lingered with him for hours, and sometimes-even days after.

That fall, my wife and I decided that rather than sending him back to the traditional preschool he attended before the lockdown, we would sign him up for a forest preschool. It was safer and in alignment with what he had been experiencing. To make a long story short, it was the best decision we ever made. His natural curiosity grew by leaps and bounds and his joy for school returned in abundance. The self-regulating power of the woods became his classroom and the trails, his curriculum, we really could not have asked for more. The transformation that began on those hikes was cemented through his education.

Watching Liam grow through his interactions with the natural world did not just change him, but it also changed me. As an avid meditator for over thirty years, I had always sought to nurture a practice of stillness and mindfulness in my life, and even in my parenting. However, what I failed to realize until I began these adventures with my son, was how the outer world was also a tool for accessing the inner emotional and intellectual needs of our inner worlds. The result of this discovery was Healing Breath. It draws upon the breath to transport the reader into a new world full of mountains, oceans, and forests to guide the reader deeper into the inner landscape of their being. This is what I witnessed so clearly with my own son, and what I hoped to offer other children and parents through my writing.

As we begin to emerge from the lockdowns and virtual classrooms of Covid, it seems more important than ever to get outside, to breathe, and to find a little bit of stillness in our lives. Rather than rushing back into our busy weekends and schedules, we might want to try to slow down.  To this day, in lieu of Saturday morning soccer practices, my son and I still pour over trail maps and head off on new adventures. While of course there is a set of normalcy and routine that we all now return to, I hope that same sense of wonder and curiosity that I saw when we went on our first hike together, will always be with him. I hope that through meditation or hiking or whatever reflective practice you use, it helps reconnect you and your children back to themselves and to one another.

William Meyer, PhD, is the author of Healing Breath, Big Breath and Three Breaths and Begin: A Guide to Meditation in the Classroom. He has an MA in education from Harvard and a PhD from NYU and has taught a variety of subjects in urban and suburban schools. More information at www.BillPMeyer.com.

Brittany R. Jacobs, MSLIS, is an author and illustrator of game-based curricula, books, and articles for kids and librarians, including The Kraken’s Rules for Making Friends. Meyers and Jacobs first collaborated on their book Big Breath which was followed by Healing Breath. More information at www.BrittanyRJacobs.com.

A Guided Meditation through Nature for Kids