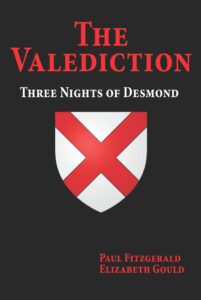 The following excerpt is from The Valediction-Three Nights of Desmond, Book 1, A novelized memoir by Paul Fitzgerald and Elizabeth Gould. For more information please visit www.valediction.net

We are a husband and wife journalistic team who gained access to Afghanistan in 1981 following the expulsion of western journalists one month after the 1979 Soviet invasion. What we discovered was in sharp contrast to the “official” narrative playing on the evening news. Following our story for CBS, we produced a PBS documentary and returned to Kabul for ABC Nightline with Harvard Negotiation Project director Roger Fisher.  After seven years we were so frustrated with our inability to change the “official” narrative, we began to look at the Afghan story from a different perspective and started writing screenplays. It was when Oliver Stone hired us in 1992 to write a script about our Afghan adventure we were forced to look deeply into our personal motivations. While working on the script we also developed The Voice a dream-inspired story about the historical 12th century Anglo-Norman invasion of Ireland, an enterprise largely run by our Fitzgerald family. As we updated Oliver about The Voice he eventually asked us to merge its mysticism into Three Nights of Desmond our factual script. Over time that process opened our minds to a new kind of storytelling as we wove ancient components from Celtic/Irish history with the modern geo-politics surrounding Afghanistan today. The Voice was published in 2001. We continued to write articles and publish books about the complexities behind the Soviet and American invasions of Afghanistan. It was in 2021 we were finally able to weave the whole story together as a novelized memoir titled, The Valediction Three Nights of Desmond.

Few people are given the opportunity to witness the making of history. Even fewer have had the honor of following and interacting with that history as it unfolds and plays out over four decades. It has been our good fortune as a husband and wife team to have done both and in that process to have made the memory of something as impersonal and distant as Afghanistan’s role in ending the Cold War – personal and human.

Getting to that point was not easy. In retrospect, growing up during the Cold War was just a reality we learned to accept. Unlike our parents we grew up as children under the constant threat that our lives could be wiped away by a surprise nuclear attack at any moment. As a consequence our sense of identity evolved in a detached twilight zone between war and peace. Through a succession of undeclared wars and “police actions” in the 1950s and 60s we were numbed to the meaning of real war, of ruined cities and devastated families. Only when the irrationality of Vietnam began to be felt at home, did America’s leadership finally move to lessen the tension.

From 1968 until the end of the Vietnam War in 1975, the first real steps to end the Cold War with the Soviet Union were taken through a process known as détente and by 1979 the effort was approaching its third decade. During that time a series of negotiations aimed at limiting strategic nuclear weapons was embarked upon called the Strategic Arms Limitation Talks, SALT. But as the time approached for the ratification of a second arms control treaty between the United States and the Soviet Union, resistance grew. Following the Soviet invasion of Afghanistan in December of 1979 relations snapped back to the coldest of Cold War levels and it is during this time that our story begins.

This memoir tells the tale of how we came to be drawn to the war in Afghanistan and into what is known as the Great Game for Central Asia. It tells of the dangers and hardships we faced by going against the grain of a revived Cold War narrative; of crossing the line and returning with an eyewitness account that certain powerful interests did not want revealed.

One of the most important of those who did not want to hear that story was our CBS News sponsor. In agreeing to send us to Afghanistan in the spring of 1981 they provided the backing to open up a mysterious front-line state that had been closed to western eyes since the Soviet invasion sixteen months before. Having CBS News as a backer gave us the credibility of America’s Tiffany News Network as it stood at the height of its reputation.

At the time we expected that CBS had an institutional interest in controlling a story of this magnitude having set the tone for international broadcast journalism since World War II. What we did not know was that for CBS’s Vietnam War-weary brass, the story was as personal as it was institutional and that making Afghanistan look like “Russia’s Vietnam” was part of our assignment.

A year earlier CBS Evening News anchor Dan Rather had staked his reputation on a furtive venture into Afghanistan by trekking over the mountains, and was mocked with the nickname “Gunga Dan” as a reward. The Afghan government had accused him of numerous crimes and tried him in absentia. Anything we brought back from Kabul was therefore viewed with deep suspicion.

In the end CBS News did air a limited, unsatisfactory news story of our trip, but for us the adventure had just begun. A second trip followed two years later with international negotiator Roger Fisher for a presentation on ABC’s Nightline. The story that time was the possibility of getting the Soviet Union to end the war in Afghanistan and what we found confirmed our suspicions that the Soviets were desperate to get out.

Our story was a blockbuster and completely invalidated the official Washington narrative which under normal circumstances should have been front page news. But with the Reagan White House bent on keeping the Soviet Union trapped in their  own Vietnam the story was swept under the rug.

From our unique vantage over the years, we came to see the U.S. position on Afghanistan as a contradiction of historic proportions which on the one hand claimed the Soviets had invaded Afghanistan to launch a conquest of the Middle East while at the same time undermining their efforts to withdraw – preferring instead to keep them bogged down in a Vietnam-style quagmire.

We are accustomed as Americans to viewing history through the eyes of powerful “experts” whom we assume know more than we do about any given situation. But our personal experience opened our eyes to the limits of focusing only on facts which in many cases were arbitrarily selected or bent to conform – by these “experts” – to an ideological narrative.

This revelation provoked us in the late 1980s to move from journalism to screenwriting which resulted in Oliver Stone asking us to interpret our experience for the screen. As writers we could finally impact the ongoing narrative on Afghanistan and put our personal motivations into the story. But with the first bombing of the World Trade Towers in 1993 we came to realize that our personal Afghan story had been brought home to America.

What followed broadened our experience into an epic adventure in which we encountered enough Afghan royals, CIA operatives, American ambassadors and religious fanatics to populate a spy novel. This memoir, in sum, is our journey through that experience from the perspective of two Americans from very different backgrounds who came together on an unconventional course and discovered a hidden history that continues to shape our present day.

For more information, to read or purchase the book, visit our website at www.valediction.net