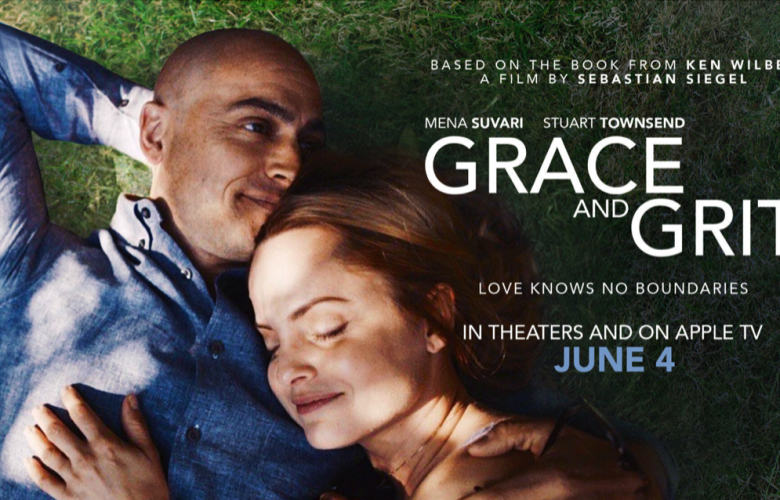 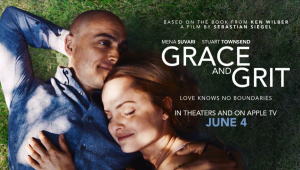 1. What is Grace and Grit about and why did you decide to make it?

It’s an inspiring true story about love beyond life. The book exemplified, for many people around the world, how love may transform us.

2. What were some of the challenges of making this film and how did you overcome them?

Filmmaking is a highly collaboratively process. A key duty of a producer is to apprehend any challenges with a tai chi sort of resourcefulness. During filming we lost a day and a location to widespread fires throughout the area. Once they subsided, I was adamant about us being the first to enter and film in an area where the fires had raged. This was for a series of pivotal dream scenes. Because the fires had juxtaposed burnt mountains, scorched hills, and charcoaled tree trunks, with fresh, bright green grass and plant life it gave the terrain an otherworldly, surreal feel that hinted at the ultimate journey of this character in her reaching beyond life. We were able to use a circumstance that cost us a day and a location as a resourceful opportunity to capture an ambiance that would have been nearly impossible to create.

3. What did you learn about yourself as you made this film?

Making a film of any scope is a process of relearning perseverance. This film is immersive and experiential; audiences are meant to go through a range of emotions *with* these characters. Filmmaking itself is also immersive and experiential – we get to learn from the artists we work with on a project. This film offered additional and specific learning opportunities in that I was fortunate to be able to focus on the authors’ work – even further than I already had – in order to translate his book and story to screen. For anyone who hasn’t read Ken Wilber… he’s the lighthouse.

4. One of the themes in the film is about the transcendence, and “love beyond life.” What does that mean to you? And, how can we create that type of love in our relationships?

Most people, when they talk about love, are talking about attachment. Love is a space and stream that we exist in, and that we can open up to. In transcendent love we have a relationship with God, or Spirit, through our engagement with one another. In the eyes of your friend of lover, is it just the colors of the cornea around a dazzlingly dark, dilating pupil that you see… or is there something else happening there? That *happening *is a miracle, and it is happening with you, for you, and through you. There is an intuition that speaks to us through love, one that guides our actions to do things that we may not otherwise equate as being sensible. It’s a transrational sense. And when we heed it and are willing to surrender to its calling – when we are courageous, selfless, and trust in that omega point-pull to evolve – we can let love guide us, even shatter us, so that in the end it may transform us

Creating miraculous love in relationship starts with commitment, and then comes through faith, discipline, and wonder. Faith means surrendering to the guidance of our deeper intuition – a wisdom within that we may not always be able to articulate, yet that we know to be true. Discipline means putting off what we want right now for what we *really *want; it is the mechanism by which faith becomes action. Wonder is the inherent playfulness and curiosity of the Universe that comes alive when we are loyal to our intuition. It is the magnetic force that gets the party started, and keeps the party going; again and again, and every time for the first time. Like listening to the waves, engaging a kiss, or looking at a flower or a sunset – wonder is the requisite that makes what may be mundane, into something miraculous. We must let go to hold on; let go of the little you – that sometimes fearful and always limited one – so that the big You, that abundant, eternal, and unlimited One can shine through. Intimacy implies staying *in *something. Staying *in *the moment. By wandering we get span, through commitment we yield depth. Wandering seems fresh at first, but eventually we start to see repetitive patterns. Depth however is exciting, because the discovery is within. It yields a new terrain, by new eyes, from a new you. Commitment is the new wandering. Depth is the new span. You heard it here first. Maybe I’ll make some T-shirts for the cause.

5. Grace and Grit tells the true story of iconic philosopher Ken Wilber and his wife Treya. How did you get in touch with Ken Wilber (who is known for being fairly reclusive) to even explore this opportunity and get his story to create the film? Can you talk a little bit about that process and what that was like working with him?

I was influenced by and had read most of his other books before reading Grace and Grit. I had always wanted to meet and interview him though, as you say, he’s reclusive. Eventually we were introduced when I was invited to do a radio show in Colorado. He then gave me a rare interview on Spirit and God in my first documentary film. Grace and Grit, as a movie, then came up in later conversations between us. During the process he trusted me completely and felt comfortable in letting me paint the picture.

6. What sort of feedback has the film got?

Audiences have loved it.

7. Did you experience any serendipity or synchronicity as you made the film?

Yes. I think the wider our eyes are open, the more aware we become of the spectacular patterns that are woven into all aspects and expressions of life. This story, this book, and so this movie – as a continuation of this song – seem to carry a mystical electrical current. From writing the script and casting the actors, to scouting locations and scoring the film, synchronicities seem to hint that the time for this story to be told in this medium is now. There are several extensive interviews on this in Forbes, The Playlist, ScreenRant, CNN, The Boston Herald and others at the film’s website www.graceandgrit.net

I hope this movie – like the book has – inspires audiences to discover even greater depths of love within one another.

*“Grace and Grit is an epic love story. Sebastian’s adaptation of this powerful book stays true to the source… this movie is a testament to the transformative powers of love.” *