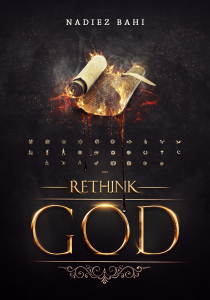 1. What is your Rethink God about and why did you write it?
Rethink God is about a journey of exploration seeking to answer the question of God’s existence detached from pre-set atheist/religious influence dominating the topic today. The reason I wrote it is that I personally struggled to reach my own answers in light of the material available today. So, I took writing this book as my own journey to reach some answers, and hopefully make the same journey smoother for others.
2. How did your childhood and culture influence your book?
I was brought up in a muslim family that was against any form of extremism or following without reasoning. My parents always allowed discussions around religious topics even where it clearly opposed their personal views. This platform for openness is something most people where I was brought lacked the luxury of having. It supported my book writing in being more open to different ideas and opinions on the topic, without sticking to one view as the righteous one that people need to follow.
3. What are some of the most compelling examples or research you found in favor of the existence of God?
First of all, when seeking an answer about the question of God, it’s quite important to have a clear distinction between God of religion and the possible creator of the universe/life. The philosophy and science sections of the book seek an answer about the need for a creator. This creator, for example, can be a programmer in the simulation hypothesis. We need to understand that we can’t aim higher than questioning the need for a creator when using science and philosophy to seek answers. Now the other point is, although human arrogance usually leads us to extending our scientific knowledge at any point to the point of imagining it is absolute. Yet, the truth is, what we could think of today as a reason for the need for a creator can get completely disqualified after 10 years of new scientific discoveries. This happened so many times across the ages starting from the belief that the God Thor was responsible for thunder!
Now that we cleared these two fatal points, the issues that the science of today can’t explain and entails a need for a creator (not God) are : the big bang and the setup of universal constants, the creation of life from chemical elements, multiple aspects of life development and evolution and lastly consciousness.
4. Can you talk a little bit about the philosophical argument that questions the  co-existence of evil with an omnibenevolent, omniscient and omnipotent God. For example, how can a loving and all powerful God allow the existence of evil, pain, and suffering?
I explain in the book that philosophically “good” as an adjective is quite subjective and not absolute, even on human level. I go through the different philosophical schools of explaining “good”, which have significantly opposing views. So, since we are talking about a view from a being that is eternal and not limited by time, then if the act of allowing evil entails more good in eternity (like by eternal heaven reward system), then based on the school of evaluation, the act could be considered a good one. Then, more importantly, it’s a single religion argument based on christianity, as islam for example has 99 names/adjectives for God and “good” is not one of them. So, it’s not relevant in proving or disproving the existence of a creator.
5. What are some of the most compelling examples or research you found  in favor of the existence of God?
In favor of a need for a creator: The start of our universe and our time-space continuum. Universal constants. The origin of life, its continuation, some aspects of evolution like the Cambrian Explosion and other forms of evolution that are not random mutation + natural selection. Consciousness.
6. What are some of the compelling examples or research you found not in favor of the existence of God and how would your respond to them?
If we are talking about God as a creator as I explained above, science can’t really prove a solid answer proving or disproving this God, as he is out of the physical domain we study. Most arguments seeking to prove the inexistence of God merely try to negate the need for a creator like the multiverse theory to kill the universal constants fine tuning proposals. Yet, in reality, the biggest problem with proving the existence of God (not a creator of life and the universe) is rooted from religion; the conflicts between religions, their philosophies, wars, evil driven under their name.
7. What do you think of the role of faith in a person’s belief about God?
I believe that every person must use faith for one purpose only, which is a channel to experience a spiritual experience with the creator, and avoid taking this as an absolute truth or some universal path that every person must follow to be on the righteous track.
8. Anything else?

I have done my research for this book in 5.5 years. My goal is to provide insights and truths to the seeker and not enforce an opinion. I hope everyone eventually ends up finding his/her own answer.