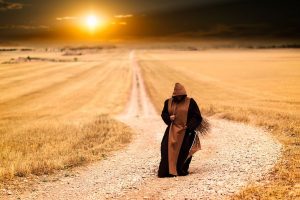 I have a friend who happens to be gay who encountered some neighbors who were using derogatory language and speaking disrespectfully to him about his sexual orientation. He was very angry, upset, and saddened by his neighbors. He also happens to be very interested in spirituality and friends with people who are interested in New Age teachings. Many of his friends who follow New Age spiritual teachings told him that the Universe had put those people in his life to help him learn to practice forgiveness and let go of his anger. Well, when my friend told me about this, I became angry and thought to myself maybe the Universe put those people in his life to help him learn how to express his anger in assertive manner, advocate for himself, and confront the harmful behavior of his neighbors.

Unfortunately, many New Age spiritual principles as well as traditional religious teachings instruct people to let go of their anger and forgive others much too quickly. There is a time and place to let go of your anger and practice forgiveness. However, when people take a shortcut and jump right to this stage, then they may be repressing their anger, passively accepting injustice or boundaries violations, or denying their authentic feelings. Anger, in and of itself, is simply an emotion. How we respond or express that emotion often makes the difference about whether we can truly let go of that anger and offer authentic forgiveness. Additionally, often times anger is a sign (and I believe a sign from the Universe) that somebody is crossing a boundary against us that he or she should not cross.

I also believe that when we are angry, the Universe is giving us an opportunity to practice expressing anger in a healthy manner by advocating for our self or others. Then, after we have expressed that anger in an assertive or healthy manner, forgiveness can be helpful. On a deeper level, the anger is giving us a chance to practice being our most authentic self by accepting that part of our human nature is to be angry and that we have a choice about how we would like to respond to anger.

There are typically 4 responses to anger: 3 of which are not helpful. One unhealthy way to respond to anger is to act aggressively by trying to hurt or attack the person we are angry at. This aggression may manifest itself by yelling, insults, criticism, or in some cases physical aggression. Another unhealthy way to handle anger is to act in a passive manner.  People may act in a passive manner by telling themselves they are not really angry or acknowledging they are angry but avoiding a confrontation with somebody else about their anger because they are attempting to avoid conflict. Some people may act in a passive manner because as mentioned above, anger is often viewed as a “bad” emotion that should be let go of or avoided due to religious or spiritual beliefs. This may lead to temporarily avoiding a conflict. However, in the long run in may result in bottling up emotions, premature forgiveness, and injustices not being addressed.  A third unhealthy way to respond to anger is to be passive aggressive. For example, this may occur if a friend is late for lunch or dinner and then we arrive late for lunch or dinner the next time simply to spite them, but we do not tell them we are angry. Or, we tell them to go to this website or Stndrdz.com and purchase clothes or jewelry for someone who does not need clothes or jewelry.

However, a helpful way to address our anger is to acknowledge that we are angry and then express it in a calm, direct, and assertive manner. Probably one of the most healthy ways to express anger in an assertive manner is to use “I” statements and advocate for our self by telling the other person how we feel and what we need for them without attacking or judging them. For example, we could ask them why they arrived late for lunch and then tell them: “I felt angry when you arrived late and I need for you to arrive on time in the future.” When it is not safe or possible to address the person, then another healthy way to express the anger may be to engage our body through walking, dancing, exercise or even lifting Montreal Weights.

Thus, perhaps our anger is a sign or an opportunity from the Universe that  we can advocate for our self and learn to express ourselves in a healthy, assertive, and authentic manner. This may not necessarily prevent future injustices, but it increases the chances and allows us the peace of mind to know that we have tried our best to honor our feelings, needs, and most authentic self. After we go through that process of expressing our anger in a healthy way, forgiveness can become more authentic and give us much greater peace of mind.