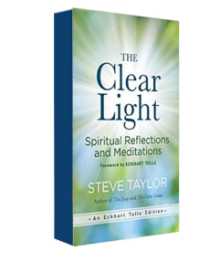 By Steve Taylor, author of The Clear Light

How do you feel about the idea of dying? Is it something you think about often? Or does it make you feel anxious? These are questions many of us have pondered in recent times. The pandemic has reminded us that death is always close by and is an event we will all face at some point.

Generally, though, death is a taboo subject. We’re taught that death is something we should shy away from and try to forget about. If we start contemplating our own mortality – so this traditional wisdom goes – we’ll become anxious and depressed.

Whereas our ancestors would have regularly watched people die and seen dead bodies, we’re shielded from death by modern medical practices. People usually die in hospitals rather than at home and soon after death, their bodies are taken to funeral homes, where we usually have to make an appointment to see them.

But one thing I have consistently found in my research as a psychologist is that surviving an encounter with death – or even just seriously contemplating death – can have a powerful positive effect.

I’ve found that people who survive accidents, serious illnesses and other close brushes with mortality look at the world with new eyes. They no longer take life – and the people in their lives – for granted.

They have a new ability to live in the present, with a new appreciation for small and simple things, such as being in nature, looking at the sky and the stars and spending time with family.

They also have a wider sense of perspective, so worries that had oppressed them before no longer seem important. And they become less materialistic and more altruistic. Their relationships become more intimate and authentic.

And in many cases, these effects don’t disappear. Although they may become slightly less intense over time, they become established as permanent traits.

In my book Out of the Darkness, I tell the story of Tony, a man from Manchester who had a heart attack aged 52, at a time when he was a successful businessman, working 60 hours a week. When he recovered, he felt like he had awoken from a dream. All of a sudden, he was aware of the value of things that he had always taken for granted, such as the people in his life, the natural things around him and the fact of being alive itself.

At the same time, the goals which had dominated his life before – such as money, success and status – seemed completely unimportant. He felt an inner joy and a sense of connection to nature and other people that he had never known before.

As a result of this transformation, Tony decided to sell his business and to use part of the money to buy a launderette. In the local area, he was known as the “launderette guru” because he used to tell his customers about his transformational experience and remind them not to take anything in their lives for granted. As he told me, “I know what it means to be alive, how wonderful it is. And I want to share that with as many other people as I can.”

Encounters with death indeed can sometimes wake us up. They snap us out of a trance-like state in which we are indifferent to life and unaware of the blessings in our lives. But I think we can gain some of these benefits by simply contemplating death.

In the Buddhist tradition, monks in ancient times were advised to meditate in cemeteries, or to sit down next to any dead, decaying bodies they found on their travels. They were advised to contemplate that one day this would be their fate too, as a way of becoming aware of the impermanence of life and the foolishness of being attached to the world.

In one Buddhist text, the Satipatthana Sutta, the Buddha tells his monks that if they see a dead body – one that is newly dead, one being eaten by animals or one that is nothing more than a skeleton or a pile of bones – they should tell themselves: “my own body is of the same nature; such it will become and will not escape it”. In this way, the monk becomes aware of the impermanence of life, and in the Buddhas’ words: “lives detached, and clings to nothing in the world”.

This might seem rather extreme, but we need to remind ourselves of the reality of death. Over the past few years, “death cafes” have been a growing phenomenon. People simply gather together and talk about death, discussing their feelings and attitudes. In my view, this is something we should do regularly. It may not be feasible for us to meditate next to dead bodies, but we should take every day to contemplate the reality and inevitability of death.

Death is always present, and its transformational power is always accessible to us. Becoming aware of our own mortality can be a liberating and awakening experience, which can – paradoxically, it might seem – help us to live authentically and fully, perhaps for the first time in our lives.

Steve Taylor Ph.D is senior lecturer in psychology at Leeds Beckett University, UK. His latest book is a collection of spiritual reflections and meditations, The Clear Light. He is also the author of Spiritual Science, The Leap, Out of the Darkness and many other books. His books have been published in 20 languages. His research has appeared in many academic journals including The Journal of Transpersonal Psychology, The Journal of Consciousness Studies, and The Journal of Humanistic Psychology. He is the chair of the Transpersonal Section of the British Psychological Society.