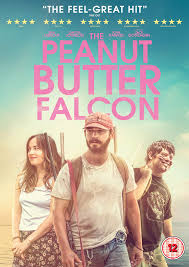 Description: The Peanut Butter Falcon is a feel-good movie. The actors and the script are compelling, and you will definitely love watching it. Discover an insightful look at a movie that impressed audience worldwide!

The Peanut Butter Falcon is a type of film that most people would probably think of watching. The plot revolves around delivering a meaningful message without resorting to the stereotypes found in other movies. The boys are about in their own adventure, and the movie has a good soul that will leave you laughing and crying at the same time.

The Peanut Butter Falcon is an American comedy-drama movie that was released in 2019. It is written and directed by Tyler Nilson and Michael Schwartz, and stars like Shia LaBeouf, Dakota Johnson, Zack Gottsegen, Bruce Dern, John Hawkes, Thomas Haden, and Job Bernthal took part.

The filming of the movie took place in Georgia and North Carolina. The World Premiere was on March 9th, 2019. Additionally, the film was also given a limited theatrical release in the US by Roadside Attraction (an American production company and film distributor), on 9th August 2019.

The Peanut Butter Falcon became a sleeper hit and grossed more than $23 million worldwide. This made it the top-grossing independent film of the year and received many positive reviews from critics. Additionally, Gottsegen was the first person with Down Syndrome to present the Academy Award in 2020.

How was Peanut Butter Falcon made? The movie follows a modern Mark Twain-styled adventure story. The story is about Zak, played by Zack Gottsegen, who has Down Syndrome. He flees his residential nursing home to chase his dream of attending the same wrestling school as The Salt Water Redneck, his idol. Redneck is portrayed by Thomas Haden Church.

In a turn of events, Zak gets paired with the self-destructive Tyler, played by Shia LaBeouf. Tyler is a small-time outlaw who is on the run and faces craziness, similar to the Monkey Madness plot. After some initial reluctance on Tyler’s part, he becomes Zak’s ally and coach, and forms a bond, since they were both Wanted Men. Both elude capture, wind through the deltas, find God, and drink whiskey.

Both also try to convince Dakota Johnson’s character, Eleanor, a kind nursing home employee charged to find and return Zak, to join them in their journey. Eleanor reluctantly joins in their journey, and they start to form a family. All characters had experienced some loss and what constitutes a family is the central theme of the movie.

Review Of The Peanut Butter Falcon

Peanut Butter Falcon, is it a true story? In parts, yes! On the outside, The Peanut Butter Falcon might sound like a straight-faced parody of the most nauseating and quirkiest schematic American Indies. The movie’s first parts could have been grafted straight from the early Taika Waititi comedy like Eagle VS Shark.

The movie is set in a sleepy retirement home in Richmond. From here, Zak manages to escape theatrically from his heavily-sedated lifestyle by watching the old videos of The Salk Water Redneck, his favorite wrestler. Zak develops the urge to join Redneck’s wrestling school and makes his escape, later meeting with Tyler down the line.

This is the first Mark Twain-esque debut feature film by the directors, Michael Schwartz and Tyler Nilson. While it also might not be LaBeouf’s most erratic career choice, it is certainly not his most predictable one either. You will see it abundantly as he walks through the opening scenes cautiously. The movie could not have worked without LaBeouf’s endearing and raw, turbulent performance.

Additionally, Gottsegen should not be forgotten, for he was that one-of-a-kind talent that the co-directors met at a camp for actors with disabilities. Gottsegen was very natural on-screen and kept the movie to the ground roots, even during the most prescriptive and precious moments. He was able to handle his role with enough dimensions and nuance that the very idea of casting an actor for the role would become embarrassing. Gottsegen was funny without becoming the butt of a joke, being sweet without becoming saintly, and being sympathetic without being pitiable.

There was a particular scene where Zak almost got crushed by a boat. This scene was staged very well. Additionally, you could feel the transparency that he and Tyler were getting closer to one another.

However, the movie lost its delicate emotional texture as the plot kicks into gear towards the Peanut Butter Falcon ending. The Church’s inevitable reappearance adds another broken character into the mix, which might make you feel left behind. The script broadens out at the moment that it should be plowing deeper into the ongoing drama. All these unwanted turns are packed, thankfully, in the last 30 minutes of the film. Hence, the movie just arrives at the climax that makes good on its themes.

However, the Peanut Butter Falcon age rating trusts its strength on its characters like Eleanor, Tyler, Zak, and even Redneck. In fact, it can be seen as something of beauty. The most affecting and best aspects of the film are also the ones with the least purpose. The bond between Zak and Tyler is quite believable and rich, as both characters can fit with each other.

Did you see it? Leave a comment below and tell us how you liked it!

Alex Norwood is an experienced traveler and an online entrepreneur. He is very interested in technology and tries to implement it in his life. He runs a successful eCommerce business and is always on the lookout for new lucrative ways to make money online.