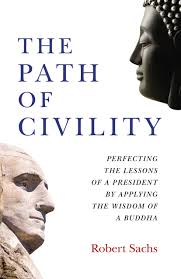 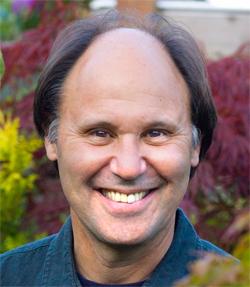 1. What is The Path of Civility: Perfecting the Lessons of a President by Applying the Wisdom of a Buddha about?

I wanted to create a useful guide of wise words and practical mindfulness practices and steps that people can study, reflect upon, and use to improve communication at home and in public, thereby encouraging and supporting wise and sensible solutions now and moving into our collectively very uncertain future.

2. Why did you want to write about the similarities between George Washington and the Buddha and what are some of those similarities?

There are two dominant themes running in my life currently, that I have been a Buddhist practitioner for over 45 years, and a Freemason since 2011.

The Buddha, originally Siddhartha Gautama, was of an aristocratic ruling family close to 500 BC.. He was raised in an environment where ALL daily tasks were tended to by servants.

As the son of a king, Siddhartha received the finest education that was available

Learning about the Fragility of Life in their 20

Washington saw the rugged life of being on and tending to the needs of a farm. He then joined the army and saw many armed conflicts throughout his twenties and later.

After the Revolutionary War, some wanted Washington to be crowned King

After returning from his retreat and victory in attaining Enlightenment, he chose not to assume the title and station of King, even though it was his birthright.

As you may or may not know, George Washington, like many founding fathers we Freemasons. And in the literature and legacy of Freemasonry, particular that of the Scottish Rite, it is said that at its core, one of Freemasonry’s tasks is to uproot Ignorance, Fanaticism, and Tyranny.

The prime directive of the mind science of the teachings of all those who become Buddhas is to transform Ignorance, Attachment, and Aggression.

3. What response would you have to people right now who are critical about the history of the United States, including George Washington, and want to see monuments of him and other United States monuments removed?

It is said – and I now that I have repeated it again and again – that history is written by those who control the pens. In Tibetan Buddhism, there is what is known as “Nam-thar” or sacred biography. In essence it sanitizes the life of those in whom we want to create as usable icons and removes the unsightly or unseemly human flaws. Thus, there is virtually no reference to the fact that in his quest for Enlightenment, the Buddha abandoned his wife and baby son. Was he a “dead beat dad?” And yet, later on in life, they reconciled and his son, Rahula, went on to be a great teacher of what his father taught. Time heals. People transform – especially when they commit themselves to practicing methods of transformation.

In terms of Washington and others throughout history, “air brushing” or sanitizing of this sort has gone on and on. Is the solution to “throw the baby out with the bathwater,” to purge history of the accomplishments along with the follies and errors of individuals and nations? The statues from the Jim Crow era were presumably erected to invoke fear and remind a barely freed black population of their lesser status and the precariousness of their “freedom.” That these are taken down and the names of Confederate soldiers be removed from forts, etc. makes sense if we want every person in the US to be respected and, as Freemasons say, “on the level.” This where the skill of civility in helping to create a healthy dialogue for positive change is useful, if not vital.

4. What is common advice that George Washington and Buddha would to people today who are stressed out at their jobs, worried about COVID-19, and generally feel overwhelmed with the responsibilities and challenges of modern life?

I created a blog for my website, entitled, “Civility in Hunkertown,” focusing on on what words of the Buddha and The Rules of Civility employed by George Washington can be of us when we are “hunkered down.” The Rules of Civility have many useful things to recommend when dealing with people close quarters and when conflict arises. The first Rule is especially useful in that it encourages people to create an aire of inclusiveness so that no one feels disregarded. From the teachings of the Buddha, there are what I enumerate as the Five Steps of Wise Action: (1) step back, (2) assess the situation, (3) reflect on your own feelings and your part in the situation, (4) to engage other in the spirit of being “on the level,” and (5) engage the situation. Just this slowing down and becoming mindful of any given situation/crisis can make it more manageable. Buddhist mind science reminds us that it is difficult to cover the world in leather. It’s easier to put on shoes.

Furthermore, please remind me of a time when conditioned existence was not met with the crazy-making habitual patterns of minds. At the same time, the historical Buddha predicted that this time would be a “Dark Age.” A “dark age” is the accumulation of negative states of mind which bring about mental illness, degenerative diseases, and corrupt, draconian governments rooted in the banal, and are over bureaucratized and self-serving. This is the world we are in. We need to build resilience and seek out those of like mind. One great Tibetan Buddhist teacher, Namgyal Rinpoche, spoke of there being “pockets of light” – small groups of people who hold to what is true and are a beacon to others seeking solace and sanity. I speak of such extensively in 2 of my other books, The Wisdom of The Buddhist Masters and The Ecology of Oneness.

5. When is a time in your life when you struggled and how would you use the lessons of the book during that time? 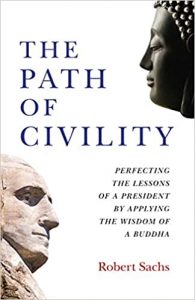 Probably the most visceral application of what I outline in this book occurred when I was learning to work more skillfully with one of my daughters when she was a teenager. The Five Steps of Wise Action led me to a place to be able to problem solve and support her in making better decisions for herself – and made my life a lot less stressful.

6. Have you experienced any serendipity or synchronicity in your life? If so, what and when?

I am not sure. The notion of “out of the blue” has a parallel with the Buddhist notion of “auspicious coincidence.” But, I also hold to the notion and doctrine of karma – where everything that comes our way over a lifetime or lifetimes, the fruition of our attitudes and actions brings us to fortunate and unfortunate circumstances that give us an opportunity to use for further waking up and growth. I know there is the expression “t’s all good.” I tell people who glibly say that that there is “good good” and “lancing boil good.” Back to serendipity or “out of the blue,” I could say that as a result of causes and conditions created over lifetimes, a NEW experience yet to be had arises. Also, experiences that don’t necessarily match up with one current lifetime culture, social reality, etc… can suddenly arise – like my meeting with the 16th Gyalwa Karmapa, having arise the appearance of “unexpected” beings with messages, etc… Past karma? New fruitions?

7. You are an author, healer, and educator with forty years of training and practice under the guidance of Tibetan Buddhist masters, what advice would you have for people who have been meditating for many years, but still have difficulty quieting their mind during meditation?

Buddhist Tantra speaks of the notion of “One Taste.” Sometimes we have a concept around what quiet is suppose to be or feel like. It’s important to be able to rest the mind where it is at – to be welcoming rather than dwell in perpetual disappointment that last week or last year’s bliss experience is not happening now. The British saying comes to mind… “Calm Down. Carry On.”