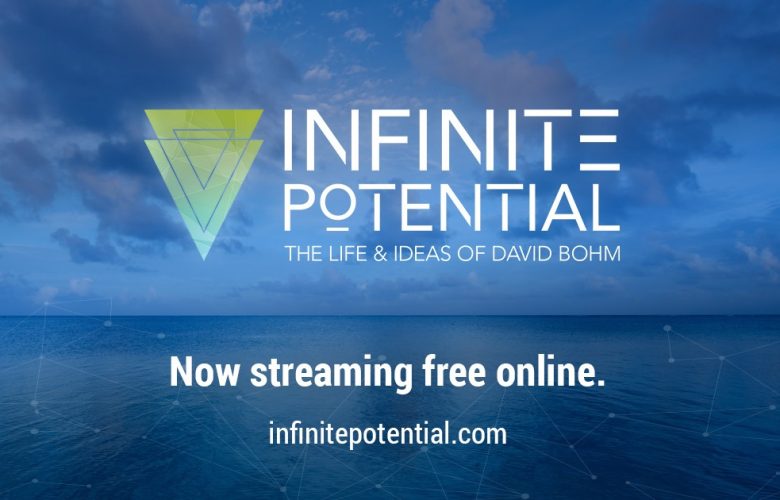 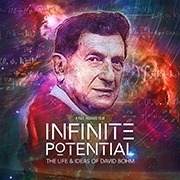 1. What is the INFINITE POTENTIAL: THE LIFE & IDEAS OF DAVID BOHM about and why did you make it?

INFINITE POTENTIAL  is about the life of David Bohm, a physicist,  explorer of consciousness and his extraordinary insights into the fundamental level of reality, meaning that reality out of which our “apparent” reality of space time and sensory perception emerges. Bohm, through these insights answers many of the big questions that have preoccupied humanity since the earliest times, where do we come from, why are we here, what is our purpose, what is reality. He shows us how the quest for knowledge through science and spirituality were, once upon a time not separate, and Bohm offers us answers that provide the possibility to regain our sense of purpose, to regain our sense of wholeness and meaning in life and society.

I made the film in order to share these insights with as many people as possible. I felt that by sharing these insights it may be possible to make people aware of the fragmentation we currently experience in life and in society. I also felt that there is a deep desire in people for a more holistic approach to life and I felt that through the documentary Bohm would provide a kind of signpost, necessary to try to re-awaken in people the possibility of a realignment to the source of production and harmony with nature, to a sense of belonging, to regain a sense of oneness and wholeness and the possibility that exists for personal and societal transformation.

You watch Infinite Potential for free starting June 21 at  https://www.infinitepotential.com/. Trailer is below.

Bohm was well on his way to a very fruitful career in physics and his talent was embraced by the elite in the science community. But through a combination of his outspoken political views, his brief flirtation with communism and his radical ideas in physics, he came to suffer rejection by some of the very people who encouraged his great ability and talent and ultimately rejection by the wider science orthodoxy who remained locked in a more  conservative approach to science and who at the time were more focused on development of the atomic bomb. Robert Oppenheimer famously said “if we can’t disprove Bohm, then we must all agree to ignore him”.  There are many reasons why Oppenheimer and his group came to that conclusion which would require a much more detailed answer, too detailed to get into here. Suffice to say, with the exception of Einstein and a few others, he was shunned by the science orthodoxy and suffered exile at the hands of the American government. And so, many of his ground breaking ideas about the nature of reality remained hidden from the early 1950’s onwards until they were recovered by a young PhD student in the UK who brought them to the attention of his peers. This, combined with the fact that mainstream physics was running up against a brick wall, in part because the famous “theory of everything” was going nowhere. And so physicists started to look elsewhere and started to look again at the ideas of David Bohm. Could they provide the answers that physics was looking for, could they be the key to understanding the nature of reality and our place within it.  And so interest in Bohm was reinvigorated and his “Hidden Variables” theory is now one of the most referenced papers within physics circles today.

Through engagement with the film, I would like people to get to know Bohm and his ground-breaking ideas. I would like them to get to know his humility, his maverick intelligence, the brave scientist who was not afraid to challenge the status quo, and who dared to peer into aspects of reality that were considered “forbidden” by the science orthodoxy.

Bohm’s ideas are pretty much fundamental to just about everything. He gives us a philosophy of life and all we encounter within it that is completely compatible and consistent with quantum theory. He gives us coherence.

I would like people to get to know Bohm’s work in quantum physics, in consciousness and dialogue. All these aspects of Bohm actually feed into one another. Starting with physics we get his ground breaking work on the Quantum Potential, an energy potential that only arises when quantum phenomena appear. This is where the idea of WHOLENESS arises and we begin to learn that each part of the Universe is contained in each and every part. Out of the Quantum Potential we get Non-Locality, meaning that particles, of which you, me, the Universe and everything are made up of, can communicate with one another instantaneously no matter how far apart, from one end of the universe to the other without any signal passing between them. This gives rise to the profound idea that we are all interconnected, meaning we are all ONE and bound together by ONENESS, an idea that the mystical traditions of the east have known about for millennia. The OBSERVER is THE OVSERVED. Western science is catching up. And Bohm is largely responsible for this.

This idea should inspire people to realise, that since we are all so interconnected, it should logically follow that we should take better care of ourselves, each other, our planet and even try and re-imagine our world, our political, economic, spiritual and social structures to that they become much more WHOLE and equitable.

3. In the film, you talk about Quantum Potential. What is that and how is that related to the connection between science and spirituality?

The Quantum Potential is a conscious agent and therefore has a deeply spiritual connection with science, even though there are many within the larger science community  who will deny that. For me, the Quantum Potential is the infinite organising power in the universe. It is an energy or force that arises naturally within the quantum domain in which WHOLENESS is present. It is a force or process that conditions the energy of particles and informs the particles of their context within the WHOLE (meaning the whole Universe). Essentially, the quantum potential is an information potential, and it is the informing action of this information potential that allows our physical universe to be….out of which the local, (our world of space time and sensory perception) and the non-local (described above) emerges. This has deep spiritual significance as the quantum potential can be interpreted as having the qualities of mind or consciousness that is informing creation and the emergence of our universe. This brings us to the crossroads of science and spirituality, where we can acknowledge an unbroken wholeness in the universe, again something the spiritual traditions of the East have known about for millennia.

4. What was it like interviewing H.H. the Dalai Lama, being in his presence and what did you learn about David Bohn from him? 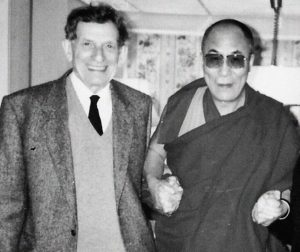 Interviewing the Dalai Lama was a huge privilege for me. Being in his presence I felt calm, I felt a welcoming embrace. Naturally, he welcomed the discussion about David Bohm who he referred to as his “science guru”. Both had a very serious engagement over a number of years. They shared ideas about the Buddhist concept of emptiness which cohered with Bohm’s own views. They shared views about the impermanence of all things   and the nature of reality as emergence.

David Bohm taught His Holiness all about quantum physics. One of the revelations for me was that the Dalai Lama himself had a keen interest in Physics ever since he was a young boy. He told me that as a Buddhist, and as Buddha himself stated, one should always arrive at a position of Faith only after thorough investigation and experiment and not to easily accept anything, but to question everything. He also told me that David Bohm asked him that if a belief was proven to be scientifically untrue, would he – the Dalai Lama – accept it as  being untrue. And the Dalai Lama said YES, he would dispense of something that was proven to be incorrect. So this is evidence that the Dalai Lama is one who questions the truth in all things and that all positions of faith must be based on fact, on truth and not wishful thinking. So His Holiness acknowledged Bohm as one who embraced the concept of relational reality and the essential unity of both science and spirituality. The Dalai Lama himself spoke of wholeness and the parallels between quantum physics and ancient Indian philosophy.

As you may be aware Bohm spent about 25 years having conversations with the Indian Philosopher Jiddu Krishnamurti about the nature of thought and consciousness. Anecdotally, his Holiness told me that David Bohm’s wife, Saral Bohm, told him that she  much preferred the Dalai Lama to Krishnamurti and how she wished David had spent more time with the Dalai Lama than with Krishnamurti. The Dalai Lama was quite amused.

As you can imagine, there was a lot of preparation that went into the interview with His Holiness – production planning, what questions would we ask, crew logistics, travel etc…

But while I was actually in the moment of interviewing H.H. the Dalai Lama, sometimes I would catch my mind wandering off point and telling me “Paul, that’s the Dalai Lama sitting in front of you, is this for real, you are actually having a conversation with the Dalai Lama… possibly the most famous man on the planet”….and then I would pinch myself and get back on purpose again…

What were some of the challenges making this film and how did you respond to these challenges?

One was financial. Raising the finance for this kind of film, a film full of very profound ideas, is always difficult. Why that is the case is a mystery to me as I believe that such ideas, when grasped, can be very liberating for people in that they can open up new perception and help to one to step outside deeply embedded thought patterns that are the result of social and cultural conditioning. People generally seem to want distraction, even though I believe that there is a real thirst for new thinking, new ideas in order to gain fresh perception. Unfortunately, most mainstream media seem to perpetuate this thirst for distraction, instead of trying to engage with people at a more fundamental level. So financing took a long time and was a great challenge.

The other big challenge was what to leave out of the Film. Bohm’s life encompassed so much. His work embraced physics, philosophy, consciousness, dialogue, language. And I felt that whatever approach I would take I could never do justice to Bohm’s life. That was a cross I carried right up until the film was complete.

The other great challenge was to find a narrative structure to tell this amazing story and a way of visualising some very complex ideas. I hope we have achieved that. That in itself was an was immense challenge. 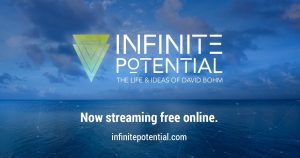 While making the film, I really wanted to do justice to Bohm’s legacy, the physicist and the mathematician. I wanted to show that his philosophical ideas were rock solid and grew out of his deep understanding of the fundamentals of quantum theory and the underlying reality out of which our world of space time emerges. I wanted to get that balance right.

In the end, I hope people will get a sense of the movement of creation, the process of emergence, of unfoldment and of the infinite quality that is present in nature. I hope they will get a sense of our interconnectedness that may inspire us all to take care of each other and to lift awareness about the deep and ever present need to re-imagine our world and this small planet we all share.

Mystics have known about it for Millennia. Modern Science is catching up…and we can thank David Bohm for that.