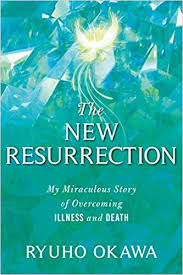 1. The book The New Resurrection:  My Miraculous Story of Overcoming Illness and Death is an autobiographical account of Ryuho Okawa’s self-healing. Can you tell us a little more about the book and when it will be released?

The book is based on Ryuho Okawa’s talk and Q&A revealing what actually happened in May 2004.  This book also carries the appendix of brief history of Happy Science at the back as well as a series of poem he wrote while he was in the hospital.  The books is translation from Japanese version and it will be released on February 15, 2020 (Barnes & Noble, Amazon, Indigo in Canada).

What is very notable is that after he resurrected from his death* he truly decided to lay down his life for the happiness of all humanity and fulfill his mission. Since the resurrection he had established a political party called Happiness Realization Party, opened 2 Happy Science Academy (middle and high school), Happy Science University and 2 entertainment productions, in order to change the existing politics, education and entertainment world closer to God’s ideal.

* Spiritually speaking this was his third death.
1st death – March 23, 1981 when he received the revelation from Heaven and attained the Great Enlightenment.
2nd death – When he renounced his secular carrier and decided to establish Happy Science in July 1986.

2. What is the miraculous power that transcends medical science?

3. Why do some people have miraculous healings and other people die from disease or illness?

It is a difficult question and there is no specific rules nor answers for this but it seems Heaven tends to choose some people to experience healings so that they can bring positive effects on other people as manifestation of faith. We also need to be reminded that all of us has to die at one point eventually without an exception.

4. What is the Great Power that resides within us all?

Creative power as children of God, which resides in our Divine Nature or Buddha Nature within our souls (subconscious).

5. What is the connection between mind, health and illness?

Mind is the driver and the body is a vehicle.  Mind has creative power. It seems 70% illness arise from prolonged wrong (negative) mindset.

6. What is the significance of living by the motto, Today is my whole life!?

Since life is a series of ‘one day’ and on average we have 30,000 days as a life span. Nothing is eternal in this life and we don’t know when our life interrupts thus we should live one day as one life without leaving any regrets.  Therefore we should do our best and give the best of ourselves to others each day. Of course it is easier said than done for most of us but this is how Ryuho Okawa lives each day.

7. Okawa’s near-death-experience was also adapted into the feature-length film Immortal Hero, which was a hit at the San Diego International Film Festival and enjoyed a successful run in several select theatres across the States this past fall. When will it be released on Video on Demand?

Originally from Osaka, Japan, Keiko Hoshino was working at a Japanese financial institution in London when she was introduced to Happy Science in 1991 by a friend. After she moved back to Japan in 1994, Hoshino began working full time for Happy Science. She was ordained as a minister in 2000 and transferred to the United States in 2006 to minister in New York, New jersey, Atlanta, Hawaii, and Los Angeles. In August 2018, Hoshino took on the role of Publishing Director for the US branch of Happy Science’s publishing arm, IRH Press.