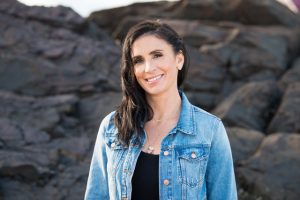 Before Laura McKowen got sober, she had a long, successful career in public relations in the Mad Men-esque drinking culture of the advertising industry, where “liquid lunches were frequent and drinking at your desk in the late afternoon was perfectly normal.” In the five years since she stopped drinking, she has become one of the foremost voices in the modern recovery movement.

In her new memoir We Are the Luckiest: The Surprising Magic of a Sober Life (New World Library, January 7, 2020), McKowen flips the script on how we talk about addiction and encourages readers not to ask, “Is this bad enough that I have to change?” but rather, “Is this good enough for me to stay the same?”

We hope you’ll enjoy this interview with Laura about the book.

Tell us how the title of your book We Are the Luckiest came to be.

Like most people, I thought sobriety was a death sentence. I thought it would be the end of all fun, excitement, joy, sex, travel, relationships, socializing — all the things that made life worth living. I thought the ones who could drink “normally” were so lucky.

Then one night in 2014, thirty or so days sober, I was lying next to my sleeping daughter, crying. About what, I don’t know — everything was at the surface then. But I was there, with her, in our clean bed with soft sheets and the cool air on my face. Sober. Awake. Not running. Not hiding. I was in pain, but I knew it was the pain of being alive and that this meant something. I was living, not dying. I was expanding, not destroying. I knew it was pain with purpose and that — if I stayed with it — it would take me to the place I’d been trying to go all along, which was closer to life, not further away. I knew it was a gift — that it was the gift.

I thought, this is the hardest, but it is better. The magic is in here, not out there. They’re not the lucky ones, I am. We are. We are the luckiest.

I posted something to that effect on Instagram with the hashtag #wearetheluckiest and it caught on. It’s now frequently used as a way to come out sober online and express gratitude for this life. It was the obvious choice for the book title.

While drinking was your thing, you encourage your readers to recognize their things that are standing between them and their biggest lives. Tell us more.

We all have something. It can be big like death, divorce, addiction, illness, or it can be something more socially acceptable like perfectionism or working too much or people-pleasing. The point is, we all have some thing — often many things — that push us to our limits and call us to change.

Addiction was my thing. It brought me to my knees. I thought it was the problem, the flaw—the thing that had gone wrong in my life. But it was actually the doorway to a much bigger, more beautiful and rich existence. This is always the case with our things — they are invitations — even though we don’t usually see them that way.

You encourage people to drop the labels addict and alcoholic if they want. Why?

Because they are mostly punitive. Very few people hear those labels and think something positive or even neutral. They carry a big stigma, a big story, and who wants that? You don’t need to call yourself something in order to address it.

You give your readers permission to forget forever.  Please explain.

Forever was a concept that just seemed so overwhelming in sobriety. Never having another glass of wine, never sharing a cocktail, etc. It overwhelmed me with grief and frustration and it also felt impossible.

The thing is, the only thing that’s happening is right now. We can always do right now. So I just kept it as that until forever didn’t seem so daunting.

What advice do you have to offer those who are choosing the sober life that are triggered by other people’s drinking?

Don’t be around it. You have permission to check out of those things for a while (or forever if you want). I didn’t spend time with people who were drinking for a long time because I tried to do that and it just made me suffer. If I had to for something like a work event, I just kept it really brief. I always had an exit plan and I always let people know beforehand that I wasn’t drinking so there was less anxiety when the time came.

It can be lonely and hard at first, but you will be forced to find new people and seek out new things, which is necessary. Eventually the drinking won’t matter anymore, but so long as it does, you have permission to opt out.

Tell us about the “Bigger Yes” that you write about in the book. 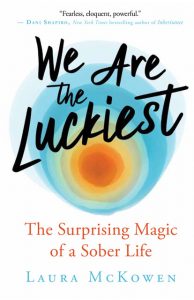 Our unused potential is not benign. When we don’t use what’s inside of us, something dark grows in its place and we get bitter, resentful, depressed. I knew that addiction was killing me in the sense that it was actually killing me, but it was also so painful because I was wasting my potential. We often think of stopping a behavior in terms of what we are giving up, but there’s also something bigger we are moving toward, on the other side — that’s what I mean by the bigger yes.

Laura McKowen is the author of We Are the Luckiest. She is a former public relations executive who has become recognized as a fresh voice in the recovery movement. Beloved for her soulful and irreverent writing, she leads sold-out yoga-based retreats and other courses that teach people how to say yes to a bigger life. Visit her online at http://www.lauramckowen.com.