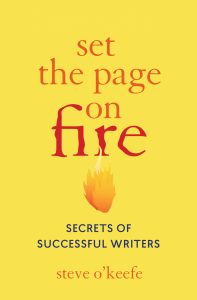 You call this book the first funny writing primer. What makes it so funny?

When you read the language in Set the Page on Fire that some authors have used and still gotten published, you will be cringing and laughing and moaning. Certainly, anyone has a chance to be published if these people were published. My book gives people a break on grammar and spelling and structure (“mechanics don’t matter”) and focuses instead on getting your message or your expertise across. So the writing is more fun. And there are fun exercises, such as “puffensprachen,” the zipper, what does your moon look like, that are easy, non-taxing, fun to write.

You say, “Don’t talk about your writing.” Why not?

You should not talk about writing in progress because talking and writing are so different that talking about your work can damage it. The main reason for this is vocabulary. Verbal vocabulary is one-fourth of written vocabulary. So your spoken summary of your writing is likely to not do it justice at all. Coming out of your mouth, it is likely to sound weak, or trite, or silly, or stupid, but the same idea expressed at the keyboard will come out radically differently, usually with much greater nuance and texture and depth.

Set the Page on Fire has a moving piece of writing about a dog named Robert that readers will not soon forget. It is amateur writing by someone struggling with written language, and yet it communicates so powerfully that a decade after he first read it, my agent said, “I like the story about the dog; we should do that book.” On the other hand, everyone can think of sterile, stuffy writing, like Terms of Service, that might be perfectly punctuated and grammatically correct, but also deadly dull to read. Those are two extremes, but in a broader sense, I believe writing you labor over is often harder to read than writing that pours out of you without filter or fine tuning.

You brushed back against a university policy to include writing instruction in every class. Why?

I believe a policy to force all college professors to become English instructors is racist at worst, elitist at best. In public relations, which I taught, the point is to communicate well, which is often accomplished by breaking the rules of English. I had a student who never spelled out numbers under 10 but used numerals instead. Could I understand him? Absolutely! Should I correct him? I don’t think so. Maybe I would if I was an English instructor. I think it’s important to bend to the communication preferences of your audience. In New Orleans, many of the odd twists of grammar are a result of applying French language rules to English words. Many New Orleanians grow up speaking a mix of American, English, French, Creole, and Cajun Patois. What is considered a sign of low intelligence is often, in fact, the result of a mind that spans many languages at once.

What does Hurricane Katrina have to do with this book?

Wow, that’s too big of a question. I employed six people and Katrina destroyed the homes and possessions of every one of them. That meant the new business plan was to be mobile, and it led to me driving around the North America for four years interviewing published authors. Those interviews infuse Set the Page on Firewith this wisdom that comes from the grass roots of publishing. In October 2005, two months after Katrina, there was a huge cultural reunion at the NOLA Bookfest, the first significant event in the Crescent City after the mandatory evacuation was lifted. I had my best camera crew with me and we filmed some tremendous interviews, including a great moment with André Codrescu, poet, teacher and NPR commentator, who now lives in Brooklyn. Readers of Set the Page on Fire can find all those interviews at the companion website for the book.

Why are you obsessed with interviewing authors?

This is going to sound strange, but I don’t really know how to use a camera. I don’t know how to wire someone up for sound. Good lighting escapes me. What I love is being in the room when it all goes down. I have been blessed to have good camera, sound and editing people around me my whole professional career. I’m a writer; I can’t do that other stuff. But I just love being a foot away from an author, the bright lights behind me, a camera operator cheek-to-jowl with me, asking “Why did you do it?” and “What’s it about?” and “How did you write it?” and “What reaction has been most memorable to you?” I think that every person who has suffered through the publication of a book deserves to at least once be treated like a rock star, like the whole world is hanging on your words. Being interviewed in a recorded and not-live situation where you are free to back up and take a second run at an idea is a real confidence booster for authors.

My worst interview was in the first batch in 2004, with vampire novelist Poppy Z. Brite. I could not get him to smile, which I have to have in every interview for the still image, or “poster frame,” you use on YouTube. The best was children’s author Robert Munsch, of Love You Forever fame, in his publisher’s offices in Toronto. I was told to expect non-cooperation, but we got along famously and my camera person was inspired and my sound person just nailed it. Scariest is tricky, because a lot of people write about loss and a lot of their losses are profound. There is good advice in Set the Page on Fire about writing about loss. The one that gives me chills to this day is Joel Agee, son of writer James Agee, and quite a literary figure on his own. He has a story like no other. I had not great lighting for that video, which gives it a haunting affect.

What’s the number one secret of successful writers?

Tenacity. Of the people I’ve interviewed, the average time it took to get a book published that sold 10,000 copies is eight years. Yes, you can self-publish tomorrow, and all the readers of Set the Page on Fire are encouraged to publish with me, by sending me an original description of the moon, which I have been posting on the book’s companion web site. We have about 20 moons up and 20 more moons in and we’re going to keep putting them up as long as it stays interesting. So you can get published today, but to get either self-published or commercially published at a level where you sell 10,000 copies of your book, that’s probably going to take eight years out of your life the first time around. The good news on the back end of that is that 100% of the authors I interviewed were happy they did it, and more than 50% were planning on publishing another book, so even though it takes forever, the life satisfaction generated is worth all the hassle.

You say it should only take 40 hours to write a book. How is that possible? Why did it take you 25 years?

It would only take you 20 hours, I bet, because you’re in communications and probably a good typist. The average speed of the North American high-school graduated typist is 40 words per minute, according to massive sample sizes of typing speeds. That is 2,400 words per hour. An average length for a novel is 80,000 words. Mathematically, the average typist should be able to type the average novel in 33.3 hours. I’m being generous with 40 hours and saying, even if you’re a bad typist, you can write a book-length manuscript in 40 hours at the keyboard. Hand-written, it should take no more than 80 hours. Writing is not thinking. There’s a good chapter in Set the Page on Fireabout the differences between reading, writing, thinking and talking. Only one of those activities involves spanking the alphabet. It took 25 years to get this book published, not to write it. I could type it in a day if I had to, I know it all by heart.

Tell me about Maggie Strange and how she used your Four-Part Pitch to get published.

Strange things happen! Maggie was a bridesmaid at my nephew’s wedding and she heard I helped writers so she asked. When you see the Four-Part Pitch in my book, you’ll see how she intuitively used it against me. She was a novelist, she said, though she had not yet written a novel. In fact, she had not written anything. No short stories published. No articles in the hometown paper. Nothing in her college literary magazine. Not so much as a letter to the editor. So coming up with the “credentials” paragraph of the Four-Part Pitch was an exercise in creative writing. Maggie used the pitch, got in front of an editor at Random House, used that connection to land a big-time agent, who then placed her with Simon & Schuster. Without ever having published anything — that’s how good this pitch is — that’s how good Maggie Strange is. She has all the talent in the world and she’s headed for a big career as a writer.

What’s in your Four-Part Pitch and how come it works so well?

It’s deceptively simple. The key is to keep it short (four paragraphs) and to start with flattery. You have to know someone to flatter them effectively, so it requires you learn who your editor or agent is before you pitch to them. My wife, collage artist Deborah O’Keeffe (two f’s, long story), labored for years to get a serious novel seriously published. It never occurred to her to look into her would-be editor or agent, read up on things she or he had done, their high points, their schooling, before pitching.  Many authors are so focused on the great work they are doing they forget to look up and see the person on the receiving end of the pitch as a human being, someone with a history and a future you want to be a part of.

Set the Page on Fire: Secrets of Successful Writers