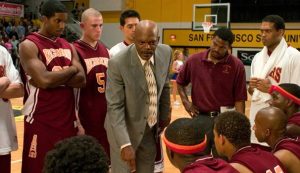 A good sports movie offers much more than entertainment. It is often a statement of human triumph against insurmountable odds. When watching inspirational sports movies, we can’t help but identify with the underdogs, struggle with them, fight with them, and finally cheers when they triumph.

Days after watching an inspirational movie, we still find ourselves thinking of the courage and strength displayed, and the resolve of the human spirit to overcome adversity. A truly inspirational movie can challenge us to better ourselves and double our efforts in order to overcome the difficulties we encounter on our way. With that in mind, here is a list of the top 5 must-see inspirational sports movies:

This true inspirational story introduces us to 17-year-old Michael Oher, a struggling student with nowhere to call home. Michael struggles with life, but he has one thing going for him. He is extremely tall and big bodied which gets him enrolled at Wingate Christian School, in the hope that he could get into athletics.

At the school, Michael is befriended by a student called SJ Tuohy. The Tuohy family invites him to their home where he spends a night and later Thanksgiving. Eventually, they take over his guardianship and hire a private tutor to help him bring up his bad grades. They encourage him to try for the football team. He performs exceptionally well and joins the University of Mississippi eventually being one of the top NCAAF betting picks, and subsequently drafted by the Baltimore Ravens in the NLF.

This heartwarming story transcends the explosive issue of race, where a black young man is taken in, loved and guided by a white family. It shows that everyone has potential and often times what we all need is someone to believe in us and give us a helping hand.

This 2010 film is about hard work, honesty, fairness and courage, starring Jackie Chan and Jaden Smith. It is a remake inspired in the classic of 1984 and follows a similar storyline.

12-year-old Dre Parker and his mother move to Beijing, China, where it doesn’t take him long to encounter the local bully and karate student Cheng. During a game at the park, Dre starts a conversation with a beautiful violin player which angers Cheng so much that he beats Dre up.

One day Dre pours dirty water on Cheng and his friends, prompting them to chase him and beat him up mercilessly. He is saved by the maintenance man in his building, Mr Han, who is an accomplished martial artist. He starts teaching Dre Karate and other life lessons. Dre participates at a Karate competition following a dare and beats Cheng and his team at their violent and unfair game.

Set in the other side of the world, this 2009 film stars Morgan Freeman as beloved South African President Nelson Mandela and Matt Damon as François Pienaar, a rugby icon in the country. It is four years after Mandela’s 27-year prison sentence, and South Africa is torn by racial hatred and divisions stemming from apartheid.

The president decides to try and heal the divisions with rugby, a predominantly white sport at the time. He approaches the coach as well as the rugby union, and they start preparing for the 1995 Rugby World Cup despite scepticism from many quarters.

The team begins to make friends with fans and gradually feelings thaw, and all South Africans black and white start supporting them. They accomplish the impossible by winning the rugby world cup beating giants such as Australia, France and New Zealand.

This emotional movie depicts the value of forgiveness even under difficult circumstances, teamwork and trust. It reminds us that if we forget the colour of our skin, we can achieve great things.

This tear-jerking film reminds us that even in the most difficult circumstances if we unite and stay strong, we shall be able to rise again.

One evening as the Marshall University football team returns home from a game their plane crashes killing all 75 on board including the players, coach, staff and trainers. The university president is set on suspending the football team but is convinced not to do so. A new football team is formed, and a coach hired to train them. They overcome many odds to rise again and start playing other university teams.

Matthew McConaughey plays the leading role in the biopic, as the lead coach Jack Lengyel and Matthew Fox plays his assistant, William “Red” Dawson. A must watch!

Nothing like a tough coach who is not afraid of controversy to instil discipline in a football team! When he starts coaching the Richmond High School team, Coach Carter finds that the players lack discipline, are rude and disrespectful. He gives them tough new rules to follow, including attending all their classes and also teaches them how to play a disciplined game.

When they don’t improve, he shuts down the gym until they can bring up their grades. This decision is so unpopular that he is asked to quit as coach. In the end, the players stand by him, and they bring their grades up and continue playing well.

This movie is especially important for parents, teachers and guardians. Sometimes ‘tough love’ is needed to show young people the way. This movie is about believing in your convictions even when others think you are wrong.

It is inspired on a real story, from coach Ken Carter, who is portrayed in this movie by Samuel L. Jackson.  Channing Tatum and Rob Brown are also part of the cast.