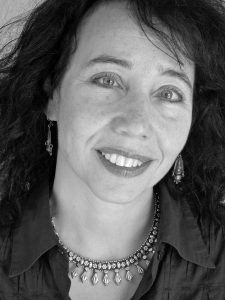 What is the significance of the title Guesthouse for Ganesha?

Essentially we’re all visitors here, staying for only a short period of time. This is not dissimilar to residing in a guesthouse, which has a more transitory feel than a house. And Ganesha, while omnipotent and ever present, “visits” people’s lives to directly assist and guide when necessary. As he does with Esther.

The beautiful Rumi poem “The Guest House,” which prefaces my story, fully and brilliantly captures this belief.

This novel reflects a range of life-long interests and personal passions, most especially that of eastern philosophies and perspectives overall and the Hindu God Ganesha in particular.

The significant spark that conceived the gist of this story was finding out, at the family lunch following my grandmother’s funeral, that she had been abandoned at the altar by her true love when she was 17. I only knew my grandmother as a mean-spirited, bordering on nasty, woman. It was difficult and unpleasant to be around her. Trying to be understanding, I attributed that her experiences during WWII—having to give up two daughters, leave her husband and home, struggle to survive, etc.—had hardened her irreparably.

But, no, it had been love. More precisely, lost love, devastated love, abandoned love—something most of us inevitably experience—that had made her callous, unyielding, relentless, and self- absorbed the rest of her life. This informed all her actions. Yet also, and importantly, it made her a survivor.

Learning this compelled me to honor her ordeal.

But, I felt this story must be couched in the largest context possible—reflected by, and with the views, insights, and perspectives of not just an omniscientnarrator, but a Hindu God. It seemed the ideal coupling of my interests and my protagonist’s journey.

What did your process look like for writing the part of Ganesha?

My research was extensive. I studied the Hindu Pantheon overall, but of course focused on understanding Ganesha. I studied him in religious and historical texts, academic journals, fiction, non-fiction, and children’s books about India. I wanted to learn about and capture as much knowledge as possible from a wide variety of perspectives. I thoroughly enjoyed this process.

I loved introducing Ganesha and invoking his voice, thoughts, beliefs, background, perspectives, and humor throughout the novel.

The book takes readers on a journey through Germany, Holland, Paris, France, Switzerland and India. To what extent was the setting of the book informed by your own travel experiences?

I knew my novel would culminate in India and start in Köln, my mother’s place of birth. Given the historical time period in which the story is set, I explored the most likely cities that would provide safe haven—at least for a period of time—and the likeliest routes for Esther to traverse. Of course, she had Ganesha’s direct assistance, which helped ease the journey on many occasions.

I am a longtime dedicated and passionate traveler with close family in Germany and friends and colleagues all over the world. Travel, the world, and its kaleidoscope of people and cultures and perspectives are a never-ending source of joy and fascination for me.

That said, I’m also very much a visceral writer, one that, as much as possible, has to, so to speak, ‘breathe the air and touch the ground’ that I write about. I’ve been to all the countries Esther travels to, although not always the exact locations her story takes place in, but most. I’ve been to India twice. A huge part of my first trip there was traveling the land Esther would cross—from Bombay/Mumbai and throughout Rajasthan.

What do you hope readers will take away from the book? 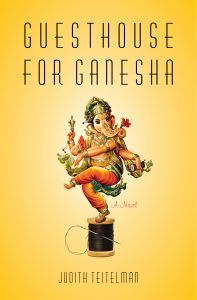 Greater understanding of the connections and inter-connectedness between all human beings—as they say in India: “same, same, but different”—as well as the possibility and probability that there is more—much more—than most people typically see and/or allow themselves to experience.

And, when they finish the last page, I hope readers feel full. Fulfilled. Peaceful. Present. Like the feelings one has after a vigorous yoga class followed by a deep, restorative savasana (corpse pose)—“a fully conscious pose aimed at being awake, yet completely relaxed.”

Also, hopefully, readers will feel a sense of relief and completion for Esther. Perhaps surprised by the ending and where the journey takes her, a spiritual denouement.

What are you working on now?

Frankly, I’m primarily working on getting Guesthouse for Ganesha out into the world and honoring its journey as it is destined to unfold.

I do have a second novel, Future Memories, which I began a few years ago, that has mostly been languishing. In brief, the “overlay” story is about a big city girl and a small town southern boy. But it’s really about memory and why certain, seemingly incidental experiences stay with us, while other, more monumental experiences, dissipate.

I miss writing and the process of shepherding the unfolding of a story. I look forward to turning my attention back to it when things settle down a bit.