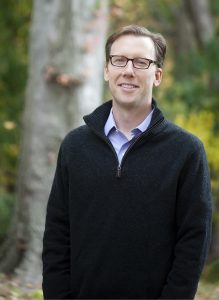 William Meyer has long taught history, economics, and humanities in urban and suburban high schools, where he has also taught meditation in a variety of forms. He has worked with fellow educators in workshops and professional development courses, is the author of two published middle-reader novels, and is currently working to augment his MA in education from Harvard with a PhD from NYU. More information at BillPMeyer.com.

How do you respond to critics who argue that meditation is a religious practice?

It has its origins in many world religions, but the practice of directing one’s attention and focus is not in fact an exclusively religious act. Many of us are focusing on different aspects of our lives almost everyday from phones, to social media, to the news, but we do this unconsciously. Meditation differs in that it asks us to direct that focus in a mindful and intentional way. One might choose to focus on a spiritual element, but they might also decide to target that intention toward a problem, or a relationship, or a goal. In this work I’m looking to expand the notion of meditation as a broader intentional reflective practice that empowers students to be authors of their own lives. They no longer need to be dependent on others, or victims of mind wandering, but rather gain control over their thoughts in a proactive way.

Do you have any specific stories of student meditation in the classroom that have surprised you?

Almost every time I sit in a circle and ask students to share their experiences it surprises me. Their honesty and vulnerability is often way beyond anything I could expect from adults and at times maybe even from myself. However, one story in particular really surprised me. I led a group of students on a guided meditation back in time to deepen their research process. One particular student said he only saw a building in his meditation, nothing else. I suggested he draw it and see if he could find something similar online. Sure enough he came back the next day with an image that matched his drawing almost perfectly. The building turned out to be the residence of a key figure in his studies of the Thirty Years War. The meditation literally changed the direction of his research, but this wasn’t all. He eventually moved back to Sweden where he was from. While at boarding school his friend invited him over to his house for the weekend. The house was the same building he’d seen in his meditation. This story was way beyond anything I could have imagined from a simple classroom meditation. It literally sparked a multi-year journey.

Where is the strangest place you have ever led a group of students in meditation?

I have meditated on the school lawn, in the cafeteria, even on a labyrinth, but the strangest and probably coolest place has to be the Tor at Glastonbury. I was lucky enough to lead a group of students to France and England a few springbreaks ago. At the end of the trip we found ourselves in Glastonbury on the western coast of England. We hiked up to the top of the famous Tor, a druidic formation that has sparked countless theories and speculative explanations. We climbed up to the top as a group and when we reached the tower, the other teacher with me suggested we meditate. I gathered the students and they laid down in the grass next to St. Michael’s tower. I can’t remember the details of the meditation, but I remember drawing upon the imagery of the landscape and sky. It had a powerful impact on the whole group and brought everyone closer together.

What is the largest group of students you have ever led in meditation?

The largest meditation I’ve ever led was for a group of about three hundred students at the end of a wellness day in the school auditorium. It was a pretty cool experience as I partnered with a musical guest who had run a series of workshops earlier in the day. As I led the meditation of both students and faculty, the musician created an etheric soundtrack in the background. It was incredible. You could have heard a pin drop it the students were so enraptured.

Do you find it easier to meditate with students or teachers?

In the short term teachers are easier because they tend to be more polite. They never snicker and will usually sit there quietly the first few minutes. However, once students get beyond their initial discomfort they tend to go much deeper than adults. They don’t have all the extra layers and defense systems in place. They are far more willing to go to vulnerable and open places if that is where the meditation leads.

How do you answer a student who thinks meditation is boring?

Initially it might feel that way and in part I think this is a defense mechanism. I often start with breath work, but by the end I usually try and make the meditations feel tangible and real to the students. I try to draw upon visuals and connect with issues in their lives; stress, friendships, identity, and family. These topics and themes seem to connect with many kids and often through meditation they are able to gain a perspective on an issue that they weren’t able to see by simple rumination. Once a student has this tangible experience they are usually hooked and even more willing to go deeper and further in the next meditation.

How do you respond to critics who think there is no time in the school day for meditation?

I teach AP classes in my school and I also teach college level seminars. I feel the pressure to cover the content just as much as anyone. However, it means next to nothing if I can’t make time at least once every few days or even weeks to pause, to reflect, to relax, and to connect. Numerous times students have come back to my room years later with little recollection of the content we covered, but a vivid memory of the meditations we engaged in. Learning has to be personal, it has to be connected to the person, the heart for it to be lasting. The current demands and speed of the curriculum and the outside pressure has reached a fever pitch. However, the outcomes are far from what anyone would expect or want, anxiety, depression, fatigue, sleep disorders. Our inability to find time or place for meditation is symptomatic of a larger inability to find the self or honor the child in the day.

How long have you been meditating?

I started meditating when I was about thirteen, crazy, but true. I’m turning forty this fall so that would mean I’ve been meditating for twenty-seven years. Now, I can’t say that my practice has been continuous that whole time, but it has been pretty steady. It only takes a week of not meditating to really get me out of sorts and I find myself itching to get back on a cushion. Today, I have really tried to honor that need within myself, just like I might honor going for a run or getting some fresh air, and I just find myself a lot more centered and balanced.

I went to the public library and saw a book on meditation. It was authored by Ram Dass. I remember reading it and then a book by Jack Kornfield. I tried meditating by myself and fell asleep on my bedroom floor. Yet it was my uncle who got wind of my interest and took me down into Detroit to meet a Buddhist monk. This took my practice to the next level. It was like someone pulled me out of the fog and said here is how you do it, this is how you sit, here is a mantra, give it a try, and sure enough it began to have an almost immediate impact on my life.

How has meditation impacted your teaching? 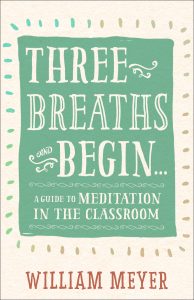 There is a technique to teaching and there is an art as well. A lot of the research and professional development today focuses on the technique, but I’d argue that the art is even more important. A big part of that art is the intuitive components of teaching, knowing when to ask a question, knowing when to shift a lesson, or knowing when to just wait a few seconds longer to let a student really share how they are feeling. I believe that meditation moves me deeper into those intuitive aspects of my teaching. It makes me more centered and balanced and I just find myself at the right place at the right time, sometimes saying the right thing or asking the right questions. I become more of a conduit for something bigger than myself when I’m meditating, and less trapped in my mind and my ego.

How do your student’s parents feel about meditation in the classroom?

My parents have always been really supportive and very curious about my work in the classroom. My mom was a teacher at both the college and high school level and recognizes the value of these practices at both ages. My dad worked in corporate America but has always had an open mind and eye to the power of contemplative practices. In fact he has come with me on several visits to monasteries, and retreats related to meditation. Their support has no doubt played a huge role in my own growth, but also my willingness to take the risks to bring these techniques into the classroom.